Snow White and the Huntsman: Who knew? Announcement! Magical film making is not dead! It simply ate a bad apple and fell into a coma for a bit while we suffered through a decade or so of dippy fantasy bombs and action flicks that looked like a million bucks but felt like a million naps. 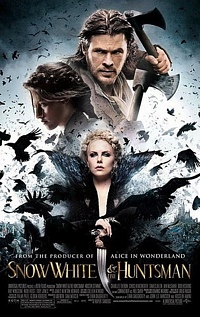 Snow White and The Huntsman transcends, nay, EXPLODES all expectations. I positively, absolutely knew I was in for a boring and predictable couple of hours, punctuated by Kristen Stewart’s shudders and quivers. And I couldn’t have been more wrong.

No, that’s not true. I was right about the shuddering and quivering. But everything else was a glorious surprise. This retelling of the Snow White fairy tale expands upon the terrifying aspects of the original legend—from evil, heart-eating queen (played by a pretty chilling Charlize Theron) to SW’s flight of fear through a forest that seems to be actively resisting trespassers.1

Both of these aspects of the film get the royal treatment when it comes to CGI. Evil Queen and Forest of Bad Trips do things like turn convincingly into a flock of birds and cause you to believe your fingers are melting, respectively. But the happy, fun stuff is well computerized, too. Snow White and the seven spoiler alerts traipse through the “home of the fairies,” who are whistling while they work or play or whatever fairies do, and the moss-covered glen that is their home is strewn with gorgeous magical flora and fauna that brings us right back to imaginative trailblazers like Legend and The Neverending Story (there are even what seem like direct references to both. Fellow nerds! Shall we discuss?).

Around about sometime in that fairy glen, the impressionable teenage part of me that I’d managed to leave behind in the mid-90s burst triumphantly forth. Let’s just say that the urge to don a crushed velvet medieval-type blouse was strong.

But SW&TH is not just about stunning visuals of the real and not-so-real variety. It’s well-directed, well-acted, and weaves in some basic yet satisfying movie tropes so artfully that it feels like you’re discovering these devices for the first time.

And the women! Hoo boy, can they kick some ass. Unfortunately, the conflict boils down to, “Which pretty lady is the prettiest,” although the writers did their best to add some less shallow undertones. The characters are also a little one-sided, but these things are forgivable. How often do you get to see a film reach its narrative peak with armed combat between two powerful women?

Even the ending is good. I, for one, totally didn’t call the fact that Samuel L. Jackson would show up, hinting that Snow White should join forces with similarly misunderstood princesses Ariel, Jasmine, and Cinderella. But now looking back, it seems inevitable.

So many reasons. I haven’t even touched on the adorable burly genius that is Chris Hemsworth and the understated romantic aspects of what could easily have been an over-the-top love triangle. Evil Queen’s Evil Brother’s haircut, giant trolls, pools of milk, and breathtaking scenery!

Kristen Stewart. She’s passable as an innocent in trouble, and she’d be awfully cliche as a Leia-type sassypants, but the rest of the film is so good that it deserves a better-acted heroine with a little more depth.