The extra half star is for the movie poster, which is actually quite pretty! See, things aren’t SO bad!

All right, let’s be honest here, we all knew going in that this movie was going to be bad. But there’s a certain kind of bad that is good, such as, say, Bring It On. Cruel Intentions. Legend.*

Red Riding Hood is none of the above. But let’s be positive! What it is is a film that is one half star better than the last few pitiful attempts by M. Night Shyamalan. As a matter of fact, this may rank somewhere in between The Last Airbender and The Village. You know what they say: second-to-last is the first non-loser. 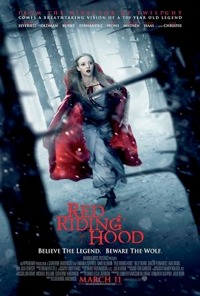 Red Riding Hood’s director, Catherine Hardwicke, had the extreme good fortune to make the first Twilight movie, a film I have resisted the urge to see for no good reason other than that I worry I will really like it and then be forced to reexamine everything I believe in.** As everyone knows by now, vampire movies rise from the grave just about every decade to capitalize on our simultaneous and contradictory desires to remain innocent while also experiencing the unknown. These films and TV shows and whatnot are largely marketed to women, and, consistently, teenage women. That’s not a new thing with Twilight, of course. In the 80s, there was Lost Boys, and in the 90s, the magnificent Interview with the Vampire.

However, trends wax and wane. Vampire culture is becoming a little played out again, and there are zombies waiting to shamble out, and delight us all (they represent the fear of losing our free will, you know).

So Hardwicke, being a savvy businesswoman, moves on to werewolves. The principle is similar: should I let this terrifying yet fascinating and powerful thing bite me? Do I want to join him in his nocturnal bad boy thing? Or do I want him to be the one who saves me?

It’s all so complicated! Only it’s not. The movie is set in a little village in a forest that, if not the Black Forest, seems very much like it. Amanda Seyfried plays Valerie, the most beautiful girl (and most talented actor) in the village, which was brilliantly christened “Daggerhorn” by screenwriter David Johnson. There’s been a werewolf plaguing the town for some time. Who could it be?? Valerie’s hot boyfriend, Peter (I got that joke!) or her hot suitor, Henry Lazar (I think that’s a joke)? What about her formerly hot grandmother, played by Julie Christie? Or Father Solomon, the werewolf expert who looks an awful lot like Gary Oldman, only there’s no way that he could have been duped into starring in this film. Right?

The options are limitless! And I have to admit, the wolf’s identity did surprise me slightly, but not in a way that I cared about. The rest of the film is too distracting in its awfulness. Daggerhorn seems like it was hastily thrown together on a soundstage from a TV adaptation of A Christmas Carol, only with digital forestry behind it. Each line is torturously wrenched from the actors, who must have been wondering what 13-year-old was really behind this production even as they accepted their paychecks and went home to take a hot shower. Surely even the most susceptible of teenagers would see through this drivel for the marketing piece it is, I thought. Surely they hear the laughter ringing out from every corner of the theater every time the actors mention the “strange musky smell that’s all over someone who’s been tainted by the wolf.”

But as the credits rolled, the row of 14-year-olds in front of me got up to leave, wiping their eyes and blinking in wonder. I made a mental note to go home and try as hard as I could to find some quality stuff to promote–stuff that would uplift and enlighten girls of an impressionable age, entertaining them while still engaging them intellectually. I just knew that somewhere, something existed, whether it was a book or a movie, that would be fun while still being clever. And I was determined to find it.

Well…it turns out that instead of doing a lot of righteous research, you can waste a LOT of time rewatching moments like these on YouTube. And you know what? Screw it. I turned out OK, and so will you, teenage girls.

* Legend may actually be good. I don’t know. I love it, but I was a teenage girl when I saw it, so don’t take my word for it.

** Just because I know about the vampire formula, doesn’t mean that I am immune. (True Blood’s Eric, am I right?)