The 10 year wait for Donna Tartt’s new novel has come to an end. 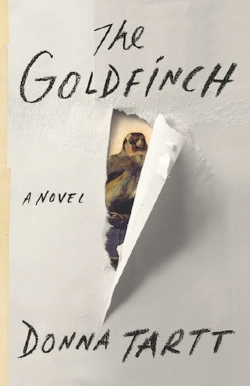 When thirteen-year-old Theo Decker narrowly escapes a terrorist attack at the Metropolitan Museum of Art that kills his mother, he takes with him a small, famous painting known as The Goldfinch. As he is shuffled between the ritzy Park Avenue apartment of a family friend and his absent father’s empty Las Vegas suburb, Theo keeps The Goldfinch at his side–both a memento and a chain. Yet, when he grows up and into the practice of art restoration, Theo’s connection to the painting unintentionally thrusts him into the underbelly of the art world.

Much of The Goldfinch is a fantastic journey through American culture and lifestyle. From the wealthy, overly connected families of Manhattan living in richly wooded buildings to the hollow homes of Las Vegas, separated by spaces too big to fill with more empty homes. Tartt fills each page with spotless descriptions of the people and places that Theo encounters, making it simple to fall into his world and become part of his increasingly knotted life.

It is the ability to blend her rich descriptions and brilliantly developed characters that makes Tartt’s novels so compelling. What starts as a book focused on the close relationship between Theo and his mother expands to include a wide cast of characters, each with an intricate background. Yet, in the end, none of the time spent drawing these connections feels wasted; they feel like relationships built in real life.

Understandably, anecdotes on the heftiness of the text and comparisons to Tartt’s classic debut, The Secret History, are high on most reviewer’s lists when discussing The Goldfinch. But both seem to distract from the novel itself, as Tartt’s third book has pushed her to a point worthy of deeper conversation. Ignore the name on the cover and the page numbers in the corner. Take in The Goldfinch for what it is: a breathtaking and engaging novel that combines the best of everything we seek when we pick up a book. 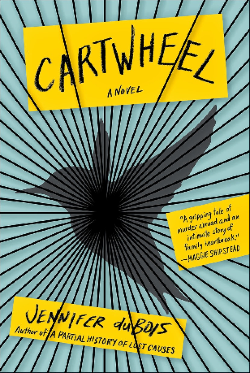 Lily Hayes imagines her semester abroad in Buenos Aires will keep her constantly surrounded by exotic language, food, men, and stories. Instead, she finds herself living with a distrusting local family and boring American roommate. Eyes focus on Lily when her roommate Katy is found brutally murdered early into their stay, with telltale emails, witnesses, and DNA all building a seemingly open and shut case.

Though the story seems to share roots with the Amanda Knox case, Lily’s tale moves off in several unexpected directions. Cartwheel is much more than an echo of tales already told. duBois uses each of her characters, particularly Lily’s father Andrew, to raise questions about parenthood, marriage, culture, and justice in honest, insightful prose.

She did not know to regard the absence of comfort with fear–partly because she wasn’t particularly materialistic or entitled, but partly because she did not believe, not really, that such a state could ever truly be permanent. And that was entitled, Andrew saw now–that expectation of the universe’s benignity.

In this follow up to her widely hailed debut novel, Jennifer duBois guides readers along the line between belief and doubt, showing that it often blurs far beyond what we’re capable of seeing ourselves. 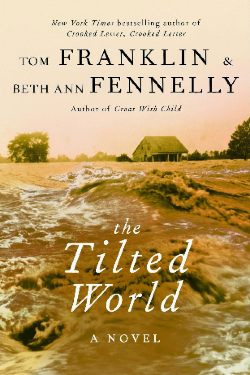 As the Great Flood of 1927 threatens the Mississippi Delta, Prohibition agents Ted Ingersoll and Ham Johnson arrive in the town of Hobnob, Mississippi searching for a pair of agents who have gone missing. What they find instead are the remains of a robbery gone bad and an abandoned baby. Determined to find a home for the child, Ingersoll is told to take him to Dixie Clay Holliver, a local woman still grieving the loss of her own son. Though Dixie Clay and the agent feel an immediate connection, Ingersoll will soon discover he’s stumbled upon the best bootlegger in the county and her increasingly dangerous husband.

Dixie Clay knew now that the world was full of secret sorrowing women, each with her own doors closed to rooms she wouldn’t be coming back to, walking and talking and cutting lard into flour and slicing fish from their spines and acting as if it were an acceptable thing, this living.

Co-written novels can easily become peppered with disjointed phrases and jarring plot holes, making the venture a risky one. But husband and wife team Franklin and Fennelly combine both their storytelling and their vastly different styles to make The Titled World a gorgeous blend of grit and tenderness.

Much of the novel’s balance seems to come from the fact that, while the story centers on one male and one female character, neither is held down by the gender stereotypes of their time. Much of Ingersoll’s story focuses on his paternal instinct toward the child he finds as Dixie Clay takes on the typically male role of moonshining while she begins questioning her early marriage.

From two treasures of writing, The Tilted World is a gripping snapshot of American history sure to please long time fans and new readers alike. 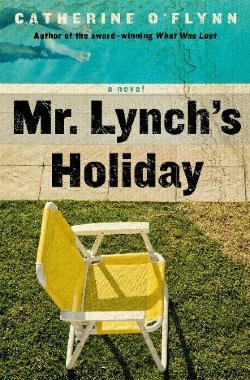 Still feeling the impact of his wife’s death, retired bus driver Dermot Lynch makes the rash decision to leave his home in Birmingham, England and drop in on his son, Eamonn, in Spain. Lomaverde, the village Eamonn and his suddenly absent girlfriend, Laura, chose as their home is a ramshackle ghost town of half-finished skeletons, inhabited only by a patchwork of odd immigrants. While Dermot wakes each morning hoping to spark the father-son relationship he and Eamonn never had, his son is more concerned with winning back Laura and tying up the fraying ends of his own life.

Though Dermot and Eamonn make up the center of O’Flynn’s story, Mr. Lynch’s Holiday is layered with themes far beyond the disconnected father and son. In subtle flashbacks and side plots, the novel weaves in questions about immigration that each of the characters approach differently depending on their backgrounds. O’Flynn highlights some of the inconsistencies in the ways outsiders are approached throughout the world, without preaching or losing track of the novel’s core.

Catherine O’Flynn has crafted a novel rich with connections and nostalgia, written with a breadth of life experience and filled with endearing characters. For those seeking an entertaining but fulfilling read, Mr. Lynch’s Holiday is a trip well worth taking.