Make room on your shelves for this month’s debut novelists. 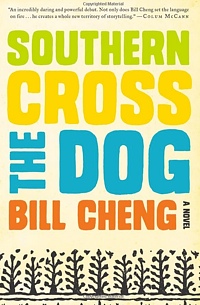 After losing everything in the Great Flood of 1927, Robert Lee Chatham ventures throughout the Deep South, settling in brothels, swamps, and labor camps. His life is changed when he meets a blues piano player who teaches him to keep his evil contained. Still, wherever his journey carries him, Robert refuses to abandon his belief that the devil is close behind, marking him for death since childhood.

The world Bill Cheng has created in this novel is incredibly well developed, a difficult task considering its size. Spanning over a decade and dozens of locations, readers are shown a gritty, beautifully visualized landscape. Though Robert’s travels jump back and forth in time and place, the imagery makes location an easy mark.

I started smiling when I read the first few lines of the prologue to Southern Cross the Dog and was almost giggling over how good it was by the end. Those few pages are Cheng’s way of raising a flag, letting readers know that he has entered the genre. I imagine you’ll see few reviews of the book that don’t at least mention William Faulkner or Flannery O’Connor, as Cheng has written a novel that almost seamlessly fits into the Southern Gothic canon. Yet, somehow, he’s branded the work with a style that feels uniquely modern–much like poppy, vibrant colors on the cover of a rather haunting story.

A Constellation of Vital Phenomena 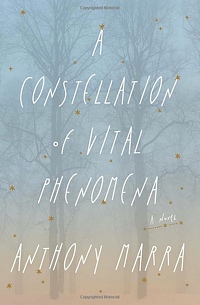 A Constellation of Vital Phenomena begins in a small, war-torn village in Chechnya in 2004. Eight-year-old Havaa has been left alone following her father’s capture by Russian forces. Her neighbor, Akhmed, takes her to the town’s shell of a hospital, where he makes an agreement with the remaining doctor, Sonja, to help him care for the young girl. The novel weaves back to 1994 to trace the roots of the Chechen Wars and the personal histories of its characters, which wind up being more connected than they realize.

Anthony Marra’s prose stunned me from the first sentence and it didn’t let go. With perfect balance, he is able to create an incredible picture of a place very few readers are familiar with, while also finding specific, unique voices for each of his characters. From the start, I was struck by Havaa’s snappy wit and bold charm. In the face of an impossible situation, her attitude quickly made her one of my favorite characters of the year.

Her father was the face of her morning and night, he was everything so saturating Havaa’s world that she could no more describe him than she could air.

After the introduction of his characters, Marra follows them back to different points in the Chechen Wars from 1994 – 2004. Rather than feeling disjointed, it reads like a fluid journey that slowly reveals the binding, eventually heartbreaking, threads between each of the novel’s characters.

A Constellation of Vital Phenomena is a gorgeous debut revolving around a modern war that is written like a historical classic. If this is Anthony Marra’s starting point, it’s hard to imagine how far he will go. 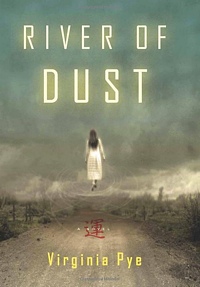 River of Dust begins in rural China in 1910, as an American missionary couple watches in horror as their child is taken from their doorstep by a group of Mongol bandits. Though the Reverend and his family are among the first Christians to return to China following the Boxer Rebellion, he is determined to find his son and sets off into the dangerous plains, leaving his pregnant wife, Grace, behind. As the Reverend loses himself in his new nomadic life, strangely connected to the people he encounters, Grace must survive with only her faith and the family’s Chinese servants to guide her.

Virginia Pye has a stand-out voice for creating fantastic imagery and the plains of China seem to be waiting for her narration.

The Reverend loomed over the barren plain. He stared at the blank horizon as if in search of something, although to Grace’s eyes, nothing of significance was out there. Sunset burned his silhouette into a vast and gaudy sky. Standing tall in his long coat on the porch above his wife and son, he appeared to be a giant—grand and otherworldly.

River of Dust peeks into a corner of the past rarely examined by historical fiction, which is a refreshing change. Even beyond a new setting are the bigger questions raised by the world Pye introduces readers to; imperialism, evangelism, and faith swirl around the novel from front to back without leaving the story feeling like it has a religious agenda.

Based on the journals penned by her grandfather while serving a similar mission in China, Virginia Pye has written a novel blending a rich, historic setting with an engaging story that explores the limits of faith. Richmond has yet another writer to add to its growing list of accomplished novelists. 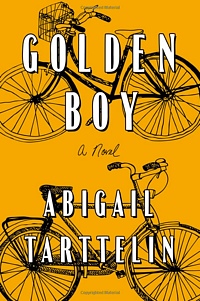 Teenager Max Walker’s life appears to be perfect: he’s attractive, exceptionally intelligent, and popular; his parents are both successful lawyers. But when Max was born with identical male and female chromosomes, his parents chose to raise him as a boy and help him to keep his secret. A devastating betrayal by a friend forces Max and his family to begin dissecting the decisions they have made in the past while increasingly important decisions threaten to destroy Max’s carefully designed life.

Golden Boy is told in alternating points of view, cycling between the people closest to Max. Each of the narrators gives readers a different lens to view the incredibly difficult choices that have had to be made throughout his life. While Karen wants nothing more than a happy, “normal” life for her son, Steve can’t shake the feeling that none of these vital choices have been theirs to make. The voices of Max’s younger brother and of his love interest remind us that humanity, not gender, lies at the core of relationships. And trying to anchor Max while forces attempt to pull him in opposite directions, is local doctor Archie, a refreshing tone of level-headed reason.

With a family so determined to give him a normal life that they never discuss anything about his childhood, Max’s life is designed around secrets. When caught in a horrific situation, keeping secrets is understandably Max’s first reaction. As the consequences begin to snowball, it is Max’s honest, confused, and enraged voice that breaks my heart.

But debut novelist Abigail Tarttelin’s voice makes me hopeful. While I’m not idealistic enough to expect a book to change society overnight, Golden Boy certainly feels timely. She has created a character that readers can truly empathize with, which has the potential to make even the most reluctant reconsider their prejudices or assumptions.