What a long, cruel summer without the ballet, eh? Pine no more, dance fans. The Richmond Ballet is back for the 2011-2012 season, beginning with the first iteration of their Studio Series, A Tribute to Igor Antonov.

What a long, cruel summer without the ballet, eh? Pine no more, dance fans. The Richmond Ballet is back for the 2011-2012 season, beginning with the first iteration of their Studio Series, A Tribute to Igor Antonov.

Antonov, who was handpicked by Richmond Ballet artistic director Stoner Winslett as a promising young dancer from the Donetsk Ballet in Ukraine, has spent 20 years on the RB stage. As he makes his shift from principal dancer to teacher and coach, Studio One celebrates Antonov’s career with company-danced selections from his most memorable performances.

What that means for the audience: a lot of really different, bite-sized pieces of ballet history, featuring our favorite dancers as well as newly introduced company members and apprentices. As usual, the Studio Series leaps across a wide spectrum of techniques and talents to provide us with a program that continually renews itself while we watch. It’s thrilling, it’s evocative, and, it’s the best way to experience the ballet. 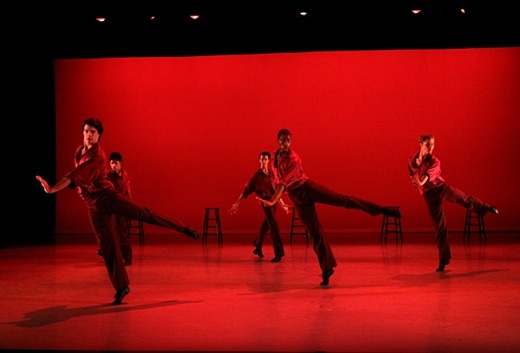 The Antonov tribute fits seamlessly into the Studio format, with classic numbers alongside contemporary works. Highlights for me were the “Nuevo Tango” excerpt, choreographed by William Soleau and premiering at Richmond Ballet in 1998, and Malcolm Burn’s “Pas Glazunov”, which premiered in 1991. The former set features favorites Lauren Fagone and Thomas Ragland amid new company members and apprentices in a spicy little number involving wooden stools and silk shirts. The latter was Maggie Small and Fernando Sabino doing that thing they do where we all stare at them with our mouths open as they express a bunch of feelings while at the same time performing incredible physical feats. A spectator sitting behind me tapped my shoulder during the intermission and whispered, “Maggie gives me chills.”

OK, I’m pretty sure that lady just thought I was someone else (I’ve never met Maggie Small, and I wouldn’t presume to be cool enough to be on a first-name basis with her), but I wouldn’t be too, too surprised if she just wanted to chat about what the crap just happened up on that stage. In fact, my mother, who had tickets for this past Saturday’s performance, just called to have that very same chat. And because she gave birth to me, I’ll give her credit for the following line instead of stealing it for myself. “That Fernando Sabino,” she gushed. “He just commands the stage. He practically swallows it up!”*

It’s fairly incredible to watch, as was Shira Lanyi’s portrayal of the Black Swan. Our formerly sweet little Giselle flapped those nefarious imaginary wings and outright toyed with Thomas Garrett in the “Black Swan Pas de Deux” from Swan Lake.

The second half of the program took things in a more chipper direction with the Balanchine/Gershwin revue “Who Cares?” While the more cheerful stuff isn’t quite in my line, we finally, after all that build-up, got to see Antonov squire leading ladies like Valerie Tellmann, Maggie Small, and his own fiancée, Cecile Tuzii. On closing night as he did on opening night, Antonov will perform a self-choreographed epilogue that neatly ties each end of his career together with a bittersweet bow.

As for the RB, they’ll miss his on-stage skills, but they have so much going on that they’re sure to still heavily rely on his expertise. Several apprentices graduated to company status this year (Trevor Davis, who had a strong start in the “Apollo” excerpt, Ariel Rose, and Julie Smith), and new recruit Thomas Bettin hails from the Suzanne Farrell Ballet in DC. I caught up with Bettin afterwards to ask what drew him to the Richmond Ballet. His reasons for auditioning turned out to be pretty simple: “I really liked the work they were doing and their facilities were amazing, so I asked around. Everyone had only good things to say about dancing here,” he said.

He’s not the only one who’s taken an interest in the RB lately. In an announcement that indicates just how freaking good our city’s ballet is, Winslett told the opening night crowd that they’ve accepted the invitation to perform a yet-to-be-determined program at the Royal Opera House in London in June of 2012.

*That’s not only verbatim, it was entirely off the cuff. My mom’s probably for hire on a freelance basis, other media outlets.