Everyone is beautiful and they dance around transfixingly. It continues to be unfair, but as you see more and more, you mind less and less.

Though perhaps less well known to the occasional ballet-goer than The Nutcracker or Swan Lake, Giselle enjoys a solid place of honor among the classics. And it’s with good reason that Richmond Ballet includes it as its “storybook” production this spring—the costumes and sets are teeming with pastoral loveliness and romance is most certainly in the air.

Duke Albrecht, as dukes are wont to do, falls in love with a beautiful country lass named Giselle, an innkeeper’s daughter who suffers from frail health. Albrecht is engaged to the princess Bathilde, but everyone knows that rustic gals are much more thrilling than stuffy princesses. However, affairs of state (or something of that nature) must be considered, and instead of Albrecht breaking it off with Bathilde, he just keeps on having cake and then eating it.

I won’t say what ensues, but let’s just say it involves some angry maidens who aren’t, when it comes down to it, alive.

Richmond Ballet doesn’t mess around, ever, from what I can tell. The scenery and costumes are magnificent as usual, particularly in the second act, which is so much a ghostly forest filled with ethereal spirits that you almost feel chilled. At the same time, surrounded by the old-world glamour of the Carpenter Theatre, Giselle’s ornate trappings evoke a truly classic mood.

And the dancing’s nothing to sneeze at, of course. RB’s usual suspects share the stage, swapping roles nightly as is usually the case for their big productions. Shira Lanyi was charming as ever and perfectly cast for the sweet and forgiving Giselle* opposite Thomas Garrett as a gorgeously fluid Albrecht. In direct juxtaposition with his luckless fellow suitor Hilarion, moodily danced by Phillip Skaggs, Garrett’s Albrecht seemed to lack some passion, but it all came to the surface in act two, during which the duke is torn apart by grief, guilt, and some mandatory cardiovascular activity. It’s Myrtha, the queen of the ghostly ladies, who’s demanding that Albrecht dance until he can dance (or breathe) no more. She’s played by Valerie Tellmann, who surprised me with her alluring snake in The Nutcracker this year and continued to show striking versatility as the stone-hearted, intimidating judge of all deadbeat douchebags. 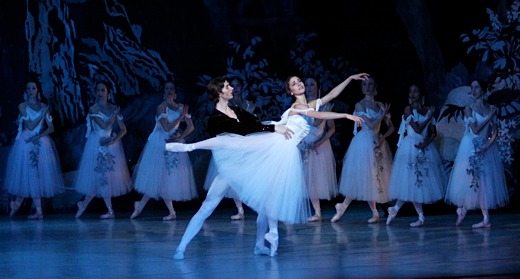 Other standouts include my favorite duo, Maggie Small and Fernando Sabino. They caught my attention in Studio 2 as Adam and Eve, and they held it as the SPF and her BF in The Nutcracker. So it was exciting when they emerged as Giselle’s peasant pals and danced a pretty pas de deux. And, I keep saying this, but even as one of Giselle’s troupe of similarly dressed friends and then later as one of Myrtha’s solemn attendants, Cody Beaton always manages to light up the stage with an energy that’s impossible to repress.

One note for parents: while Giselle is certainly more kid-friendly than the ballet’s Studio Series, I’m not entirely sure a production like this is really suited for small children. Not because of the ghosts and the dead jerks, but because, unlike The Nutcracker or Cinderella, there’s not a lot to engage them beyond all the pretty people dancing. I do not say this because I doubt your child’s intellectual capacity, I say this because we had to listen to multiple kids shout “WHAT’S SHE DOING? WHAT’S HAPPENING? WHO’S THAT?” and (my favorite) “THEY SURE ARE DOING A LOT OF DANCING!” while their mothers desperately tried to hush them and enjoy the show. I do this for you, mothers. Enjoy the show. Hire a babysitter.

Giselle ran for only one weekend, but I fully recommend checking out the more intimate (and to me, more fascinating) Studio Series. I’ll be attending that series’s two remaining productions under a false name, since I just used “douchebag” in a Richmond Ballet review and effectively undermined my secret plan of becoming Stoner Winslett’s best friend and worming my way into the ballet community. Like Albrecht, I get carried away.

*A little TOO forgiving, if you ask me. Come on, Giselle! Hilarion brings your mother presents and doesn’t secretly intend to marry princesses! If those aren’t things you value in a man, I don’t know how to help you.