Pitch Perfect: Acaseriously, you should see it. A group of misfits attempts to defeat their slick rivals for the grand prize in a cutthroat competition that’s always been just out of reach. 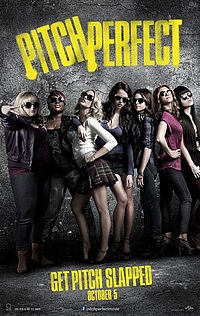 It’s not a new plot–we’ve seen variations before: Bring It On, Drop Dead Gorgeous, and every sports movie ever. And while those films have cult followings of their own, Jason Moore’s Pitch Perfect has something they don’t. Actually, it has something that many comedies these days don’t: superfresh, smart writing by Kay Cannon that (almost) never feels recycled and (hardly ever) misses a beat. Oh, oh! AND it features a bunch of strong ladies who not only aren’t competing with each other sexually, they’re trying hard to be best pals while they rise to the top of a male-dominated competitive performing art. These chicks unapologetically jump on the Bridesmaids bandwagon of female-dominated, Bechdel Test-passing humor, and good on them for doing so.

Anna Kendrick is Beca, a Barden College freshman who’s unfazed and unimpressed by frat dudes, stone-cold roommates, and pretty much any college trope. She’d rather hang on the quad and make mashups1 on her Macbook.2 Beca’s nails are black and her eye makeup is smudgey, and the best thing about her character (possible spoiler alert) is that she doesn’t slowly become more mainstream as the film progresses. At the end, there’s still the ear spikes and cargo pants and hair that resists attempts to be smoothly coiffed.

The Barden Bellas are the school’s (and the country’s) #2 a cappella group, second only to the super-confident all-male Treble Makers. While the Trebs get more and more creative with their act, the Bellas stick with tradition, trotting around on dangerously high heels while sweetly chirping Ace of Base. If you thought “I Saw the Sign” was tired without the Bellas’ help, wait until you hear it four hundred times during this film. You’ll be right there with commentators Gail (Elizabeth Banks, The Hunger Games) and John (John Michael Higgins)3 as they groan disparaging remarks and the judges as they yawn and check their phones.

Audiences much prefer the loose and unpredictable Treble Makers. The Bellas, tired of being second best, recruit some new voices, including a reluctant Beca.

Meanwhile, Beca makes a tentative friend in Jesse (Skylar Astin), a non-douche-bag Treble Maker. Neither Beca nor Jesse care much about the Treble/Bella rivalry, so their relationship doesn’t slide down the overworn slopes of the Romeo and Juliet trail. But as Beca starts to become more and more engaged in this club she’s joined, she starts to grumble about how the Bellas need to let down their French twists. Everyone else is on board, but senior Aubrey (Anna Camp) has a hard time letting go of tradition.

So yeah, it’s no groundbreaking framework, but the details are out of this world. Almost all of the lines are good, with the majority bordering on truly great. Kendrick is believable as an eye-rolling, irreverent teen, and she brings a lot of laughs, but as you might expect, it’s the other ladies in the group who carry the funny, particularly Rebel Wilson’s “Fat Amy.” Wilson was last seen in Bridesmaids itself, as Kristin Wiig’s slightly deranged roommate, but in this film, she’s given room to blossom into the hefty, weird-as-shit character that gregariously introduces herself as Fat Amy, “so that you twiggy bitches don’t call me that behind my back.” Hana Mae Lee is her foil as the impossibly quiet and possibly psychotic Lilly, and Anna Camp is that earnest kind of prissy that you can’t help liking, despite her friction with our badass heroine.

The others are fun in their ensemble-rounding-out roles, but not mindblowing. Cynthia Rose (Ester Dean) is the lesbian and Stacie (Alexis Knapp) is the sexpot. Both overact in the stereotypes they’ve been dealt, and both have the potential for more. Dean’s one-dimensional obsession with boobs hints at lesbophobia and Knapp’s sexy non sequiturs seem like screenwriting afterthoughts. The rest of the film’s snappy directing and sharp writing was so tight that these two blah characters stood out that much more.

In the end, everyone learns stuff, namely “try new things,” “stay in school,” and “make friends” (sometimes even “your doom room will be elegant and beautiful,” which is absolutely false).

There are two instances of “Party in the U.S.A.”

There are two giant puddles of vomit.