Bridesmaids: This is happening.

You’re wasting time reading this review. Changes in the world of popular cinema are happening right now! Close that laptop and buy some tickets, I tell you! (You may need to open the uh laptop again to acquiesce to my demands, sorry about that.) 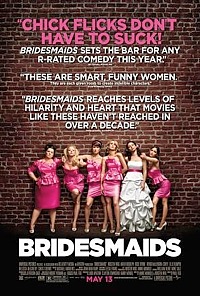 Frankly, Bridesmaids shocked me, but only because it was the best comedy I’ve seen in years. Folks, I simply dare you to watch this film, then re-watch that damn Hangover movie again. THEN come back and talk to me about a well-written, well-directed, and well-acted comedy.

The joint child of Kristen Wiig and fellow writer Annie Mumolo, Bridesmaids breaks ground in the way that Tina Fey’s Mean Girls did way back when. These women aren’t writing scripts carefully designed to follow a story arc proven to make the most money from other women. These aren’t chick flicks. These are whip-smart comedies with characters that are relatable beyond one thin personality trait, who interact with their friends in ways that are flawed sometimes but painfully (and often hilariously) realistic. And best of all, these are women who don’t treat men as bumbling idiots who are only good for one thing (usually fixing stuff), and the movie’s happiness doesn’t depend on the right coupling. Instead, it stems from accepting something that Megan, the best character in the whole film (and brilliantly played by Melissa McCarthy*) says…you are the problem, and you are also the solution.

See, Annie (played by Wiig herself) has a best pal named Lillian (Maya Rudolph). When Lillian gets engaged and Annie’s in the maid-of-honor hotseat, everyone’s strengths and weaknesses are thrust to the forefront. Lillian falls into the nearly impossible to avoid wedding trap: no matter how cool of a bride you are, it’s hard to resist the wedding industry’s pitch that this next six months, two years, however long it takes for you to plan that dang event…this time is all about you. For vulnerable Annie, who’s used to wallowing in what she feels is bad luck, it’s not a great time to take on the wrangling of four very different bridesmaids while her support system of a best friend is distracted by tulle and flowers. Throw Lillian’s newest friend, the affluent, elegant, and charming Helen (Rose Byrne) into the mix, and Annie’s fragile psyche doesn’t have a prayer.

Her insecurity is so crippling that she can’t even recognize true friends in the other women she meets or the men she dates. Everyone thinks they’re better than her, every friendly date is just pitying her, and nobody cares that she’s on a downward spiral. Sounds like a bummer, I know, but I haven’t gotten to the part where I talk about how every single minute of Bridesmaids is packed with seriously funny jokes (of both the witty and fart variety), physical humor (of both the arriving awkwardly on a horse and throwing up on someone else’s head variety), and probably improvised exchanges between Wiig and various other cast members. These bits go on for ages but never get dull, due to the comic talent that’s put Wiig at the forefront of SNL for the last however many years.

It’s hard to see Wiig staying with NBC for much longer, after the success this movie will undoubtedly have. Director Paul Feig, of beloved Freaks and Geeks fame, clearly made a wise decision to linger on Wiig and McCarthy’s very different performances, letting their momentum steer the picture. (When you get to the scene of the plane ride to Vegas, you’ll know exactly what I mean.) It’s their boat, he’s just helping to hoist the sail.

Wiig, Mumolo, and Tina Fey aren’t the only talented female screenwriters out there, of course. It’s a matter of changing the precedent to allow raunchy comedies to be the domain of both genders.

But now that I think about it, my advice to the moviegoer is to ignore everything I’ve just said and instead just allow yourself to enjoy watching a skinny, awkward lady destroy the frilliest bridal shower ever imagined. Because really, whether you want to muse on the pleasant implications or not, all you need to know is that Bridesmaids is, simply, the best comedy since Mean Girls. And I’m thrilled to predict that it won’t hold the title for long.

* You may remember Melissa as the completely adorable Sookie in Gilmore Girls. If so, you are in for…a treat? I think?