One woman has shucked her way to elite status, and this Saturday, she and her sister will be in town to show off their talents. Like many in Water View, which is located on the Rappahannock River, Pratt’s parents worked at one of the several small oyster houses along the Northern Neck coastline in the 1950s. A young Pratt had no interest in shucking until she became desperate for a job. She asked her sister, Clementine, to impart the family trade.

“One night she taught me to shuck oysters on my mother and father’s doorstep,” said Pratt. That was 1975.

Before long Pratt was an employed oyster shucker just like her mother and father. She made $1.25 on her first day. The more Pratt shucked the quicker she got, so quick that her boss encouraged her to show off her skills. “‘Why don’t you go and compete in the competition,'” he told her.

That competition was the Urbanna Oyster Festival,1 and Pratt didn’t compete alone: the sister who taught her how to shuck, Clementine, joined her. The two sisters have each won the Virginia State Oyster Shucking Championship and have also won the National Oyster Shucking Championship. “It took me 10 years to be number one [nationally],” Pratt said. 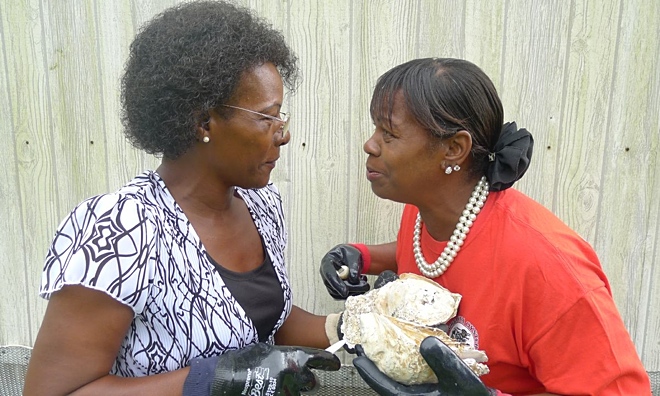 The winner of the national championship gets to compete among the world’s elite shuckers at the annual International Oyster Opening Championship in Ireland. Pratt first competed internationally in 1992. “That was the greatest thing in my life, to represent us over there in England,” she said. “I came seventh in the world.” She placed third in 1993, and finished second in 1994.

In addition to representing her country, Pratt also represented women, as she’s done throughout the 27 years she’s been a shucking competitor. “I have gone places where I am the only woman in the building there to compete,” she said. She boasts that no other woman has placed higher in the international championship.

“That kind of made me a little more popular in the world,” she said. Nearly 30 magazines have featured her, and she travels across the country to appear at various oyster shucking events. “I work with a lot of people that raise oysters. I do a lot of parties, I do a lot of functions that show people how to do oysters.”

Pratt said that while she learned oyster shucking at a young age, many along the Northern Neck no longer do. “Today there are very few young people out here shucking,” she said, even though oysters have had a recent renaissance in North America. “Oysters are coming back,” she said.

Attendees of this year’s Richmond Folk Festival will see Pratt and her sister, Clementine Macon Boyd, compete against one another on Saturday at 5:00 PM at the Virginia Folklife Area. “My sister and I are like the tennis girls [Venus and Serena Williams],” she joked. She said onlookers will be wise to pay strict attention during their competition. “Don’t look at your friends and don’t look down, because we’re going to be finished before you know it,” she said.

Here’s Pratt (with a bow in her hair) competing with Clementine at last year’s folk festival: