The Mysterious Rabbit Puppet Army is not, alas, a shadowy army of bunnies with strings holding them down. Instead, the MRPA is a puppeteer performance collective based in Chapel Hill, North Carolina that is a part of the Chapel Hill Prison Books Collective. The shows tell stories that are social justice parables.

The Mysterious Rabbit Puppet Army is not, alas, a shadowy army of bunnies with strings holding them down. Instead, the MRPA is a puppeteer performance collective based in Chapel Hill, North Carolina that is a part of the Chapel Hill Prison Books Collective. The shows tell stories that are social justice parables. I went over to the Wingnut House (home of some of Richmond’s anarchists) to see one of their shows.

First up: Hansel and Gretel

This old story is given a new look with the puppets (Gretel is a raccoon, Hansel a fox, their mother a purple unicorn, and so on and so forth). Times are tough in this economy for the little puppet family, and cutting corners is necessary, but when their evil green-faced monster father suggests cutting the kids out of the budget their mother is distraught. But times are hard, and if the kids have to be abandoned, then so be it. (“How would you kids like to go see a movie….Pirates of the Caribbean…..4…..in Raleigh.” brings chuckles at the Pirates reference, groans at the 4 reference because really, we needed 4?, and more chuckles at the intonation of Raleigh.) So, little Hansel and Gretel are dropped off, but Hansel, being wily like the fox he is, tags streets as they go so they can find their way home again much to the delight of their magical mom. But this time, when they get left at the Durham theater, they are truly abandoned. Nobody offers them help until Mr. Turbine–who ends up locking up poor Gretel in a cage. 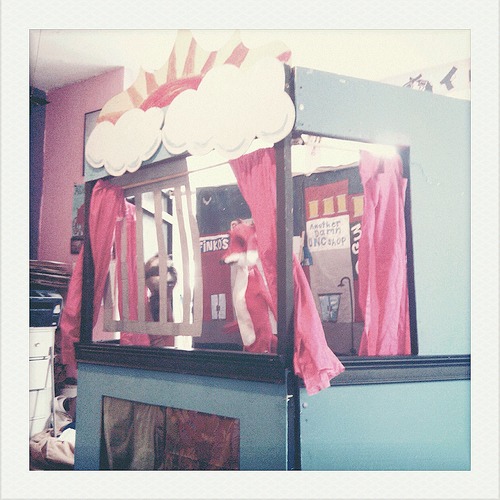 Finally, after much pleading, Mr. Turbine agrees that this is not entirely democratic, so he prepares a ballot. Should Gretel get more space in her cage? More water? More food? Hansel and Gretel protest this, as she doesn’t want more freedom in her confinement, she wants to be free, period! But…well, that’s just not on the ballot! The show ends in a climactic fight and justice is served (and maaaaybe there’s a little deus ex Machina), complete with pyrotechnics.

All in all, it’s a short little play about perceived problems with the current democratic system. While billed as kid-friendly, I would note that this depends on your political and social views as a parent, and your thoughts about the use of words like “hell” and “damn” (“damn” is written on a back-drop piece featuring a storefront labeled as “Another damn UNC shop” — a reference to the North Carolina roots of this troupe).

The second act features a shadow puppet show about the history of the Prison Industrial Complex. Originally, one puppeteer joked, they were going to title it something like ‘Unicorns and Rainbows’ but that felt a little misleading. The sketch is lead by Mr. Reus (say it…say it again maybe, aloud this time…there you go–wordplay in names is always a bonus in my book), a top-hatted rabbit. The show includes historical information about the ways our prisons have morphed and changed in America (Quaker influences, unpaid prison labor, and an owl who throughout the story flaps onto the screen to distribute Prison Facts). We learn that, surprise surprise, “capitalists win” (with “womp womp” sounds provided by the audience). The main goal of the show is to show audience members the racism they claim is apparent in the prison industrial complex system, both now and throughout history.

This show includes very spiffy shadow puppets–the effect is that of an old-timey cartoon. These are not your best friend’s finger-shadow-puppets from camp! The history of the prison industrial complex may not be at the top of your list for an educational evening out with your child, but if that’s your jam, then this particular segment may be right up your alley. The show might benefit a little from fewer songs, or perhaps simply more audience participation in the songs, but overall the message comes across and as mentioned before, the shadow puppets themselves are nicely done. The troupe is on tour at the moment. Their next stops include Philadelphia, Morgantown, Asheville, and more, but they may very well arrive in Richmond once more someday in the future.

Bonus: they do birthday parties, y’all.