Meet me at the murals: R Robot Jams at the Canal Club

One day Kuszyk decided he was going to be the “robot guy,” and as part of April’s RVA Street Art Fest he colored a dingy Canal Club wall with a new chapter of robot culture. In his new book, Jammer Slammer, artist and author R. Nicholas Kuszyk, also known as R Robot, splits the robot population into jammers and slammers. He explains in the book, with his trademark simplicity, that jammers jam and slammers slam. However, like his art, the simplicity seems a front. His book explores the depth of what happens when we are separated from one another. Richmond’s Shockoe Design District now shares in the drama.

As part of April’s RVA Street Art Fest (RVASAF), Kuszyk colored a dingy Canal Club wall with a new chapter of robot culture. The Canal Club–a long-time host to jam bands, slam bands, and everything in between–sits at Cary and 17th, a few blocks east from the other RVASAF murals. Although he tells me he missed painting alongside the other artists who lit up the power plant during the festival, Kuszyk was thrilled to beautify a previously somber and gray spot.

“I was super stoked to do the Canal Club. Having a big mural right down there in the Bottom is awesome.”

Despite their seclusion in Shockoe Bottom, one of Kuszyk’s sceney robots did sneak over to the elite club at the power plant and hopped aboard one of Heide Trepanier’s Seussical creatures.

The robots left behind found a perfect home in the Bottom. With exterior enamel and rustic rim spray paint, Kuszyk splashed an explosion of color down by the Kanawha Canal. The mural’s bright shades and stark composition contrast with the gritty labyrinth of roads, parking lots, rusted train tracks, and bridges nearby. The prismatic painting adds blue, green, pink, orange, purple, yellow, and red to the drab buildings below the I-95 bridge. It also adds a lot of fun: Kuszyk’s characters never lack in charisma. Their cartoon appeal imparts a powerful dose of levity to that area of RVA. 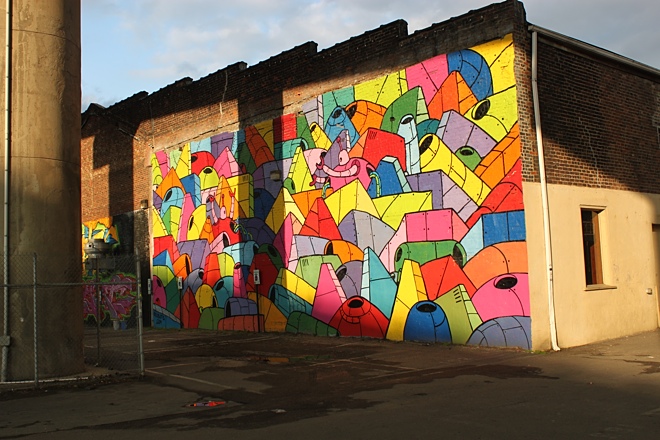 However, Kuszyk’s robots at the same time call on us to consider human themes as heavy as a load of steel and screws. In The Canal Club Mural, as Kuszyk calls it, two robots stand within spitting distance but find each other unreachable. On a closer look the robots seem to extend their tiny arms towards one another in earnest. The robot on the right appears anchored in place by robot wires as the other’s wiry heart spills into the junkyard. They are surrounded and separated by a cacophony of robot carnage louder than the rumbling tracks overhead. In the afternoon sun, I happened upon one of the highway’s support pillars, too, casting a symbolically dark and divisive shadow between the red and pink pair. Is it all “a metaphor for humanity?” Kuszyk slyly suggests to me, almost in jest.

Kuszyk’s comic art unexpectedly explores a trove of tendencies in humans. Their parallel universe often intersects with ours, and although the colorful robots are undeniably charming, Kuszyk rarely employs his crew for pure entertainment. Nick is short on the details of their expression but a lot seems to lie underneath their armor, both at the Canal Club and their other haunts.

The metaphors at the Canal Club may be as many as the colors on the wall. Whatever Kuszyk intended, there is opportunity, here and in Jammer Slammer, to explore what the robot interactions say about human interactions. Like the robots, humans want relationships. We want community. But in this digital age are our relationships bound but broken by wires and machines? Do our connected lives on Facebook and Twitter fail to connect us? Are communities anchored in old ways that separate us? The Canal Club Mural may not command this depth on its surface, but the power of art is lost if you fail to press past the cheery spectrum of colors on your own. An introspective inspection of The Canal Club Mural may evoke thoughts about relationships with your community, partner, friend, family member, or neighbor. Are you separated from someone by a bunch of garbage? 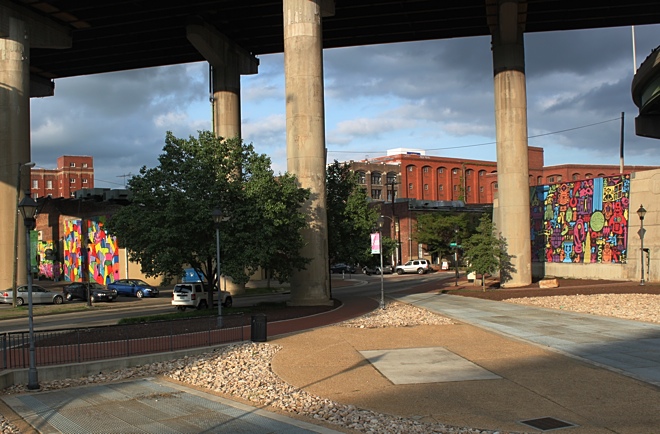 Kuzsyk is reticent about his artistic purpose but our conversations rev at the mention of RVA. Although he no longer lives in Richmond, a recurring chord for the artist in his answers is “Richmond is rad.” Those three words seem to be the response to about every question I ask him. Kuszyk describes his one-time home town as a “super cool small city with an awesome creative energy that I respect and admire.”

The Canal Club Mural is a perfect launching pad for more exploration and absorption of this creative energy, as the art doesn’t end with the grand gallery at the power plant. Right across from the Canal Club hangs Ryan McGinness’s contribution to RVASAF: a stunning banner that captures his baroque iconograph style. McGinness graces the foyer of the VMFA and elicits labels from “art star” by the New York Times to “God” by Metropolis Magazine.

One block away you can also see several of the numerous G40 murals, all of which were completed around the same time as RVASAF. Works in that block alone include murals by ROA, 2501, Lelo, and Pixel Pancho. Virginians Kuszyk and McGinness thus top an incredible concentration of international all-stars within easy walking distance. All of this art is a dynamic addition to Richmond’s design district. Take the time to appreciate this large-format outdoor art and your artistic inspiration will come alive and your RVA pride soar as you soon see there are murals, murals everywhere.

Kuszyk has been doing the robot for almost ten years. Despite his education, skill, and range in all manner of artistic pursuits, one day Kuszyk decided he was going to be the robot guy. You may hear locals refer to him as just that–“the robot guy.” He is one of our finer, and more famous, home grown artists. He lived in Richmond on and off for eight years as well as bouncing around Mclean, Charlottesville, and Harrisonburg. Nick graduated from VCU with majors in both Sculpture Extended Media and Painting and Printmaking. He painted the stairwell of VCU’s School of Mass Communications. He handed out robot drawings at underground Fan hangout, Ipanema.

The robots no longer only operate in basement bars. These machines have risen to extreme heights. Kuszyk recently completed a mural for the infamous fountain at Bonnaroo, where his robot troops jammed and slammed among overheated music lovers. It was a high profile commission for the artist and a new experience for his metallic horde, who don’t typically play in water.

Kuszyk’s robots are, however, quite accustomed to the spotlight. Jammer Slammer is their second appearance in print, following the popular children’s book R Robot Saves Lunch. These robots rub shoulders with socialites in exclusive galleries in the United States and abroad. The colorful characters peddle colorful bagels in Brooklyn and occupy several high profile walls there. They jammed at the 2011 Governor’s Ball music festival on Governor’s Island in New York and made cameo appearances in both a TV on the Radio and a Rye Rye (featuring MIA) music video. Look carefully and you will note that Nick sprayed his name on the wall just behind MIA’s solo bits–inviting graffiti writers on set can be risky. Sometimes irreverent, often profound, and always enchanting, the robots definitely get around.

And Richmond is proud to have a prodigious pair to call our own. Kuszyk’s Canal Club robots are sure to see more and more people visiting the Bottom, enjoying the close company of a friend, viewing the area’s art explosion, and jamming and slamming in joy. 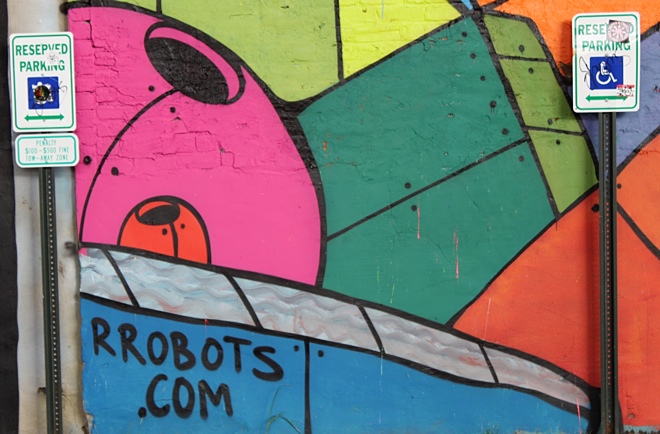 To learn more about the artist, check out his website. For more rich robot commentary on our culture, pick up Jammer Slammer at Need Supply Co., Chop Suey Books, Desert Island, Needles and Pens, Spoonbill and Sugartown, or online here.