Meet me at the murals: Chair apparent

The temporary outdoor sculpture is the most fleeting of art installations, so the first art up at the power plant, site of the recent RVA Street Art Fest, will be the first down: Tom Brickman’s Social Experiment. The temporary outdoor sculpture is the most fleeting of art installations, so the first art up at the power plant, site of the recent RVA Street Art Fest, will be the first down.

“I have to go check on it every few days. When it starts to deteriorate, I will take it down.”

If you have any interest in RVA fine food and design, you most likely have seen and soaked in Tom Brickman’s slick handiwork–he could even be your favorite interior designer and furniture maker. How’s this partial list of projects: Balliceaux, Comfort, Kuba Kuba, Lulu’s, Parkside Cafe, Pasture, Secco, World of Mirth?

A 1987 graduate of VCU’s sculpture program, Brickman once designed sets for TheatreVirginia and constructed exhibits for the Science Museum of Virginia. He eventually whittled down his loves to repurposed artistic furniture, playing music, and inserting a unique and attractive aesthetic into the community. He often employs repurposed, reimagined materials in his work, calling on the components’ history for enhanced patina, purpose, and power.

His latest project also calls on the community to consider its place in space. Sitting at the entrance of the power plant gallery on the Canal Walk and assembled during RVA Street Art Fest is a towering sculpture made of approximately 20 wooden classroom chairs, bound together into the shape of, well, a chair. 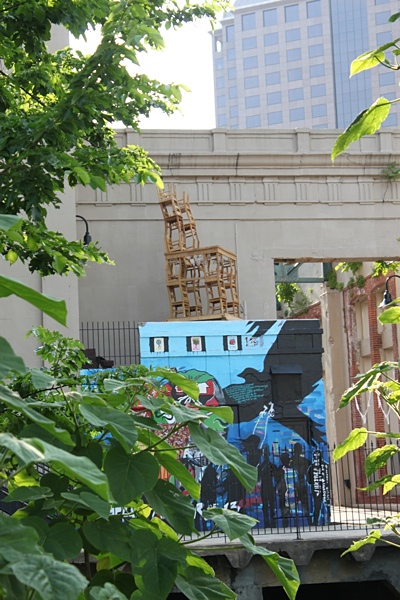 Social Experiment asks passersby to contemplate the idea of the many melding to form a commonality. The sculpture is about systems: government, religion, education, social activism. When we, or others, work together is something bigger and better achieved? Are those systems of influence in our community culling our resources in a way that aggrandizes the whole? Do we take that sitting down?

Turns out the sophomoric humor in a chair of chairs fails to scratch the surface. However, you won’t hear Brickman sit on high and insist on an interpretation or message in this melange of wood, braces, dowels, and screws.

“The reason to make something is to make people think.”

He does point out that chairs fit together to form a chair is not the only irony. Several sightlines near the sculpture, and especially the view from its perch atop the power plant, stare suspiciously at a skyscape of power towers–many with the names of banks and investment firms emblazoned across their highest point.

Brickman tells us the sculpture ascended the wall, above an eventual Art 180 mural, prior to the festival in order to isolate “elements of danger I didn’t want to involve the public in…Yeah, we were a little outside of our comfort zone.”

Brickman sectioned the sculpture into pieces before asking (not enough of) his friends to help him hurtle those structures from a ladder to the rooftop. There he assembled the final elements of the giant experiment. 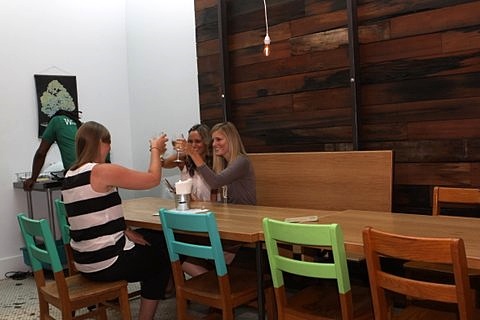 If you’ve been to Pasture, you recognize the chairs. The fact that the materials, which originated in a classroom, travelled to a community meeting place before settling into a crow’s nest overseeing contemporary artwork adds to the richness of the sculpture they compose. Whether about education or some other system, elements that have a history raise his art’s voice.

Adding to the intrigue are the enigmatic white surgical gloves hanging from the piece. I was down at the power plant with muralist Ham a couple weeks ago and we were both enjoying Social Experiment. Earlier, Ham had asked Brickman during fabrication what was up with the gloves. Brickman reportedly shouted down, “You’ll see.”

Neither of us were sure we did. Or were supposed to. Brickman does ask that you realize the water filling the gloves will soon evaporate, causing the gloves to shrivel up. He also admitted that the gloves provide scale. “And ridiculousness.”

As sculptor Susann Whittier’s sophisticated shirt collars on the power plant’s windows begin to transform into the look of a prom gone wrong, Social Experiment too will not last long. However, it’s provocative message will long massage the minds of those fortunate enough to take it in.

Tomorrow, June 2nd, Tom will again share the stage with artists at the top of their game. Top chefs from around the country will create performances on a plate during OFF Broad Appétit at Pasture and keep an eager audience on the edge of Brickman’s chairs.