Man of Steel: Steely like an emotionless, boring piece of steel

Ever since the first Iron Man movie, I’ve been stoked on The Marvel Cinematic Universe. I mean, it just seems like an obvious way to make a billion dollars while placating the hordes of ravenous comic book fans, doesn’t it? And it doesn’t only seem like that would be true, it is totally true as Marvel has made a literal billion of dollars on their Marvel Cinematic Universe films. While, in the meantime, DC has…made some Batman movies?1

Finally, DC decided to create, or at least leave open the possibility of, a shared universe for their stable of heroes. This, you gotta hope to heck, will ultimately lead to a Justice League film. I’ve got no beef with The Avengers or any of their related intellectual properties–I love those guys (and gal(s))! But with the Justice League, the highs are so much higher:2 Superman, Batman, Wonder Woman, Flash, Green Lantern, even Aquaman.3 It’s like all my hopes and dreams are being realized, and it all begins with this pretty boring Superman movie. 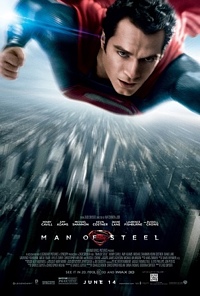 As with all Superman reboots, this one starts off with Jor-El (Russell Crowe) and Lara hanging back on ol’ Krypton before things explode into a fine dust. At some point long, long ago the Kryptonians gave up on natural child birth in favor of genetically predetermined tubebabies. Through some hastily explained science, we learn that tubebabies inevitably lead to the “destabilization” of your planet’s “core” which will soon lead to a new astroid belt around Krypton’s red sun.

It’s the impending world-ending explosion that’s got the government of Krypton up in arms. Well, if General Zod (Michael Shannon) had his way they’d be up in arms–he is genetically predetermined to be an intense war dude4 after all. Jor-El, scientist born and bred, disagrees and thinks Krypton’s problems can be solved with more science, which is weird because isn’t that what got them in this apocalyptic pickle in the first place? Tempers flare, Russell Crowe rides a dragon, and baby El is shot into space, destined for earth–but not before Zod is shot into the Phantom Zone while swearing revenge on the House of El. Said baby, Kal-El (Henry Cavill), who you may know as Clark Kent, grows up a strapping and angsty lad in Kansas destined to beef with General Zod one day probably.

Henry Cavill is a beautiful man. I’m not saying he’s as charming as wonderful Tom Welling, because who is? But he’s a passable replacement and does have a wonderful smile. Not that you’d know, as Cavill spends most of the film either:

This isn’t dudeman’s fault either, there’s just not a lot of script for him to work with. In most of his scenes he just silently reacts (broodily) to what someone else says or flashes his great smile and blasts off to save someone from being crushed to death. You get the impression that, as his moniker states, he is truly made of cold, lifeless steel. The problem with Superman is that he’s so godlike in his power set that he’s unrelatable and kind of boring–which this film tackles by making his character…unrelatable and kind of boring? It’s such a contrast to Shannon, Crowe, and Kevin Costner (who plays Pa Kent), who all turn in really great performances.5

This is the world we live in: superheroes, and the universes they inhabit, are dark, tortured, and maybe a little flat. It’s post-9/11, y’all: how can a hero be bothered to fly through space with their poetry-reciting girlfriend when the baddies are destroying entire cities? It shows in the action sequences too. Remember when Independence Day blew up the White House and we were all AWWWW HELL NAW! Now, you’ve got to blow up three or four White Houses to even get noticed. It’s also a prerequisite of this particular decade to include a very-NYC scene of civilians running from clouds of dust as high-rises collapse.

That kind of stuff–action sequences that recall 9/11–are what Director Zack Snyder (Watchmen), who’s supervised by Christopher Nolan, does best in Man of Steel. These scenes are blurry, fast, and epically scaled–which is just what you’d expect when a dude like Superman starts a fight in the middle of downtown Metropolis. Honestly, they’re almost too fast to follow, but only in a way that makes the film feel more…super!

Listen, not every storied comic book publisher can launch a series of cohesive superhero films with a home run like Iron Man. So while Man of Steel is decidedly not so super, I’m still looking forward to the inevitable(ly awesome!) Justice League movie.6

Why you should see this film

You’ve got an ‘S’ tattooed on your chest, and your entire wardrobe is red and blue.

You just ordered the 10-disc limited edition collectors set of the Marvel Cinematic Universe: Phase One — Avengers Assembled (only $149.49 on Amazon). Also, is Lois Lane even in this movie? It’s hard to tell.