Living without a cure: Lisa Sims on surviving breast cancer

Nearly 10 years ago, Lisa Sims found out that her mother’s cancer had returned. Several months later, Lisa found that that she herself had breast cancer. Lisa talks about her remarkable journey, the invaluable help of Massey Cancer Center, and losing her mother. Lisa Sims sits on a cheap antique reproduction couch, the kind with a curved, sculpted back. Florescent lights glow above her and below her feet is a burgundy-colored carpet. She’s in her radiologist’s office.

When the radiologist enters the room, Lisa sees crumbs dusting his upper lip. It is, after all, lunch time. A short while ago, Lisa was with peers during a team-building exercise on Belle Isle. “I’ll see you guys after lunch,” she said before leaving.

Lisa Sims is the deputy director at Venture Richmond, the organization in charge of the Richmond Folk Festival, RVA Fireworks on the James, 2nd Street Festival, and many other events. She moved to Richmond in 1998 and, until 2006, served as the vice president of marketing at Richmond Metro Convention and Visitors Bureau. In June 2002, Lisa married. One month later, she found out that her mother, Ruby Wilkins, had cancer.

It wasn’t the first time. Nearly eighteen years earlier Ruby was diagnosed and treated for breast cancer. After doctors told Ruby that her cancer had metastasized, this time as breast cancer in her bones, her life expectancy instantly plummeted to 6-24 months. “There’s not a whole lot you can do once a cancer returns,” says Lisa, reflecting on that devastating news. Except endure.

Ruby began painful radiation treatments to subdue the cancer and prolong her life. Soon it would be Lisa’s turn.

Lisa had undergone regular mammograms for years, in part because of her mother’s history with breast cancer. In October 2002, at the age of 42 and just a few months after Ruby’s diagnosis, doctors noticed something in Lisa’s left breast. She was asked to undergo a needle biopsy. Lisa didn’t worry. “I was thinking it was probably nothing.” She had good reason.

In 2000, a biopsy had shown a non-malignant growth in one of her breasts. She says that the phrase needle biopsy is “misleading,” as the circumference of the needle is closer in size to that of a drinking straw. 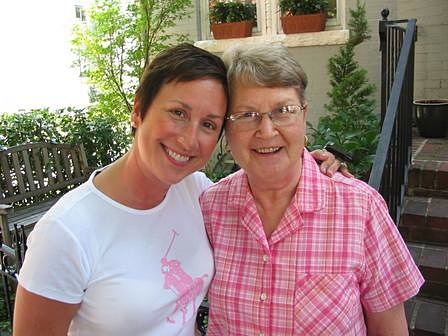 Lisa Sims and her mother, Ruby Wilkins in 2004

After the biopsy, doctors told her that she would need to return for the results. While Lisa says this is not an uncommon request, “I think they probably knew then because they insisted that I had to return to hear my results in person.” At the time, however, Lisa still didn’t worry.

October 2, 2002 began as a typical day for Lisa. She joined her Leadership Metro Richmond classmates for team-building exercises on Belle Isle. Thinking that the results of her biopsy were going to come back negative, she left her co-workers on their lunch break. “I’ll see you guys after lunch.”

Sitting on the curved-back couch with burgundy at her feet, Lisa Sims found out, just as her mother found out nearly twenty years ago, she had breast cancer. “You really can’t believe it. It’s like the world shrinks a little bit.” Even though she gave herself regular breast examinations, she had never felt anything unusual (it’s not uncommon for women to miss a growth, as Lisa would later find out). The growth was about the size of a golf ball.

After the news settled, she was left with an unexpected type of uncertainty. Where do I go? “That’s the thing that’s the most striking about a cancer diagnosis,” says Lisa. There is never a clear path. “While many cancers have common denominators, there are thousands of variations that you can’t anticipate,” and there are a “million different options” in terms of treating cancer. Lisa says “women are often so confused” by the surplus of options and opinions and varying schools of thought. It’s overwhelming to say the least.

And not only did Lisa have to contend with cancer in her left breast, but soon doctors would find more. There were cancerous cells in her right breast too.

Her first thoughts about the cancer were clear: “I want this out and I want it out quick.” That thought was soon tempered with a conflicting feeling most women have: “a need to preserve as much of the breast as possible.” Lisa’s first doctor told her that the cancer in her left breast was small enough, and caught early enough, that she could have a lumpectomy–a procedure that removes the tumor while still conserving a portion of the breast.

However, many people told her: “You’ve got to go to Massey,” referring to the VCU Massey Cancer Center. She said that men and women frequently hesitate before seeking out a second medical opinion often for the simple reason that they don’t want to hurt their doctor’s feelings. 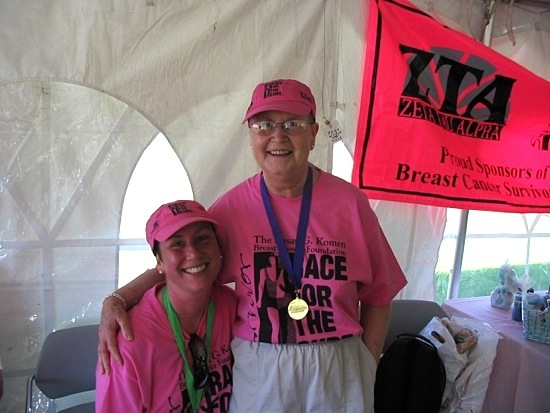 But knowing that second opinions are encouraged by both former cancer patients and reputable doctors, Lisa visited Massey. She was amazed by her first visit. “All day, every day they are looking at breast cancer.” As a clinical research-focused institution, Massey is often on the cutting-edge of cancer-related treatments. “Trained eyes can see lots of things that others can’t,” says Lisa. That trip to Massey would save her life. It was Dr. Harry Bear1 who found another tumor in Lisa’s right breast. “I didn’t want to have to come back,” says Lisa. “I wanted it taken care of then, so I said, ‘Just do it all now.’” She chose a bilateral mastectomy which meant she would lose both of her breasts.

Her mastectomies took place on November 13, 2002. The surgery took nearly nine hours. Two weeks later, doctors informed her that they had detected cancer in three of her lymph nodes–that meant cancerous cells were cycling through her system. Removing her breasts would not be enough, “That’s when chemo comes in.”

In December of 2002, Lisa met with Massey oncologist, Dr. Tom Smith (now at Johns Hopkins). She remembers sitting in an exam room with him to discuss treatment options. Next to Lisa was her mother, Ruby, who was, herself, in the middle of cancer treatment.

“When I had to call my mother in October and tell her I had cancer, it was horrific.”

Dr. Smith told Lisa that the chance of her cancer returning within five years was fifty-fifty. “When you’re treating cancer, it’s like playing against the clock…We’re going to buy you better odds,” said Dr. Smith. Lisa’s first chemotherapy regimen consisted of a single intravenous session every three weeks. It was intended to last a total of eight sessions.

But shortly after beginning the treatment, Lisa saw a 2002 ABC News segment on the annual San Antonio Breast Cancer Symposium. It was there that doctors reported success with a more aggressive form of cancer treatment.

One of the many undesired effects of chemotherapy is that it kills off a patient’s white blood cells, and doctors typically allow several weeks between chemo sessions to let the patient’s body to recover. Although a relatively new way to treat patients, doctors and clinicians at the San Antonio symposium reported that a quicker, more intense, biweekly regimen had proven more successful than a protracted one. Lisa emailed Dr. Smith and asked to try it. “I’ll give it a shot if you will,” was his reply. He didn’t mince words when describing the toll chemotherapy takes on patients.

“We’re going to poison you within an inch of your life.”

Within three weeks all of Lisa’s hair was gone. Her eyebrows. Even her eyelashes. Everything. “I was hairless. Like an onion. I didn’t want to look at a mirror at all,” says Lisa. She also recalls a fatigue unlike anything she had ever experienced. “All you want to do is be horizontal,” she says.

Although she occasionally wore a wig to cover up her baldness (“Other people are really uncomfortable when you’re bald”), Lisa preferred not to. Along with the chemotherapy and the physical effects it wrought upon her, she had the result of the mastectomy procedures to contend with. “People are trying to not look at your chest…You spend a lot of time reassuring people you’re okay. Convincing people that you’re not going to die.” She wasn’t done yet. After the chemotherapy came the radiation treatment in April 2003.

Every day for five days, lasting a total of six weeks, Lisa would drive to Massey where she would lie on a table and have large dose of radiation shot into her chest. “It takes you longer to park than it takes to do the procedure.”

All through this, however, Lisa existed in a remote, distant state. “I was slightly detached from everything. Part of that is self-preservation, part of it is chemo-brain.” Little irritations, like being caught in traffic, simply melted away when faced with the stark reality of life and death.

On November 13 of this year, Lisa anticipates celebrating ten years since she sat on that awkward couch in her radiologist’s office. “There is no cure for cancer,” says Lisa. “You are only in remission—and happy to be there—hoping each day that it doesn’t come back.” It has not come back for Lisa. Unfortunately, it did for Ruby.

Ruby died on April 20, 2005 at Lisa’s Fan District home. She lived nearly a full year beyond what doctors had expected of her. There is sorrow in each fighting for one’s life, but there is a poignant kinship in being able to share it with someone else.

“Her being so sick and knowing that her time was limited gave me the strength to put my cancer in perspective,” says Lisa about her mother. “My cancer seemed such a tiny drop in the bucket compared to what she was dealing with. At the same time I think that, as a mother, watching what I was going through almost took her mind off of her own situation. We held each other up, literally. Things happen for a reason. I like to say that I got more from cancer than it got from me, and it’s the truth.” 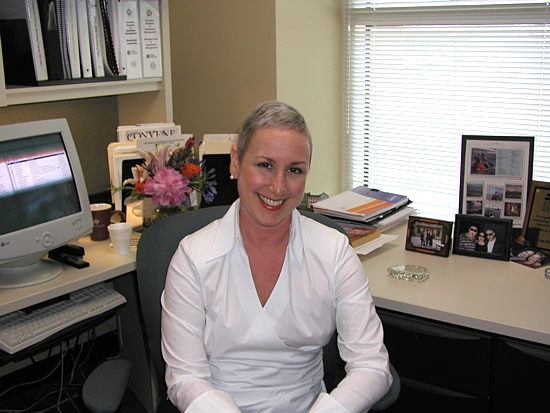 While Lisa approaches the monumental celebration of ten years surviving, she says that survivors are never the same. “It does change your life and who you are and your very existence.” While cancer has certainly changed Lisa Sims, it has not defined her. Her smile is as vibrant as anyone’s. The lethargy of chemotherapy has yielded to a razor-sharp mind and wit. She has learned to appreciate things that others may take for granted. She still lives in a world of life-and-death, but it’s a world not much different than what everyone else must contend with.