A local tattoo artist is a guiding hand for mastectomy patients to help get the breasts back that they lost. Combining both her medical interests and her artistic talents, Amy Black is hoping to foster a new movement that replenishes femininity taken away by both cancer and surgery.

Depending on the policies at your place of employ, a picture we used in this article may be considered Not Safe For Work. We think it is amazing/mind-blowing, but ultimately, it is a picture of nipples. –Ed.

When Amy Black propositioned a tattoo artist in Columbus, Ohio for an apprenticeship the tattoo artist refused. There was a simple reason: Amy was a woman.

The tattoo artist didn’t want to have women in his shop for the better part of a business day. Although one would like to think that such androcentrism is buried deep in the past (both tattooing’s and otherwise), Amy says that her time in Columbus in the mid-1990’s showed her that tattooing was a “boy’s club–still is.” “There are definitely less women tattooing.” She estimates that 80% of all tattoo artists are men. But she is not cynical about male tattoo artists having it out for their female counterparts. When I chat with her in her shop, Trademark Tattoo, at 3125 W. Cary Street, she’s very hospitable, very friendly, despite her regular sniffling that comes from having either a summer cold or allergies. Her necklaces and earrings and the aviator sunglasses resting in her fine, jet black hair would easily maker her seem a bit intimidating. But she’s not. Not in the least.

Being that Richmond is the third most tattooed city in the country, it’s not surprising that I would be in tattoo studio in the heart of Carytown, talking with a tattoo artist about tattoos. But she and I are not talking about just any tattoos, we’re talking about a specific type of tattooing for a specific type of person. It’s rather poetic, I think, when Amy tells me about the one tattoo artist in Ohio who objected to her apprenticeship solely on the grounds of her gender. The reason I say it’s poetic, is that Amy now tattoos very unique tattoos on a unique clientele:

Nipple and areola re-pigmentation on women who’ve had mastectomies.

A child of adoption, raised in the Midwest, Amy once considered attending school to become a medical illustrator. Both the expense and duration of completing the proper schooling ultimately dissuaded her. She attended the Columbus College of Art & Design where she did particularly well with anatomy renderings and figure drawings. She also collected her first tattoo. She became frustrated with being in the center of the country, while the vibrant coasts–which seemed to be on the forefront of new artistic aesthetics–flourished on either side of her. “You always feel like you’re getting art second-hand,” she says of living in the Midwest. “I never wanted to kill myself to pay rent,” she tells me with, I imagine, a slightly bassier voice than usual because of the congestion in her nose. This quickly eliminated cities like New York and Washington, D.C. One city, however, was growing a reputation for having quality tattoo artists, and a cost of living below surrounding cities. Richmond.

Two well-regarded artists had a significant influence on her artistic career. In 1997, Timothy Hoyer and Chris O’Donnell started Alive Gallery. Envisioned as a smaller tattoo space geared to more customized work with closer one-on-one interaction with clients, Alive fostered more intimate, creative relationships with people. It was here that Amy worked after arriving in Richmond. O’Donnell later moved to New York City, leaving Hoyer and her as Alive’s principal owners. In 2005 Hoyer moved and left the shop in Amy’s hands.

I notice that she has tattoos of a distinctly Japanese style. I ask her how she became so enamored with the Japanese tattoo aesthetic. As it turns out, she remembers the moment. It was when she came across a photobook that featured Japanese women with intricate and sometimes large tattoos across their sinuous bodies. “I thought it was beautiful and powerful.”

Hoyer and O’Donnell moved away, and Amy took over Alive, rebranding it Trademark Tattoo.

One day she happened upon the portfolio of tattoo artist Vinnie Myers, who in 2003 began applying his skills to recreating, rather creating the two components of the female breast that were destroyed by mastectomy procedures: the nipple and surrounding areola. “He definitely inspired me,” says Amy. The complex levels of coloration required by a strong and meticulous skillset, combined with her existing interest in medical illustration, hooked Amy. She wanted to try her hand at it. The only problem: how does one publicize an interest for specialized tattooing to those who may not be interested in tattooing, at least in the traditional sense–those who have had a bit of both their femininity and identity taken away because of breast cancer?

Once tumors and surrounding breast tissue are removed, a process by which also removes the breast’s nipple, plastic surgeons put in a saline breast implant to re-create the shape of the missing breast tissue. Doctors will sometimes rely on skin and tissue from another area of the body (such as the abdomen) to provide the necessary tissue of the re-created breast. This process, however, makes the breast, well…bare , as no nipple or areola are present. This a disconcerting fact that millions of women have experienced throughout the world. Something that Susan is all too familiar with.

Susan, 53, who married just last Saturday, was diagnosed with cancer in her left breast in 2006. She had a mastectomy, and uses a chilling adjective to describe to me the aftereffects of the procedure on women’s bodies: “butchered.” Although her mastectomy procedure met her doctors’ expectations, the resulting reconstructive surgery did not, and she experienced several complications. All told, she had five surgeries in two years. Speaking over the phone from her Outer Banks home, Susan described her left breast once her surgical procedures were completed. “It was blank,” she says. “There was nothing there.”

As part of her treatment at Richmond Plastic Surgeons, she was entitled to a pigmentation procedure that would convey the appearance of the lacking features. There was, however, a problem. They didn’t look as realistic as Susan would have liked. What Susan saw in the before-and-after pictures of previous clients was a blank breast turned into one that had a “little pink circle.” She told Richmond Plastic Surgeons, “I want something that looks real.” They couldn’t, in Susan’s opinion–what they could provide was “more of a reminder of what was missing.” She had rather have kept her left breast bare than cover it with what she saw as being an inadequate remedy. She sought someone else. 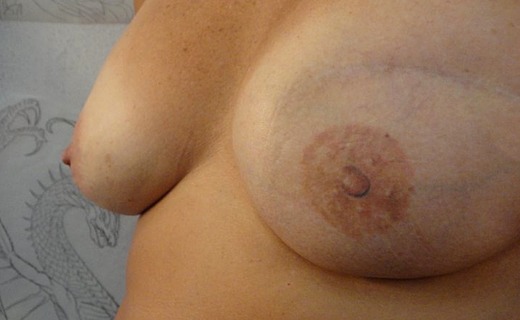 An example of Amy Black’s work on a client

Eventually she found a tattoo artist in Maryland named Vinnie Myers, the same Vinnie Myers whose tattoo work Amy Black had been looking at recently. Although amazed at Myers’s talent, Susan had two reservations about setting up an appointment with him: the distance between Richmond and Maryland, and the fact that Vinnie Myers was a man. While the latter point was by no means a deal breaker, Susan preferred that the artist be a woman, someone who could better understand, someone with whom Susan could be “more comfortable.” She began calling tattoo shops around the city asking for someone who could do work similar to that of what she saw online. She couldn’t find anyone who was suitable. Undeterred, she came across a phone number to a shop named Trademark Tattoo. She placed a call.

Amy Black picked up the phone.

The two met in the winter of 2010, likely at the same consultation desk where Amy and I chat in her studio where an older model iMac sits along with various papers related to both art and her business. To Susan’s left would have been a folded massage table outstretched, just as there is when I talk with Amy. Curtains aesthetically warm the midday sunlight, creating a space that seems more geared toward meditative reading than tattooing. But this is how Amy wants it. Whether working with someone on a traditional Japanese style tattoo or with someone like Susan, Amy’s studio differs from the conceptions that come to people’s mind when they think of a tattoo artist.

Susan told Amy about her displeasure with the plastic surgery center’s re-pigmentation abilities, and in turn Amy told Susan about how she thought she could do better. Susan had found her woman at last.

“She started slowly,” says Susan about how Amy proceeded. Unlike women who have had both breasts removed, and thereby are able to create nipple hues of virtually any color without continuity restraints, Susan’s right breast remained unchanged, and any work on her reconstructed, left breast would require colors that matched her right breast. Amy began with lighter shades, allowed weeks for the pigment to settle and heal, and then would gradually darken the new nipple until it best matched the existing one. Susan says it took about three sessions for Amy to complete the process.

“It looks absolutely real,” says Susan. Despite having had the procedure done for over six months, she speaks with an infectious enthusiasm that causes me, hundreds of miles away, to smile along with her. Amy is gratified by the reaction she saw of Wheeler when she looked at herself after the last session. “I saw all this stress,” says Amy “…just finally fall off of [Susan].”

“It made me feel whole again,” says the 53 year-old cancer survivor. “Made me feel normal in a way that I haven’t in five years. It’s incredible.”

Doctors at Richmond Plastic Surgeons were so impressed by Amy’s work, that they have hired her to work out of their facility once a month with their own patients, partnership that Amy says has been “fabulous.” Amy’s second visit will be later this month (similarly, Vinnie Myers now provides reconstructive tattooing for the Plastic and Reconstructive Surgery Department of Johns Hopkins Hospital).

In addition to working with the local plastic surgeons group, Amy also provides the service at her shop. Amy, who, in 2011, was named the best tattoo artist by Style Weekly readers, is working on an official website, as well as merchandise that she plans to sell to create a fund that will assist women in paying for the service when insurance will not cover it. To help, Susan will make jewelry, with proceeds going to either the Susan G. Komen foundation or the forthcoming fund that Amy creates). “It’s more about these ladies than it is about me,” says the tattoo artist.

Both Amy and Susan hope that more people become aware of the nipple re-pigmentation process, a service that they both think is too little discussed. While showing reverence for the tattoo artists that came before her, Amy thinks that a successful re-pigmentation was not possible many years ago, because of yet-advanced artistic skill levels and the lack of large palette of pigment colors from which artists could choose. That and the notable absence of women tattoo artists to provide breast cancer survivors with an understanding that only a female relationship could imbue.