Les Miserables at the Landmark

The 25th Anniversary production of Les Miserables, the beloved musical adaptation of Victor Hugo’s tale of rebellion and redemption, has made its way to our fair city. Should you attend? What’s French for “duh”? The 25th Anniversary production of Les Miserables, the beloved musical adaptation of Victor Hugo’s tale of rebellion and redemption, has made its way to our fair city. Should you attend? What’s French for “duh”?

Les Mis lovers, and there are millions for a reason, will find a lot that’s different about this production. The international 25th anniversary tour of Boublil & Schönberg’s masterpiece gets rid of many beloved aspects, including the famous turntable stage, but don’t worry. New producer Cameron Mackintosh hasn’t killed the dream you dreamed,*1 he’s just given you something new to put in your heart full of love.* Elaborate sets stretch several stories high in true barricade fashion, and gorgeous painted backdrops are projected in ways that keep things from feeling static. The orchestrations have changed as well, preferring more percussive arrangements to the very 1980s keyboards that vied with strings in the show’s former incarnation. 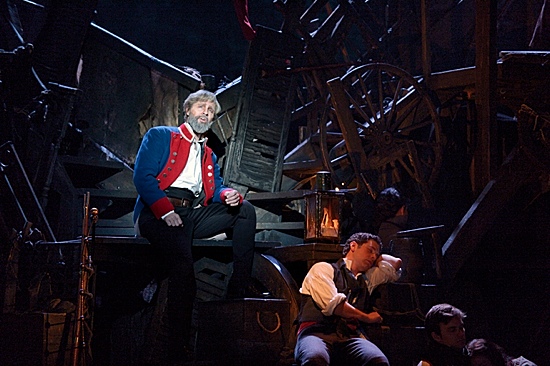 But n00bs won’t even realize that the old style is something they should be missing. When it comes down to it, the parts that make this show so wonderful are the libretto (done in English by Herbert Kretzmer), the score (Schönberg), killer vocal talent, and the genius interplay of tragedy, hope, anguish, love, idealism, black despair,* and lots of muskets. And those things have not been relegated to the dark of ages past.* They’re still there, and they are in-your-face good.

The n00bs I talked to either had their interest piqued by the decent 2012 film version of the show or were simply carried to the Landmark like a corpse over someone’s back, hanging there like a bloody great sack.* Yet, they liked it. They really liked it. In fact, they reported “crying,” “being amazed,” and “sputtering with disbelief during [SPOILER]’s suicide.”

They did, however, have some criticisms. The Landmark’s sound system, which was pretending once again to be so awfully good,* couldn’t do justice to the magnificent voices. “It sounded tinny,” said one friend. “But then, it sort of always does?”

Another had heard that this issue would be fixed during the old building’s upcoming renovations. “The music overcame the voices,” said this friendly n00b. “But the set design and production were amazing, as was the lighting.” He also praised the talent of Briana Carlson-Goodman, who became the best of his life* after playing a riveting, golden-voiced Eponine.

Bottom line, Les Mis rules. You should get tickets instantly.

For so it must be. And so it is written on the doorway to Paradise.2