Ah, the old “Who do I cast who can sing as well as they act?” dilemma. It sometimes results in Russell Crowe, who can indeed do both equally badly. Les Misérables is the musical for people who don’t like musicals. Escaped convicts, grisly suicides, bloody revolutions, duels, drunkards, hookers—it’s no Rodgers and Hammerstein feel-good romp. The legendary operetta explores Victor Hugo’s serious themes of repentance, obsession, and futility. On the stage, it’s a dark show with a revolving floor that emphasizes jailbird Jean Valjean’s ongoing flight from his pursuer, Javert, as well as time’s tendency to double back on itself. 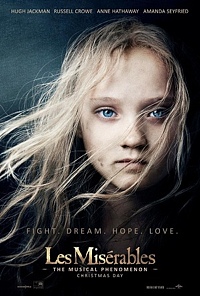 The potential for screen greatness is high. Adaptations of the book have been done multiple times, but an attempt to capture the entire (completely sung) musical’s intensity is an ambitious one. Oscar-winning director of The King’s Speech, Tom Hooper has painstakingly crafted a cinematic version of Les Mis that recreates the grim tone of a poverty-stricken 19th century France. In using a camera to do what the stage can’t, Hooper focuses on the internal struggles of Valjean, single mom-turned-prostitute Fantine, unlucky in love Eponine, and the righteous Javert. We’re all up in their faces all the time, witnessing a whole lot of anguish happen in close-up. Hugh Jackman (Valjean) and Anne Hathaway (Fantine) take the cake in this respect. The seasoned actors don’t flinch from taking their characters to the limit, and their fears, sorrows, and joys make the movie.

The kicker is that Les Mis is also the musical for people who do like musicals.Claude-Michael Schönberg’s nuanced score and Alain Boublil’s libretto give talented singers an opportunity to really become their characters. Valjean: rich with hope but strained with paranoia. Fantine: desperate and betrayed. Eponine: wistful yet realistic and determined. What the show’s stars over the years have done with their voices, the film’s actors do with their faces. They have to. They can’t really sing.

Don’t get me wrong. Jackman, Hathaway, and a few others are totally passable vocalists. They could out-sing me with one vocal chord tied behind their backs. In a show like Oklahoma! or Rent, they could belt their songs out with pride (and in some cases, have already done so). But this production relies so heavily on acrobatic voices that it’s dangerous to stack the decks with actors who make great facial expressions first and sing second.

This brings me to the film’s tragic and unforgivable flaw: Russell Crowe. I can only assume that Crowe is an enormous musical fan and pulled out whatever stops rich celebrities pull in order to get himself cast as Javert. It’s the only explanation. Even if Crowe could sing a note, he certainly can’t infuse any of those notes with feeling. Javert is probably the most intense character in the story—spitting out his contempt with every lyric until Valjean’s inner radness finally causes some cracks of doubt to rupture his self-confidence. Crowe comes across as a guy who is way out of his comfort zone and is distracted by his attempts to remember everything his vocal coach has told him. Superior acting ability might, in the end, redeem him, but it’s in short supply. Unfortunately, some of the film’s most powerful scenes are diluted by Crowe’s weaknesses, and as a whole, Les Misérables suffers.

Bang-up job on this gorgeous, multi-layered film, Hooper, but the show still wins hands down.

You enjoy the play. Vocal quality aside, it’s compelling, artful, and faithful to the original (despite some unnecessary explanatory additions to the libretto, running along the lines of, “I am threatened by this man/Because he loves my daughter/And I do, too/Oh no, what if he replaces me in her heart/Now I’m singing this outside as I ponder it a little longer/I’m Jean Valjean by the way”).

Also, Sacha Baron Cohen and Helena Bonham Carter as the crooked Thénardiers are a delight.

Well, how do you like that! I can’t think of a reason, unless you’re planning to see the show sometime in your life (fingers crossed for a revival). Even if that’s the case, you should maybe see the movie anyway. A less than perfect production of Les Misérables is better then no production at all. Do you hear the people sing? Damn right you do.