Jobs: Is this real life? The story of Steve Jobs is a super interesting tale of failure and redemption. The failure was near-complete and the redemption is flawed, but doesn’t that make the story better?

There was Jobs sitting alone in the empty building at Apple in 1985, with all his projects and authority stripped away because he didn’t deserve them, brooding. The next year, Jobs bought the computer graphics group that was to become Pixar away from George Lucas. Jobs then founded NeXT, ran out of money, then convinced Ross Perot to bail out the company which produced the workstation on which Tim Berners-Lee invented the World Wide Web, which I promise is a real fact and not early 90s mad libs. Upon returning to Apple in 1997, Jobs partnered with former enemy and competitor Microsoft to release Office for Macintosh, providing Apple with the crucial infusion of capital that saved it from bankruptcy at its weakest moment. Jobs considered tablet computing to be a worthless gimmick until not long before the iPad came out. This is the story of a guy who screws up but keeps trying. 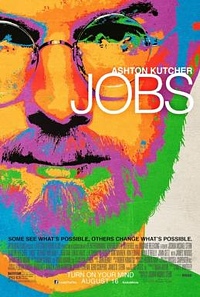 I get that you have to check boxes if you make a biopic. A Jobs biopic has to include Jobs founding Apple in a garage (and this one films in the real-life garage in question, which is unquestionably cool), being a huge jerk, and getting fired. Where Jobs goes wrong is taking an hour and a half just to get to 1985. It’s like a Batman movie that takes 90 minutes to shoot Bruce Wayne’s parents.

Plus, instead of shooting them, they just kind of get a cold. The Jobs in Jobs is an enormous jerk, but apparently the real Jobs was a world-class innovator of new ways to be a jerk. I am going to say positive things about real-life Steve Jobs soon, but it is important to start by acknowledging that he was by all accounts perhaps more talented at being cruel and terrible to others than at building consumer technology companies. The movie did get correct that he parked in the handicapped spaces at Apple, and he never stopped doing that. He preferred not to use a license plate on his car, either.

But he was also able to get people to be better than they thought possible. The highs were higher and the lows were lower, at least according to Apple co-founder Steve Wozniak. But why make the movie less interesting or exciting than reality? Why would the movie whitewash the drama by spending so much time in a damn boardroom? Why show Jobs shouldering aside champagne on the day of the IPO, when it would have been so much cooler to show Jobs serving cake and champagne at the original Macintosh signing party?

Ashton Kutcher does a remarkable impression of how Steve Jobs looks when he introduces a product in a keynote, but for some reason he applies these same speech patterns every single time he talks. Steve Jobs didn’t talk like that all the time (and how cool was that speech? Too cool to be in the movie, apparently).

The writers appeared to portray Jobs as a genius beset on all sides by idiots he constantly has to correct. Steve Jobs himself says you would be foolish to run a company that way, and one of Steve Wozniak’s primary criticisms of the movie is that it disrespects the extremely smart people who chose to work with Steve Jobs, even at great financial risk, even when they knew his schtick. If you want to spend some time watching Steve Jobs interact with a team, go watch the entire NeXT video I linked above. Not only does it spend less time than Jobs on carrot gardening footage (which, I guess they got that detail right), but it also shows Steve Jobs interacting with his team in a way that does a lot more to show why so many Macintosh people would be willing to leave Apple to follow this jerk to his new company. I’d work for real-life NeXT Steve Jobs. I would have preferred not to have spent an entire movie with Ashton Jobs.

I also get that you have to take creative license to make a biopic: changing characters, simplifying things, shaving inconvenient facts. But why change silly details, like making movie-Jobs hate the Beatles when he famously loved them? Why turn real-life awesome genius Steve Wozniak into an inarticulate and teary-eyed Big Bang Theory-style nerdweakling who just wanted to be cool all along? Ashton Jobs discovers iconic Apple designer Jony Ive in Jobs because Ive wants to make computers blue. Real life Ive did want to make computers blue, but the reason he is Senior VP of Design at Apple right now is that he shared real-life Steve Jobs’s beliefs about what design means, and it ain’t the color of the box. Jobs talked about it to the New York Times in 2003:

Most people make the mistake of thinking design is what it looks like. People think it’s this veneer–that the designers are handed this box and told, ‘Make it look good!’ That’s not what we think design is. It’s not just what it looks like and feels like. Design is how it works.

If you think Steve Jobs is an idiot whose particular brand of salesmanship did nothing more but hoodwink the foolish for the last thirty years, you weren’t going to see the movie anyway. If you just want to see what made this crazy jerk idiot some kind of insane business leader, watch these videos of the actual Steve Jobs instead. I promise, they’ll be more exciting and certainly more accurate, reality distortion field notwithstanding.

You owned a Newton.

You just spent the last two hours watching videos of the real Steve Jobs on the internet–so you’re probably good.

Steve has a hapless girlfriend, a wife, a daughter, a silent board member, and a secretary. Between them, they speak about ten lines total. No surprise in a movie about a famously male-centric industry.

Justin Morgan knows that there is no problem an Excel spreadsheet, a sweet tea, and a pass to the tight end won’t solve.