GWAR, Me, and the On-rushing Grip of Death: Part 57

The West Coast tour continues, as well as the tales from the filming of the second season of Holliston! 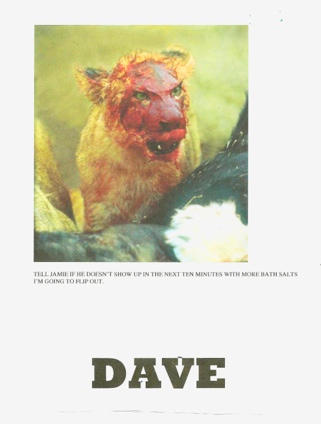 Here’s the little thingy the production crew of Holliston made for me so I would know what room to smoke meth in. Slavis made me a brand new costume so I wouldn’t stink up the set too bad. There were far too many examples in this season’s scripts comparing my odor to that of “a bag of dicks” or a “sack of scrotes.” But then I realized I had nothing to disguise the odor of burning meth. So I just shit myself and rubbed poo all over the walls. Problem solved!

Whew, just as our last chapter told the story of our 1989 LA escapades, so does this intro tell the story of my latest adventures in that sickening sprawl of urban mayhem that is the City of Angels. The fact that I am typing this right now is evidence enough that I escaped with my life, but I am not gonna lie…acting is HARD!

Because that’s what I was doing! That’s right, I was recently back on the set of Holliston, shooting season two of the FEARnet horror sitcom, feeling like I was about to die. First of all the fact that I was in Hollywood, shooting a sitcom, much less doing it for a second season, freaked me out so hard that I felt like I was going to explode any second. Being on set was like a weird mix of euphoria and a panic attack. I mean, this studio, which used to go by the name “Desilu” if that rings any bells, is where they have shot everything from I Love Lucy to one of the Underworld movies. It’s a sprawling complex where they often have several productions going at once. Parked in the lot is one of the armored vehicles from District Nine, and over there is the bathroom where Kate Beckinsdales perfect ass took a big, greasy shit.

In short, it’s the real deal, and you don’t want to go in there and fuck-up, which, considering the amount of lines I had, and the lack of effort I had put into learning them, was a real possibility. But I am happy to say that everything went well, except for the almost-dying-part. At one point, racked with exhaustion, I collapsed off a scaffolding, falling directly onto a power main which exploded with enough force to hurl me across the parking lot into a row of always-occupied porta-potties. I guess I fell asleep or something, though I can’t understand why I was so tired. Something to do with wearing a 60-lb monster suit underneath blazing hot studio lights for un-ending hours, sometimes having to hold extremely awkward positions through multiple takes, perhaps? At one point they wrapped a rope around my chest and held me in a postion where I could stick my head into a tent and deliver my lines. It was sweaty work, even with the beautiful California-girl production assistant hand-toweling me down between takes.

After I had finished the ten episodes and one Christmas special (“wrapped”as they say in the business), I enjoyed a little job-well-done back-slapping, indulged in some booger-hiding, and then tried to enjoy the obligatory cast and crew circle jerk. Returning to my swanky hotel, I proceeded to curl up in the fecal position (sitting on the toilet yet somehow having your head on the floor) for a solid 36 hours as my body replenished itself (thank god for room service—if I could have had them chew it for me and spit it into my mouth, I would have done so and paid considerably extra if neccesary—this is part of the “Mama Bird” culinary school). I think I had sweat out every last molecule of anything inside of you that you need to enable your body to do anything other than lay in a heap.

It was my birthday, I was in LA, I had just finished a major project, tons of old buddies were blowing me up, but all I wanted to do was sit on the couch, drink beer, and watch every movie that Showtime HD had to offer. So I finally caught up with The Kings Speech, The Big Empty, Eternal Sunshine of the Spotless Mind (or whatever they call it, I forgot), and finally that movie where Jennifer Garner and a bunch of random nimrods are somehow flying their “earth-ship” to the center of the planet to nuke the earth’s core–of course some kid saves the day by “hacking the net.” How the hell did she go from Boys Don’t Cry to that schlock-fest? Ahhh…the magic of Hollywood.

Fitting, as in our last episode we were just leaving LA as part of our continuing coverage of GWAR’s second coast-to-coast tour–so lets get back to: 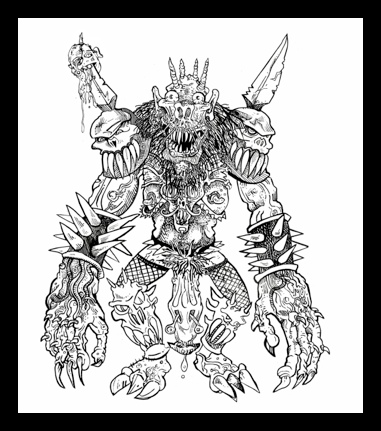 Here’s a little design I did of you-know-who for GWAR’s upcoming “Fate or Chaos” North American tour. The art will be printed w/ green, glow-in-the-dark ink on a long-sleeved black shirt, with the arms going down the sleeves. Now everybody can get at least a crude idea of what it is to be Oderus, and as you lope about your house, frightening (or perhaps exciting) your beloved pets, you might get an idea of what it’s like to bear the responsibility of being such a tremendous asshole.

We escaped LA and headed for the Bay Area. It was our second time in San Francisco and the buzz had grown ever since we had left our mark on several venues–that meant there was blood all over the walls wherever we played. We were mostly in graffiti-covered shitholes anyway, and a good douching was what these places needed, of that there was no doubt. So douche we did. In addition to spraying the stage, ceiling, floors, and walls with our food-coloring and water blood, we would also leave cryptic GWAR-scrawl all over the place—cartoons of the characters or various “mojos”1 were always left in our wake, and we returned to many of these clubs to add to these stains. Places where 50 people had shown up the first time through were filled up this time through.

Omigod! Some celebrity fact-checking has revealed that Rox was still in the band at that time. All that lead-in work I did in the last episode was for nothing. I just can’t seem to get Rox out of the band. Yes, the chronology of this piece is a little disjointed at times. I would be nowhere without Gore-man’s time-line of all the known GWAR shows. Gore-man has been laboring intensely on “The Dim Time” video and his research and recording has saved much history. One day he’ll get out the ultimate GWAR coffee-table book and it will be awesome. But back to the story!

We roared into the Bay Area with slammed shows at clubs like Berkley Square (with Operation Ivy, who were great), Covered Wagon (Jiz’s place) and finally the I-Beam. I remember having to walk all the way across town to get to the bus and seeing a few people standing on the corner ahead of me. One of them was that dude from Redd Kross. When they saw my GWAR t-shirt (free shirts are better) they all started talking excitedly about how cool GWAR was. That was a really cool feeling. These guys had no idea I was in the band, and I didn’t tell them.

There were lots of stories that night as we broke apart into various groups and spread out across LA. I believe this was the night I first came into contact with the raging horror that was Billy-Boy.

We had first come into contact with the man through a series of letters he sent us which included copies of a intriguingly bizarre fanzine he published…made all the more intriguing by the sheets of blotter acid he would include in the letters. When we finally met I was a little shocked. I had been expecting an average dude, not a 6-foot-4, 250-pound beast with a mane of sun-bleached hair and the perpetual grin of an eternal stoner. Billy Boy won us all over immediately with his combo of reverence towards GWAR, ample supply of good drugs, and pleasant nature. He was the living embodiment of the California maniac: full of life, pumped to the gills on any possible variety of powerful drugs, blonde, tan, and huge. It was useful having such a beast on our side. He immediately became part of the tribe, and after the show at the I-Beam led us down to the beach beneath the Golden Gate Bridge where we drank a mini-keg of some kind of amazing barley-wine and got intensely hammered.

This was the beginning of a long friendship, but unfortunately, Billy-Boy slipped off the radar after getting arrested in the wake of the LA Riots. He had been providing security for a neighbor’s damaged property and got involved in some kind of violent altercation that led to him getting arrested. I was completely bummed and totally surprised. Billy Boy had never, not once, displayed any tendency towards violence. But I have a feeling I will hear from him again. For the next ten years or so, any time we were in LA or SF Billy Boy was also there, always with very naughty things. A complete master of debauchery, he was several years my younger. He always had tons of cash that I guess he made selling drugs. We were impressed!

One of the good things about Billy Boy was that he always came alone. Many a potential friendship has been snuffed out by the ruthless application of a crowd of obnoxious buddies!

Shit…looks like I made my intro too long again. That’s OK, I will have more meat in the next one. Looks like “Death Tour” is gonna need a few more episodes. See ya in two weeks.