GWAR, Me, and the On-rushing Grip of Death: Part 56

The adventure continues with a 1989 trip to Texas and then California. Along the way, we’ll learn the origin of “Socky.”

Finally, the bus was all packed up and ready to depart the Slave Pit. It was then that GW let out a scream of rage that cleared the bus. Someone had scrawled “mercy fuck the GWAR slave” on the ceiling of her bunk, right at eye level. One look at Flailo Slave’s smirking face told me who the culprit was, but I was too busy laughing to be mad or appreciate how it might have made GW feel. I was, as usual and of course, completely heedless of others’ feelings. Slave One rolled his eyes and Muscle lit a cigarette, settling back and enjoying watching the situation develop on the sidewalk. After much cajoling, crying, and hysterical laughter we were all aboard.

After that unfortunate incident, the “Lead Sled” was out the door and down the road, barreling at a whopping 45 miles-per-hour to Houston, Texas, where we opened the show with two performances at the Axiom. It was a decent-sized club and we couldn’t believe that we packed it two nights in a row. There were posters, flyers, gawking fans…they even paid us well at the end of the night. I couldn’t believe it! If one thing in particular stood out it was the opening band “Squat Thrust.” They played inside a giant plastic bubble in an already sweltering club and its inside was soon dripping with condensation. Finally, they ripped open the plastic and were “birthed” onto the stage. It was pretty awesome!

But what was even more awesome was the amount of gorgeous punk rock babes that came out. I don’t know if you have ever noticed, but Texas girls are hot. That combo of Daisy-Dukes, cowboy boots, and punk rock chic made me want to stick my dick inside anything that drawled. In fact it was on this trip that I met Nay-Nay and Frog-Neck, two tough and gorgeous Texas babes that I would be life-long friends with (especially my NAY-NAY!). The aliases are far from appropriate though (“Nay-Nay” was far more likely to say “Yes-yes”, and she did, quickly succumbing to Spewy’s “back-rub” technique). And Frog-Neck, who I often lost track of over the years, did not have the neck of a frog, she merely had a tattoo of a frog on her neck, and soon after had a puddle of warm jiz on said tattoo.

Then it was up the road to Austin where we played our first show at the Liberty Lunch. Here the timeline introduced earlier gets all fucked up again. I am pretty sure this is the tour where we ran into Gibby and the Butthole Surfers, went out to their ranch in Driftwood, and ran amuck for a couple days. But we couldn’t dally long…we had big time West Coast shows and two days to get there. We blazed a trail across the country and unbelievably made it to Long Beach without any major bus malfunction. I was so happy to be back in California with my good buddy Tommy-Gun, and as we pulled up alongside the Pacific Ocean in Venice Beach, I was the first one at the bus door waiting to get out. The lever was pulled, the door opened, and I leapt out, directly into the path of a speeding bike messenger, who flattened me and flew head-over-heels into a bush. Both of us were miraculously unhurt, if slightly groggy, and we wobbled off in opposite directions.

We were playing at the legendary Fenders Ballroom in Long Beach which was quite a step-up for a bunch of Richmond chucklebutts,1 who had played sparsely-attended club shows the first time through the L.A. area. We couldn’t believe it as we watched the line form outside. Besides the Shafer Court shows, which were always huge no matter who was playing, this show was by far the biggest yet. They crammed like 1000 people in there and soon realized they were going to need a barricade. A bunch of tipped-over tables fulfilled that purpose (poorly), and were completely wrecked in the first song. At that point I noticed that the heat was rising dramatically. There was no AC, it was a sunny spring day, and I am pretty sure it was the hottest show we have ever done. There are few things more horrible in life than having to pretend you are an invincible god from outer space when you feel like you are about to die of heat stroke. Most of the characters could slink off stage and catch their breath (I remember many times looking over and seeing Sleazy sitting backstage reading a newspaper), but the band members were trapped in their buckets2 and had to tough it out. 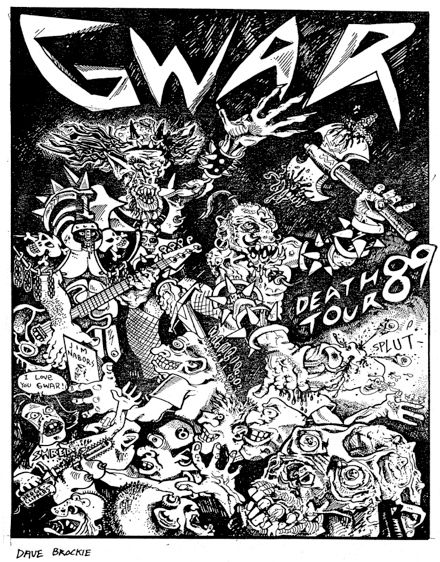 So cool! Someone finally sent me a copy of the official “Death Tour 89” poster, the original of which was destroyed in a flood. Notice how there is no room left for other bands, the club we are playing at, or any other info regarding the gig. We still had a lot to learn. Also notice the dude handing Oderus a Jim Nabors record. This was based on a true incident.

The sheer hell of that show can scarcely be described. We are talking Long Beach (which was LA to us East Coast folk), 1989, Fender’s Ballroom, barely any security, GWAR in all our youthful glory (with GW looking her best), 100+ stage temperature, and the wildest crowd you can imagine, most of whom had never seen GWAR. We could hear them roaring our name from backstage as we drank beer and tried to not freak out. Jiz and a good part of our SF friends had come down, including the lovely Forehead-girl, much to the disdain of Finch. She was way too cool to be a bitch to me, but she wasn’t going to let me fuck her if I was fucking someone else in the same state. Nevertheless we were surrounded by our new friends, exhorting us on, and we went out there and dove into the set with mad aplomb.

The crowd went absolutely nuts. As soon as the blood hit them they just exploded. And there was such a mix of people that there was no tradition established…the crowd was equal parts punks and skins and weirdos in general, so there was no ritualized mosh-pit, just an avalanche of bodies that wrecked our pathetic barrier in seconds. It was all we could do to control the stage, and without the spewing stumps and dicks, I doubt we could have done it. Waves of heat started rolling off the audience but we grimly held on, hitting our cues and staying the course until we brought the show to it’s final climax. It was fucking awesome.

Backstage, we toweled off and looked at each other with sheepish grins. Then we toweled off the sheep. It was going to be a good night. We had just conquered LA, and the promoter rep, Wartney, told us that they had an actual apartment we could stay in. BillyBoy was there with a whole bunch of LSD, which he began dolling out. After loading up the Battle Barge (and me fucking Forehead Girl in the back of her truck), we adjourned back to the apartment. It was then that we discovered the reason it was vacant was because the occupant had just died. She had sat in there for a few days as the cat ate her eyes, so there was an undeniable smell. Things got worse from there. We had so little booze that we strained old drinks through a sock, and gave it to people we didn’t like. Thus the GWAR tradition of “Socky” was born.3 Right around then we got a report that GW had been spotted walking around the parking lot, completely naked. We ran down and swooped her up into a piss-stained comforter. Finally Wartney showed up again, this time not so happy.

He faced the room of drunken, tripping, dirty people and said, with all politeness, “So far today we have had fun. You have seen the good Wartney. But now, it’s stopped being fun. People want to go home and go to sleep, and you are causing trouble outside. So shut the fuck up, stay in this room and everything will be fine. If you don’t do that, you will be meeting BAD Wartney, and you don’t want to meet him. OK?”

It was a convincing speech.

In two weeks–I will be done shooting Holliston, and back with another episode of this rambling tome–looks like the “Death Tour” is going to take at least 8 parts!