GWAR, Me, and the On-rushing Grip of Death: Part 37

Hi! Dave Brockie here! Did ya miss me? I missed you! But there will be plenty of time to catch up later…right now, we have to get to EPISODE 37. 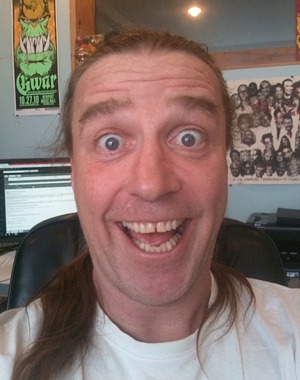 Hi! Dave Brockie here! Did ya miss me? I missed you! But there will be plenty of time to catch up later…right now, we have to get to…

GWAR, Me, and the On-rushing Grip of Death: Episode 37

Finally, the New Chapter is Done!”

Thats right, I finally got it together. After a few weeks off, I am back, and I have written by far the best, longest episode yet. Man, this one is great. You are really gonna love it! What? You thought I had abandoned you? Ceased caring about my bi-weekly deadline and deserted my fans and my story, right when people when people were starting to get shitty with each other?

Never, dear reader, never! Never would I toy with you in such a manner, thinking you exist merely satisfy my narcissistic and deeply self-obsessed sense of humor (though that is a large part of it). Did you think I would take you this far, to have GWAR standing on the edge of the beginning of our soon-to-be semi-success, just to snatch it away from you? Much like the way VCU has snatched barstool bragging rights from the likes of the entire nation until the end of time. In fact I even got on ESPN.com and babbled about it…check it out.

I would never do something like that. This is an amazing story you people have supported for time eternal (what, the column has been going on for what, 20-30 years now?) We saw men die on the moon, hell, we saw women. We saw the birth, and death…and birth again, and again and again and a whole bunch of other shit…of the inter-web-net. Almost as epic as the story about the The Blood Vomits! What? You never heard about the Blood Vomits? Well, you have truly been missing out. Catch up with these medieval morons here.

O.k., all caught up? Good. because I only have a couple more things to do before we get into this episode. Like this. And this!!!

GWAR, Me, and the On-rushing Grip of Death: Episode 37

In two weeks, that is! APRIL FOOLS!