(The New) Evil Dead: The most stupidest film you will ever experience

The newest installment of the Evil Dead franchise will turn your stomach with an unfortunate combination of bore and gore. Evil Dead is the unfortunate remake of both The Evil Dead (1981) and Evil Dead II (1987). Honestly, remake is probably too strong of a description for this, let’s go with “a blatant use of beloved intellectual property to make a pile of cash,” or maybe just “a stinky crapbag.” Like the previous incarnations, this one’s got some teens, they’re in a cabin, the surrounding wood vaguely menaces, but the similarities end there. Gone is the camp and clever camera work, and missing is anyone who can act a candle to Bruce Campbell. 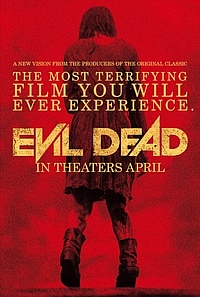 The teens, who are all unbelievably bland and boring, head out to a familial cabin in the woods to detox one of the group who’s a drug addict. There are a couple of girls? And maybe some guys? I think two of them may be related–they’re all so one-dimensional it’s hard to remember. Eventually, they discover a creepy book bound in human skin and do the responsible thing by reading aloud1 the passage clearly marked “DO NOT READ THIS ALOUD ON PENALTY OF DEMON POSSESSION.”

The drug addict tries to convince the gang that her withdrawal symptoms are really a case of the demons, while a thunderstorm floods the nearby river blocking the only route back to civilization.2 The demons start to get the better of our faithful gang of morons and kill them off in all manner of disgustingly realistic ways.

There are plenty of nods to the original The Evil Dead and the spectacular Evil Dead II, but none of them are interesting and none of them will give you that classic horror-movie rush. All of them will make you want to boringly lose your lunch. I mean, seriously, how many times do I need to watch a limb amputation? Watch The Hand Scene from Evil Dead II again–that’s how you do an amputation scene! It’s funny, it’s scary, and while it’s super bloody, you never see a chainsaw chewing away flesh and tendons.

Evil Dead is the fourth installment of the Evil Dead franchise and the first not directed by Sami Raimi–although it is produced by the team that put together the first three films (Raimi, Campbell, and Tapert). It’s instead directed by Fede Alvarez…whose only directorial credits are this one kind of sweet YouTube about giant robots? It’s written by Alvarez and Rodo Sayagues3…who’s only writing credits are that same giant-robot YouTube? Honestly, it’s surprising that Bruce Campbell, who’s the grooviest dude ever to exist, is involved and stoked on the project.

So maybe it’s the inexperience of the director and writers that makes this film so bland and blowy? Maybe it’s just where we are with horror movies? Either way, I think it’s time for some #realtalk. Listen Horror Movies, you guys used to be great, we used to hang out all the time. But you’ve changed, and I can’t bring you around my friends anymore. Remember when you were clever, scary, and thought provoking? Now you’re just scene after scene of some creepy girl in a dress jerking around while dude in the corner cuts his own arms off and some chick gets stabbed in the eyeball with a pair of scissors. What happened to you, man? You used to be cool! And now you stagger over here after a long night of peeling the skin off of your own face with a piece of glass, and you vomit this steaming pile of crap on my porch!? I do not accept!

So, as we all do in trying times, I turned to Twitter, looking for recent horror movies that would not make me feel like I signed up for a class in internal anatomy at my local community college. And, lo, Twitter provided! Here’s a list of horror movies that were released after The Ring (2002)4 that are worth your time. They’re all unique, interesting, and not like watching a real-life human suffer a real-life death. Enjoy!

There are zero CGI effects in Evil Dead. This is pretty impressive considering the numbers of times you see the inside of a person. So if you’re studying, like, Blood Effects or Quantitative Display of Internal Organs, this is probably a great case study.

All seven seasons of Buffy the Vampire Slayer are streaming on Netflix right now.