Blithe Spirit: the ghost who came to dinner

Swift Creek Mill Theatre presents Blithe Spirit. What happens when your wife meets the ghost of your dead (and beautiful) former wife? Why is it that mean characters never learn? Do they not pay attention to other mean characters in books and plays and everything else? Shouldn’t they know by now that inviting someone over to dinner for the sole purpose of making fun of that person will inevitably lead to things going sour later? Geez, fictitious characters, learn from your mistakes, whydontcha? But alas, two of Blithe Spirit’s main characters, Charles and Ruth, decide to have a dinner party with two friends and an “honored” guest. I probably don’t have to tell you by now that the honored guest is also the guest they plan on mocking ruthlessly afterwards amongst themselves.

Needless to say, things don’t go quite as planned. 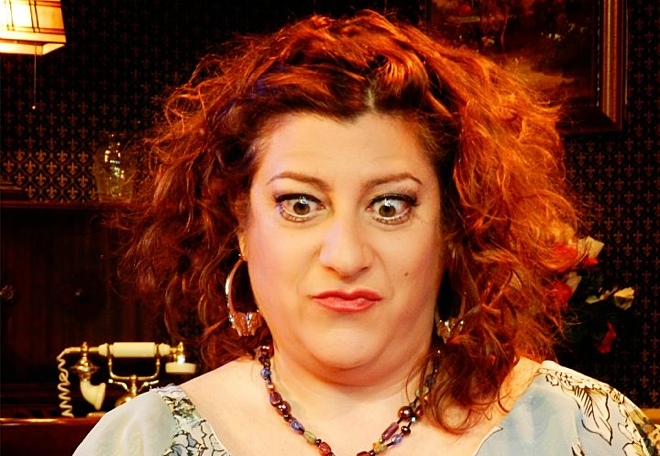 In this “improbable farce” by Noel Coward, Blithe Spirit’s characters quickly discover that the ridiculous gypsy/ghost-whisperer/medium Madame Arcati might actually not be completely crazy–or at any rate, she is, but like Professor Trelawney, there’s something to her magic.

Unfortunately for everyone though, Madame Arcati’s attempts at magic are less than perfect. As she conducts a séance, the group’s jolly mood evaporates quickly when the summoned ghost ends up being Charles’s first wife, the young, saucy and now-quite-white-of-hair-and-face Elvira. Elvira died young, beautiful, and coy–and she knows it. Needless to say, she’s not the most welcomed ghost, particularly by Ruth. Really, Ruth can be forgiven, particularly when Charles is the only one who can actually see Elvira’s ghostly vixen form pouting at him as she drapes herself across the furniture. It’s bad enough to have to deal with someone’s baggage without that baggage flitting and flirting about the room. 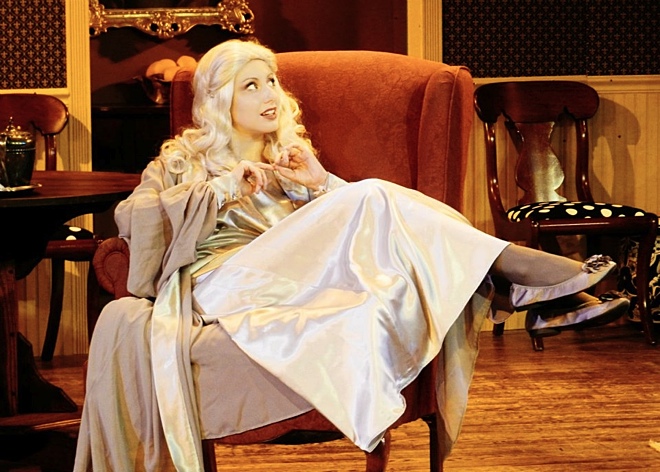 Charles makes a good try at getting the two ladies to be chums, of course. This doesn’t go over too well at first. As Ruth staunchly declares, “I have no wish to have a jolly time with Elvira!” And Elvira isn’t much better, shouting “To hell with Ruth!” What is a fellow to do when he’s got one wife mad at him and the other dead one’s trying to–well, what DOES Elvira want, anyway? Does she just want to stay in the house, or does she have other plans?

That I won’t tell you–I can’t give everything away, right? Suffice it to say, Blithe Spirit is full of the stuff of life. That is, drama, death, some good chuckles along the way.

Blithe Spirit’s cast is small and delightful–each player brings a certain charm to each character, even when they’re behaving badly (especially so for Elvira). Directed by Tom Width, the play’s numerous who’s-on-first scenes are genuinely funny each time, and Ruth and Elvira (played by Vicki McLeod and Rebecca Anne Muhleman) are each at times likable and at times absolutely horrid (in the best way). Charles (Richard Koch) is both charming and thoroughly vexed, and Mrs. Arcati (Amy Berlin) and her many scarves and fluttering flighty ways is laughable, even though it’s still mean to throw dinner parties for the sole purpose of making fun of the guests.