Bernie: Not a Weekend at Bernie’s prequel

Even the nicest guys have their breaking point. Many, many years ago I saw Richard Linklater’s Slacker and declared it the worst movie I’d ever seen. Slacker documents a day in the life of Austin, Texas through a heterogeneous collection of scenes knit together only by characters that pass in through one shot and out through the next. It has no “plot” or “protagonist”–things I, the teenage film critic, thought pretty important. Slacker, of course, is not the worst movie ever made and is now considered a cult, if not regular-people, classic. Only now, after seeing Linklater’s newest film, Bernie, do I get what he was trying to do with Slacker. Sorry it took me 20 years, guy!

Bernhardt “Bernie” Tiede is an actual guy from Carthage, an actual town in east Texas, who killed Marjorie Nugent, an actual 81-year-old woman–you can read all about it on Wikipedia. Richard Linklater’s Bernie is a mockumentary that tells Tiede’s (Jack Black, Tropic Thunder) tale through a series of vignettes intercut with interviews with some of Carthage’s colorful residents.1 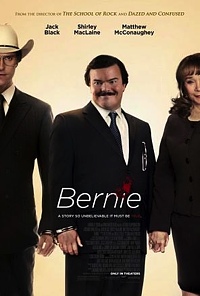 When Bernie moves to Carthage and takes a job at the local funeral home, the entire town instantly falls in love. He’s effeminate, he’s weird, but he sings like a bird and is just about the nicest person you’ve ever met. Bernie truly, truly cares for each of his funeral homes clients, providing loving support for the family of the recently departed–especially the aging widows. In no time flat he’s earned the adoration of an army of old ladies, including the town’s meanest, nastiest, and richest widow: Marjorie Nugent (Shirley MacLaine).

After Marjorie Nugent’s husband dies, leaving her with a massive amount of money, the whole town wishes she would just hurry up and join her husband in the ground. Everyone except Bernie, that is. Bernie sees an old, lonely woman in need of a friend (Bernie thinks everyone could use another friend) and surrounded by people who hate her. Soon they become best pals, spending their time traveling the world together.

If anyone could bring out a dark side in Bernie, it’s Marjorie. She grinds Bernie down, treating him as her personal servant and property, and he’s just too dang nice to do anything about it. Eventually, it’s too much for even Bernie to handle, and he snaps. Well, he shoots her four times and stuffs her body in a freezer. The small town is thrown into a state of disbelief as everyone’s favorite niceguy confesses and heads to trial. In fact, the local district attorney, Danny Buck Davidson (Matthew McConaughey, Magic Mike), seems to be the only one who believes Bernie deserves any sort of punishment at all.

You’d think McConaughey, a Texan himself, would be perfect as a slimy, smarmy, small town lawyer. But truth be told, he’s out acted, out funnied, and out southerned by the residents of Carthage. As the film introduces and interviews each incredibly authentic small-town resident (because, again, some of them are actual Carthage residents), McConaughey’s character seems more and more out of place with his fake hair and fake tan. He almost feels photoshopped into some scenes. The film’s got room for just one off-center character and that’s Bernie.

Jack Black does his best work in supporting roles,2 and Bernie is no different. He’s perfectly cast as a quirky chubster with an endless (well, nearly endless) supply of positivity. Plus, the role gives him a chance to sing, which is always delightful. But the real stars of this film are the townspeople who together form a pitch-perfect look at life in a small Southern town. If you’ve ever lived in a small town, you probably have met (or are related to) their equivalent. Linklater’s decision to use Black as a complement to the residents of Carthage is brilliant; no one wants to watch two hours of quirky Jack Black.

After the credits roll you’ll have such a full and detailed picture of life in Carthage, one that’s been built by stacking 30-second interviews on top of eachother until they form something recognizable. Its funny, clever, and subtle. It’s what Linklater was trying to do with Slacker! It just works way better with a, you know, plot.

You have ever lived in, or knew someone from a small town. Or you love Jack Black, but only in digestible, bite-sized pieces.

Here’s a secret: you can get Bernie right now on Netflix. I swear there is a market for independent movies in Richmond, but until The Powers That Be agree with me, we’re stuck getting movies like Bernie four months after their release.3