A backstage pass to THE LION KING

THE LION KING! The giraffes, the antelopes, the grass, the birds, the stars, Rafiki’s infectious enthusiasm, Zazu’s bouncy personality, and of course the lions. Here’s a look at the marvels of engineering and artistry behind the amazing show.

If you’ve seen Disney’s THE LION KING in the theater, then you know just how breathtaking it is from the moment the very first tips of the rising sun appear on the stage. The giraffes, the antelopes, the grass, the birds, the stars, Rafiki’s infectious enthusiasm, Zazu’s bouncy personality, and of course the lions: Scar’s electrifying scarily delightful evilness, Mufasa’s regal courage, Simba and Nala and their cheeky cubness. It’s Good with a capital G and it’s playing at the Richmond Landmark Theater now through March 11th. You too can be gushing about the musical from dawn ’til dusk!

So now you know about the fact that a) it’s awesome and b) you should go see it. But wait! There’s more! Because you should also know about c) the marvels of engineering and artistry that are an intricate part of the show.

On a warm, sunny afternoon, I met with two members of the production to talk about the bits and pieces of the show and the roles they play in bringing this beloved play to life. 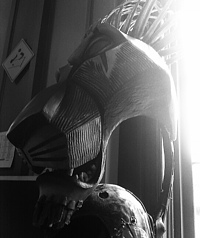 “It’s a helmet, essentially,” Michael Reilly, the puppet supervisor for THE LION KING, explained as we stood next to the imposing lion mask for Scar. “The microphones are all built in. [On] Scar it’s on the back, on Simba and Nala who are there behind you it’s actually built into their heads. So they actually carry a pack and everything, so there’s no wires going down their backs.”

“How exactly does this mask work with the movements?” I asked. Reilly has a background in cars along with electrical engineering (and a family history of theater dating back over a hundred years) so the techie explanation that followed was enlightening and cool:

“So we have a lot of wires–electrical and cable–so what happens is, he’s wired electrically. He wears these motors on his hips, which is why he has jodhpurs, so it hides the motors, keeps them safe, and of course they’re rawhide so they’re very thick. Up his arm we have a cable that runs to his hair, and he wears this on his hand, it’s just a finger control. We have two actuators and an on-off switch so he’s able just to [move] the mask right in front of his face and he has total control of it, he can make it do anything he wants including hurt himself. If he does something wrong, the mask will just scrape right up his face like that. So he’s in total control, and the several motors run on these aircraft cables: very thin wires that crisscross up his back and work the pulleys. It just works on a pulley system. A lot of stuff, and for him especially.”

After Reilly went on to describe the pitfalls of the tricky Scar mask, I asked if there had been any accidents with the carbon-fiber mask on stage. “I hate that you asked me that!” he chucked ruefully. “Yes! Often it happens. In the last month actually, his mask flew off his head and crashed to the ground fifteen feet below. Fortunately he wasn’t hurt but the mask took quite a beating. So what we do is we take our tape and our zip-ties and whatever else is at hand and we stick it back on there and just say, ‘Act gingerly.'”

There are so many puppets in THE LION KING! “Do you have a particular favorite?” I asked.

“Probably aesthetically, it’s Mufasa. He’s just so gorgeous. I don’t know…maybe it’s effort you put into making him look that good too is what you get out of it, and he takes a lot of work. So especially his paint job is very difficult, so what we put into it is what we get out of it.”

“There’s one puppet that I just love,” I said (maybe gushed). “It’s the one that kind of looks like a plough with the antelopes. It’s like a cross between a bike and a plough. How does that work? It looks so seamless.”

“Honestly, that is a marvel of engineering. It has so many different elements going on, but like you said, it’s like a bicycle, and it runs on chains, but at the same time it has these pistons that work almost like a windshield wiper where it’s offset, it’s not fluid. It goes in fits and starts. It was extremely difficult for [Michael Curry’s shop] to build that, and I know it went through so many different incarnations. Once you do see it on stage it is gorgeous. And I think it’s great that you think, when you see something like that, ‘How does that work?’ because part of the show is that we don’t try to hide anything, but at the same time, we want you to marvel at the stuff that is there.” 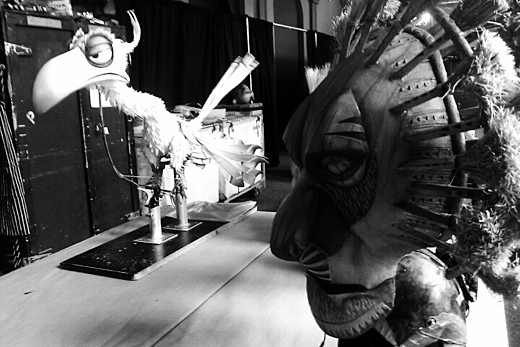 “Could we take a look and see how he moves, is that possible?” I asked after we turned to Zazu.

We moved over to where the springy cream-colored bird sat watching us on a table. “So he has a blink up and down and he can talk.” Reilly removed a part of Zazu’s head (poor Zazu!) and revealed a myriad of tiny gears. “So all that stuff is in there. And I need tiny little hands to get in there.”

“Generally carbon-fiber; the head is made of carbon-fiber, but one of the great things about Zazu is that his neck is made from a Junior Slinky which costs four dollars and thirty-nine cents. So out of a puppet that costs an enormous amount of money I love that one of the main characteristics is four dollars and thirty-nine cents.”

Soon we were joined by Selena Moshell, an ensemble member of the cast. Moshell goes through twelve different costume changes throughout a performance as she plays various animals, sometimes with only a few minutes to make the transformation. “I’ve been with this show a little over three years.” One of her favorite acts is the lioness chant where Sarabi and her fellow lionesses go on the hunt.

“That costume looks really difficult to work in!” I commented, referring to the flowing drapes and masks that the lionesses leap and twist in. “Is it that difficult, or is it more fluid than it looks?”

“The dance is more fluid, it’s like a body leotard and a cape, so it doesn’t really get in our way. They designed it so it will move very fluidly around. It did take some getting used to, as working with all these puppets did. I never trained with puppetry before this, I was just an aerialist and a dancer. So that took a little getting used to, but the design is so fluid that it goes and accentuates our movement in a lot of different ways.”

“It’s beautiful,” I said (gushed again). “Aside from the lioness chant…which scene takes the most work, or is the most difficult to perform?”

“Probably ‘Be Prepared’,” Moshell stated decisively. “Those hyena costumes are like putting on a futon! Literally, the padding, the harness, you’ve got the head up there. It’s a lot of weight, and if it’s hot in the theater you’re extra hot. So that’s probably the most cumbersome one, but it’s still fun since it’s such a fun song that you kind of forget you’re wearing it once you get on stage. Once you get off stage and take it off, you’re like ‘Oh, that’s a heavy costume I wear!'”

We conferred with Michael Reilly.

“Do you know how much the hyenas weigh?”

“I think they’re in the twenty-pound range,” he provided.

“Is it always that the most evil songs are the most fun, or is that just coincidence?” I asked, amused (because who can stop bopping along to “Be Prepared”? No one, that’s who).

“They’re all kind of fun…I don’t know what the most fun song is. I like songs I’m not even in! I kind of wish I was in ‘I Just Can’t Wait To Be King’, I’m always dancing backstage because I’m not in it!”

Emphatically, Moshell explained, “It’s awesome. It’s literally the experience of a lifetime. I’m a professional tourist; I get to go see Monticello and the Virginia Science Museum and I’ve got all these lists of things every time I go to a city that I need to see. It’s really fun, I get to see the country, see beautiful, beautiful places, meet awesome people. I think it’s the best job in the world.”