RVA Magazine: The State of Jazz

By Dean Christesen This article was originally published in the July 2009 Music Issue of RVA Magazine. It is reprinted with permission here. photo: Dean Christesen It’s Wednesday night and Cous Cous is packed. I can hardly make it back to the bar to get another beer, so I stand with my empty glass watching […]

This article was originally published in the July 2009 Music Issue of RVA Magazine. It is reprinted with permission here. 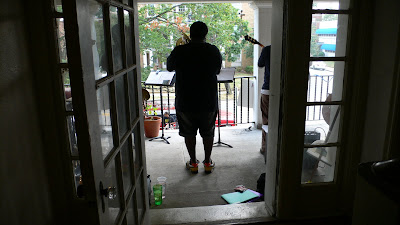 It’s Wednesday night and Cous Cous is packed. I can hardly make it back to the bar to get another beer, so I stand with my empty glass watching Fight the Big Bull play raucously to a full restaurant. The bar is loud and the music is energetic, yet when the music reaches a hushed moment, the audience becomes silent, both out of respect and of genuine interest.

Four or five people sit, legs crossed, engaged in a Brooklyn-based avant-garde trio’s performance at The Camel. A dividing wall in the club can’t contain the sounds of a dance party in the venue’s other half. Management tells us it’s fifty people versus five, and there’s nothing he can do to stop the intruding noise.

In Richmond, both scenarios are not only mere possibilities or outliers on the spectrum of potential audience turnout, but are regular occurrences that happen weekly, even nightly. Our city’s small size can be blamed: there are just only so many people who listen to avant-garde or “out” jazz. But luckily, we benefit from having a unique and creative populate. Even if there’s not necessarily an audience, there’s still a steady output of original and forward-thinking music.

Everyone has their own answer to the question, “What is ‘jazz’?” Like any other city, here there are purists–who believe it must swing and must stem out of the blues to be jazz–and there are those who feel that the jazz aesthetic is one of improvisation and can be open to the influence of contemporary music styles. The purist, straight-ahead jazz artists are alive and kicking in Richmond. Organizations like Richmond Jazz Society play a large role in the music’s preservation and performance, and university music programs like the one at VCU tend to teach fundamentals of purist jazz, including bebop and big band music. This type (many will call it the only type) of jazz is available all over America and worldwide. No matter your location, driving 100 miles in any direction will most likely lead you to more great straight-ahead jazz.

Lately, a trend is forming right inside our city limits involving the more liberal definition of jazz music: bands are forming to play music that ties together all of their influences, with the same improvisational aspect that embodies jazz still intact. These bands are creating identities for themselves that depend wholly on the band’s members. Young musicians here are seeing the successes of their older role models–few of which are much older than 30–in these types of bands and strive to follow in their paths. The older musicians are touring the U.S., making names for themselves and for Richmond, which, until recently, has been overlooked and unannounced in discussions about strong and thriving scenes. 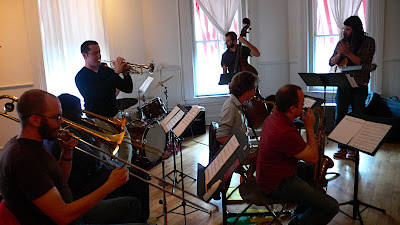 Like any modern punk or rock band, these Richmond bands are breaking new ground and existing to do things that have not yet been done by extending their necks way out of the jazz realm that most of them were educated in. No BS! Brass Band is party music with the soul of New Orleans and improvisational chops of the finest musicians in the city. Glows in the Dark’s brand of avant-garde jazz breathes life into sound like color to cinema. Ombak crystallizes trombonist Bryan Hooten’s sharp, angular thoughts into math metal beats and frantic group improvisation. Fight the Big Bull conjures gospel-laced back-roads big band music with some dance grooves thrown in and surprises (like Michael Jackson’s Thriller or Weezer’s Blue Album) around every corner.

Drummer Brian Jones plays drums in Ombak and percussion in Fight the Big Bull, but ultimately makes up a league of his own in Richmond music. His scope of influence in Richmond extends way beyond his sensitivity behind the drum kit: nearly everyone looks up to him for his massive catalog of creative output he has achieved through the years. Jones constantly composes and records music for his own bands, and not one product has the effect of sounding like a mediocre attempt or a rushed effort to record and move on to something else. From his Guitar Quartet, Double Quartet, Wurlitzer Trio (each preceded by his name) to his duos Jones + Kuhl, + McCavitt, + Curtis, Jones has branded himself a musical identity.

Jones is also a valued member of the music community as a guy who gets things done. Mingus Awareness Project is an event founded in Chicago to benefit research for ALS (Lou Gehrig’s disease) that Jones picked up to organize in Richmond. With two of them under his belt now, he has made M.A.P. the jazz event of the year. October’s event featured stellar performances by his own M.A.P. Trio and M.A.P. Big Band, both assembled for the occasion to perform music by Charles Mingus, and Fight the Big Bull, which performed new music inspired by Mingus.

His Musicircus, a re-simulation of the John Cage creation, has occurred six or seven times now (even he cannot recall which). In September, at least twenty musicians–some organized in duos, trios, quartets, or beyond, and some solo–claimed their spot among bookshelves at Chop Suey Books and played music independent of his or her neighboring performer. The result for the wandering audience member was cacophonous yet beautiful, improvisational and changing at all moments.

Jones’s group Boots of Leather was given a set alongside Sex Mob front man and trumpeter Steven Bernstein–who performed with Fight the Big Bull–at RVAjazzfest in February. Set at The Camel, the night also included a performance by Glows in the Dark and acted to give the spotlight to music that doesn’t often receive overwhelming support in Richmond. People of all backgrounds came: straight-ahead jazz listeners, avant-gard

e connoisseurs, and people who would not even call jazz a favorite genre. Bernstein’s week-long visit to Richmond covered three performances and a recording session with FTBB and gave him insight into the grassroots nature of the scene as well as an opportunity to witness some of the bands that help make Richmond music worthy of attention. 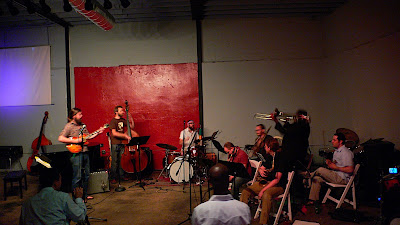 These bands that are considered at the forefront of the jazz scene are still young bands, and the last year has unarguably been the most active one for each of them. No BS! Brass released their most powerful album yet, and their monthly “With Our Powers Combined” series has the group collaborating with other area bands like Ilad, Gull, and Old School Freight Train, and packing The Camel while they’re at it. Fight the Big Bull is preparing to release their second album, this time with Steven Bernstein and again on the prestigious Portuguese record label Clean Feed, and will play at a National Public Radio party in New York City later this month. Ombak and Glows in the Dark have both put out debut albums and continue to gig locally and regionally.

The younger musicians on the scene aren’t missing a beat. They’re at every show they can get into, dreaming up their own ideas for bands and following the blueprints of their older friends. Use The Vastness (aka UTV, which includes members of No BS!), Yellow Grass, and The Compass Rose Orchestra are just three examples of very new bands that are bringing unique musical ideas to the table. These young composers look at their role models’ listening habits and how they shape the bands they lead, like Fight the Big Bull’s Matt White and his reverence of The Staple Singers and Randy Newman, or Ombak’s Bryan Hooten and his affinity for György Ligeti and The Dillinger Escape Plan. The question “What music do I love and how can I make it work with what I learn in music school?” is the catalyst for these bands and their creative decisions.

These younger Richmond bands are often the ones creating new performance opportunities, and in doing so saying goodbye to the formal booking process at established venues. Lucas Fritz, VCU student and leader of The Compass Rose Orchestra (formerly The Fritztet Offensive), started a potluck barbeque in his own backyard. With two occurences already this summer (sequentially titled the Vine St. Rumble and Vine St. Re-Match), Fritz quickly made people eager for another Vine St. Melee.

Reggie Pace, co-founder of No BS! Brass, and Larri Branch created the Thompson & Grace Balcony Concert Series last summer as an excuse for bands to perform on a second story balcony at Saturday afternoon block parties. It’s going strong again this year with concerts already by The Great White Jenkins and Verbatim.

UTV and Yellow Grass somehow found the space to hold a gig at Black Hand Coffee recently on a Friday afternoon. With the sun still shining and the audience sitting within reach of the band, it made for an interesting but totally welcomed concert experience.

A couple hours later across town in the large, open, and sophisticated listening room that is Muse Creative Workspace in the Bottom, Glows in the Dark, Fight the Big Bull, and internationally recognized saxophonist Matana Roberts hit as the sun began to set.

While such eclecticism exists in any artistic city, what Richmond jazz does currently offer is growth at an explosive rate with a consistently high quality of music. This music depends on friendship, trust, and community, which is probably why musicians and bands stick together, hang out together, and play music together. The Richmond pride is communal around here, and they want you to feel it. 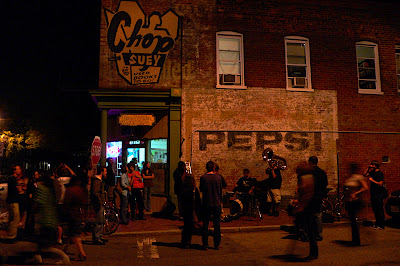 photo: Dean Christesen
RVA Magazine is free and is available throughout Richmond in the Fan, Shockoe Bottom, Shockoe Slip, around Virginia Commonwealth University, and Church Hill. You can also view current and past issues online at rvamag.com