The best bands in Richmond combine strong group voices with unique individual voices. Occasionally, bands will leave character for one night and do something truly special. On Thursday February 24, Glows in the Dark will host “Mondo Italia Dance Party.”

With extremely original compositions and John Lilley (sax), Reggie Pace (trombone), Scott Burton (guitar), Cameron Ralston (bass) and Scott Clark (drums), Glows in the Dark is a spectacular band in their usual element. With many of the members now regularly performing in more dance-oriented groups like Bio Ritmo, No B.S. Brass Band, The New Belgians and Ilad, Glows in the Dark’s members are impressively comfortable with both free form experimentation and backbeats.

Instead of their usual compositions that effortlessly weave through-composed melodic themes that seamlessly transition in to freer improvisations, Glows in the Dark will have one thing on the their mind: dancing. In front of a projector showing sex and violence from 1970’s Italian crime films, the band will take on the roll of DJ. Seamless transitions between compositions and improvisations will keep the crowd dancing for two whole sets.

In addition to all of that dancing, DJ Snow Panda will keep the crowd entertained in between sets with a playlist that will always leave you wondering “who is this?” as unique artists continue the dance grooves. As if the cast of characters isn’t entertaining enough, Lauren Serpa will be sitting in on flute and Eddie Prendergast will be singing a song or two.

The band’s leader, guitarist, composer and all round film guru, Scott Burton, is no stranger to combining films with music. Films or actors that Burton enjoys inspire most of Glows in the Dark’s compositions.

The night will be based on Poliziotteschi Italian crime films. These films are Police-esque films where tough cops are the main protagonists. Oh yeah, they also have everything you might want in an action film: violence, organized crime, car chases, gunfights, explosions and corruption up through the highest level of government. These films combined themes of 1960’s Italian crime films with films like Dirty Harry. By the end of the decade, the directors had turned on their own art and they started creating parodies and comedies. Try and imagine Italian Dirty Harry plus the spontaneous, danceable grooves of Glows in the Dark.

This is the first time anything remotely like this has happened in Richmond. 2011 has already proven to be the year of Richmond musicians taking it the next level and this could be the start of something special for Glows in the Dark. 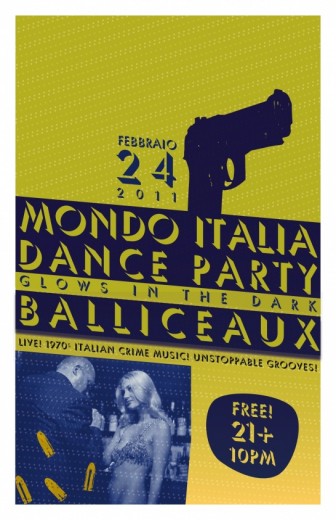