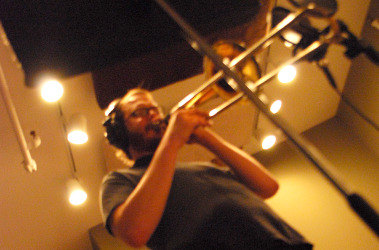 Ombak returns to the studio

On Monday, Ombak went into the new Songwire Studios in downtown Richmond to record for their next album. Trombonist and leader Bryan Hooten said they recorded six tunes — mostly first and second takes — in about five hours. “We recorded enough music to put out a solid EP,” he said. “It covers most of the new tunes we’ve started playing since the first album.”