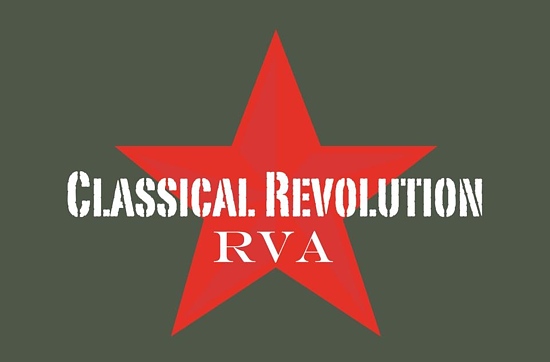 Never has an uprising sounded so good.

“It was actually intended to just be a one-time thing,” Cockerham said about the performance. “But there was such a positive response…that’s kind of how it got off the ground.”

After three months of regular shows at Balliceaux, Cockerham realized that the goal of promoting classical music in Richmond was similar to the mission of Classical Revolution, a San Francisco-based organization founded in 2006 to promote classical music in non-traditional settings, that has over 30 chapters worldwide.

“I realized what we were doing here strongly resembled what is happening in other cities around the world,” Cockerham said. “So I decided to start the Richmond chapter of Classical Revolution so we could open it up to local freelancers, faculty, students–basically any classical musician in the area that’s interested in our mission.” That mission: “Integrate classical music with the rest of Richmond’s music scene.”

Cockerham joined Richmond’s music scene in late 2009 as a Richmond Symphony violinist. She was soon impressed with the city’s relationship to classical music. “For a town of this size, it’s a really great symphony, so that’s definitely a treasure Richmond has,” she said. She added that “world class” performances by theChamber Music Society of Central Virginia only underscore the strong pitch of classical music in the region.

But much of that local classical music falls on deaf ears because it’s confined to limited venues. “It’s downtown and often behind closed doors,” Cockerham said. “If we’re not playing in a concert hall, we’re playing in a church.” Not the venues in which Richmonders typically experience local music.

Yet, the limitation of classical musical venues hasn’t stamped out people’s interest in the music. Over the years, as she spoke with Richmonders in their 20s and 30s about classical music, Cockerham learned many liked it. “But [they] weren’t aware of classical music happening in town,” Cockerham said. “It wasn’t on their radar.”

“I felt like there were a lot of potential classical music fans in town who weren’t currently connected to that scene.”

Part of that disconnect comes from the some of the connotations associated with classical music. “There are a number of reasons why they may think it’s not for them, like either it’s too snooty, or boring,” she said. “I think that’s a stumbling block.”

Ears also recoil simply from hearing the name classical music. “Classical music is a misnomer, but it’s kind of the only nomer we have,” she says. “Classical just refers to a very distinct period in history–Mozart and Hayden and their time–but [classical music has] come to mean, basically, composed music. And it’s still being written today.”

Cockerham recommends that novices begin not with the classics of classical music (Mozart, Beethoven, Hayden, etc.) but other composers:

Classical Revolution RVA plays classical music from all eras. “We perform everything from Baroque music to music being composed today by Richmond composers. So it’s very broad.”

The organization holds monthly performances at Balliceaux and regular jam sessions at Carytown Bistro. In May 2013, Classical Revolution RVA started the Pairs series, in which a single concert is cleaved into two parts: the first half being classical and the second half in another genre.

This Sunday, Classical Revolution RVA will hold its Mozart Festival across several Carytown venues, including: chamber music at Can Can Brasserie at 12:00 PM, operatic performances at Plan9 at 2:00 PM, and a full orchestra performance atBabe’s of Carytown at 4:00 PM, among others. The event concludes with a screening of Amadeus at the Byrd, followed by a Mozart birthday celebration at Portrait House. The entire music festival is free, with the exception of tickets to Amadeus.

Even with a large and free classical music festival, Cockerham knows that many Richmonders will remain hesitant to give the music a try. That’s why Classical Revolution RVA will continue to evangelize the genre by performing it in non-traditional venues.

“I think you really do just have to put…good music in front of people,” she said about winning people over. “Classical music really is universal, and it can speak to anyone.”