The rumor that Lamplighter would take over the Crossroads spot on Morris Street was made official this past Sunday. DECEMBER 20, 2013; 6:53 AM • BY DANIEL WARSHAW “We were approached; we were not out looking for more locations,” says Noelle Archibald, who shares equal ownership of Lamplighter Roasting Company with her husband Zach and roaster Jenn Rawlings. […] 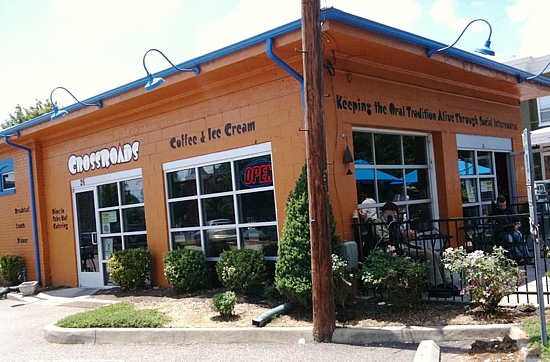 The rumor that Lamplighter would take over the Crossroads spot on Morris Street was made official this past Sunday.

“We were approached; we were not out looking for more locations,” says Noelle Archibald, who shares equal ownership of Lamplighter Roasting Company with her husband Zach and roaster Jenn Rawlings. We’re chatting over macchiatos about their upcoming location that will replace the Morris Street Crossroads coffee shop in February. “As a company [we are] trying to focus more on the coffee and selling the beans to people who are doing quality preparation. But the city of Richmond definitely has a lot of other plans for us.”

The rumor was made official this past Sunday by a letter posted on the door of Crossroads. The letter both thanked customers and asked them to welcome Lamplighter to the neighborhood. In fact, Crossroads’ Will Herring was partly involved in bringing Lamplighter to this prime location. Rather than let a chain move in to one of the city’s most notable coffee spots, Herring wanted a local business–ideally a coffee shop–to take over. “That location itself has been a local, iconic kind of coffee place for so long,” says Archibald. “All of us used to go to World Cup back in the day…I would hate to see that place get turned into a big chain place. I grew up in the city, and World Cup was one of the first places I ever had coffee that wasn’t a diner.”

Nostalgia and the people involved with the deal weren’t the only factors that pulled Lamplighter to Morris street; a few other key elements made the owners consider opening up another shop. The facilities made an impression: “…it has great infrastructure as far as the kitchen goes. We’re currently renting another commissary to do our food prep. We’re kind of limited by the size of our [current] kitchen and the type of equipment that we have. We’ve done little specials before…but we can’t serve a lot of that easily or efficiently.” And the new location should take some pressure off of their first shop: “We’re really crowded here at our original location on Addison Street on the weekends, which is a great problem to have, but…we don’t want wait times to be long. There’s a high demand and we can’t always accommodate the demand here, so we really feel like [the new location is] meeting a need, too.”

While a third location wasn’t originally part of Lamplighter’s near-future plans, Archibald expects a high-traffic cafe to serve their goals of better sourcing and expanding their coffee offerings. “We’re looking at the new location as the place that can have everything. So we’ll be able to offer a full food menu, plus espresso drinks, pour-over, and other brew methods. We’re thinking about having an espresso blend as well as a single-origin espresso. At Addison we have the volume of people for that but we don’t have the space. At Summit [where the roastery is located] we’ve got the space but we don’t have the volume.”

When asked about changes to the building, Archibald explains that they will modify the details of an already a solid layout: “We’re going to build a new bar, we’re going to reconfigure the seating, but the overall structure of the place is really great. That was one of the things that was really appealing. But you’re going to see a lot of features we’ve used in our other locations like stained plywood and poured epoxy over old wood. You know, the aluminum edging and industrial lighting like we have at Summit. So it’s going to feel like a Lamplighter, but it’s not going to be a copycat. We also want it to be a little more colorful than our other spots.”

And what about potential crowds of students from VCU? Will the Morris St. incarnation of Lamplighter soon be overwhelmed? “One of the things we’re really going to be focusing on there is efficiency,” says Archibald. “We’ve already hired most of our bar staff and we’re training them now. We’re going to have a really well-educated barista staff and everybody that works in the front end is going to be a barista. Now we’ve got this facility [at the Summit location] where we can bring people in months in advance and start working with them and start getting them ready. So we’re going to be ready! We’re ready to knock it out!”