Marlana Dunn seems only moderately tired from her breakneck schedule of rehearsing, working out, and performing night after night after night. But she does it because she loves all of us and is committed to keeping us entertained. Also, you should see this very highly acclaimed show. It’s become a recipe for success—take a bunch […] 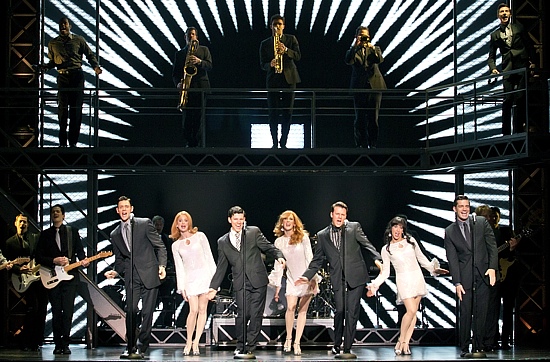 Marlana Dunn seems only moderately tired from her breakneck schedule of rehearsing, working out, and performing night after night after night. But she does it because she loves all of us and is committed to keeping us entertained. Also, you should see this very highly acclaimed show.

It’s become a recipe for success—take a bunch of famous songs and write a musical around them. Mamma Mia and Rock of Ages bring down houses left and right, playing on nostalgia and irony.

Plenty of people will tell you that Jersey Boys is one of these so-called “jukebox musicals.” Don’t believe them. The tale of the Four Seasons and their checkered past is so much more. In fact, if you wanted to go ahead and describe it as not even a real musical altogether, that’d be fine, according to Marlana Dunn, the talented actress/dancer/singer who plays the role of Mary Delgado.

“For the construction of a musical, the music itself, the words—everything propels the plotline forward. And in our show, that’s not necessarily so. I’m not singing my emotions at this moment. It’s not taking the music and building the show around it. Act One doesn’t end with a big musical number. It is absolutely a play,” says Dunn, who spends six days a week performing on a tour that has dates stretching into 2015.

The show’s popularity springs from the writing talent behind it (Marshall Brickman and Rick Elice), the performances, and, of course, the source material. In an example of what’s known as the Rashomon Effect, the Seasons—Tommy DeVito, Bob Gaudio, Nick Massi, and Frankie Valli—each tell the truth as they saw it. And the truth isn’t the corny, slap-your-thigh-and-grab-your-dancing-partner stuff you might find in a traditional jukebox musical. “There’s a lot of comedy in it, and there’s a lot of seriousness in it,” says Dunn. “But they’re Jersey guys! They’re in your face, they’re cursing, and they’re brash.”

That’s one of the reasons that the cast of Jersey Boys like to call it a “guys’ musical,” according to Dunn. “They find it incredibly relatable. A lot of times women drive their husbands to the theater. Here, men will drive their wives to the theater. It’s so great to watch people when they’ve come without expecting anything and end up loving this musical about four dudes—sorry, for lack of a better word.”1

Dunn and her female colleagues—there are only three women in the show—play 52 different characters. I mentioned to her that I’d read a stat that between rehearsals and performances, actors in Jersey Boys walk something like two-plus miles a day, and she explains that they are constantly singing and dancing, even when they’re not onstage. It takes a lot of healthy food and serious workout routines to be able to keep up night after night. Her own role, that of Frankie’s first wife, speaks to her in a way: “She’s very bawdy, very strongly opinionated, and doesn’t hesitate to put anyone in their place. Very what you’d think of as a stereotypically strong Jersey Italian woman. For me, personally, I have a very thick outer layer as well, so it wasn’t too had to tap into the things she requires—that strong assertiveness.”

Touring companies don’t spend a lot of time with friends and loved ones, and often have trouble even putting down roots. Dunn rattles off the times she’s made it home to New York this year. It doesn’t take her long and amounts to something like three days total. “But being part of something so big that it’s being translated into foreign languages…I really don’t have an words. It’s awesome, even though it comes with a lot of responsibility.” As a singer-turned-dancer-turned-actress, Dunn’s many facets keep her busy in a show like this, but the results have been worth it as she discovered one calling after another. “You have to be able to connect emotion and realness to the songs that you’re singing and the movement you’re making,” she says of her own acting talents, the improvement of which takes up plenty of her fleeting idle time.

First-timers to Jersey Boys should keep an eye out for Dunn’s pizza scene, the most comedic in the show and the one of which she’s most proud. But, she swears, you’ll love the rest of the show too. “I love standing in the wings and watching the rest of the audience when they’re not even aware that they’re bouncing along to the music in their seats.”

For those of you still unconvinced, she recommends thinking of it as a VH1 Behind the Music. “You’re learning fascinating facts about the group while also getting to experience live versions of their songs. It’s incredible.” And, just a little spoiler-teaser, those facts aren’t anywhere near squeaky-clean.

Catch Marlana Dunn as Mary Delgado and wonder at her unflagging energy. Jersey Boys opens tonight at the Landmark Theatre and runs through January 19th. Get your tickets and all of the answers to your questions here.