World Cup: US vs Germany

“I think both teams go into this game and they want to win the group.” – Jurgen Klinsmann, USMNT Coach 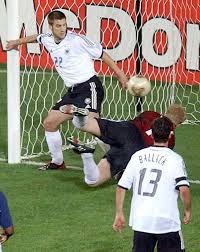 The most famous meeting between these two teams, besides of course the movie Victory1 which is Sylvester Stallone’s best World War II soccer film ever, was in 2002 when the Germans used their hand to push the Americans from the 2002 World Cup in the quarterfinals. The two have met a total of nine times, and Germany has been the decisive winner, walking away with six wins and 21 goals, compared to the US’s three wins and a respectable 15 goals.

If you had asked any USMNT supporter if they would have been happy with four points (3 for win over Ghana, 1 for tie with Portugal) you’d have been hard pressed to find anyone to disagree. The last minute goal by Portugal was gut wrenching for US fans, but for the team I feel it was less devastating. They know they have to do exactly the same thing they’ve done in the past two games and grind out a result. With a tie or win, they move forward to the round of 16. Memorize this page and you’ll be the expert on what it takes for the US to move forward.

Jermaine Jones — who’d been previously criticized for erratic play and behavior — was a beast last game. Michael Bradley (when you take an honest look at his game) had a fairly strong game, save for two mistakes. Those mistakes arguably cost the US two goals when he missed a wide open net and when he turned over the ball in midfield, which led to Portugal’s tie in the waning seconds of the game.

Has perhaps the best nickname in the World Cup with Die Mannschaft. It sounds scary, and on paper this German team is pretty terrifying. The Germans are ranked 2nd in the world and have six players from European powerhouse Bayern Munich, players from US marketing powerhouse Aresnal, and Champion League runners up Borussia Dortmund. Despite the world class pedigree, the Germans didn’t look world class against Ghana, a long-drawn slog of an affair that ended in a tie.

As said before, a tie and both teams go through. Both sides have said they have no intention of playing for a tie, but you can’t help but feel that “tie and we’re through” will be in the back of every players head. Asked about the possibility of playing for a tie immediately after the Portugal game Klinsmann had this to say: “I don’t think that we are made for draws, really, except if it happens like tonight — two late goals, last seconds, I think both teams go into this game and they want to win the group.”2 The coach is saying the right things, but who knows what happens on the field.

Familiarity is also something that can’t be easily quantified. Klinsmann coached the German national team in 2006 to a third-place finish in the World Cup.  His assistant from that time, Joachim Low, is now coach of the German team. Bastian Schweinstager, Miroslav Klose, Phillipe Lahm, and Lukas Podolski all played for Klinsmann when he was coaching.