One of the best soccer talents in the nation, VCU’s Jason Johnson will leave RVA to play with the Houston Dynamo. Today, VCU soccer forward Jason Johnson was selected by the Houston Dynamo in the first round of the MLS SuperDraft as the 13th overall pick. Last month, Johnson, a 22 year-old junior, accepted a Generation Adidas contract (see below), which guarantees him at least two years of MLS play, as well as a stipend to complete college at his choosing.

It appears that VCU forward Jason Johnson has signed a Generation Adidas deal. As a result, the junior will be an eligible player in the upcoming MLS Draft.

Generation Adidas contracts are given to young college players as a way to retain soccer talent in the US. It offers players two guaranteed years in the MLS with salaries above the league minimum ($44,000), and also affords a stipend for players to complete school within 10 years (see article below).

It’s fitting that Jason Johnson is from the Jamaican town of Happy News. If things go well for the 6-foot VCU soccer player, Johnson will receive the news that he’s been named to the Generation Adidas class, and will be fast-tracked into a career as an MLS player.

The mohawked, 22-year-old junior came to VCU in August 2010 after being recruited under head coach Dave Giffard.

“He’s got an interesting combination of size, speed, power, and technique that not a lot of guys have,” Giffard said of his forward, who was once a member of Jamaica’s Under-23 Olympic Qualifying squad before he arrived in the US. “Those were the things that attracted us to him.”

In his first year at VCU, Johnson was a CAA All-Rookie Team honoree. In 2011, he garnered All-CAA second team honors and finished the year with 23 points from 11 goals and one assist.1 In early October 2012, he earned Player of the Week recognition from both the NCAA and Atlantic 10 Conference.

In 2012, Johnson ranked first among Atlantic 10 players with shots (89), and second in total goals (32). Giffard said that Johnson has had a “good 2 1/2 years of growth and development” at VCU and that “MLS is starting to take notice of where he is.” 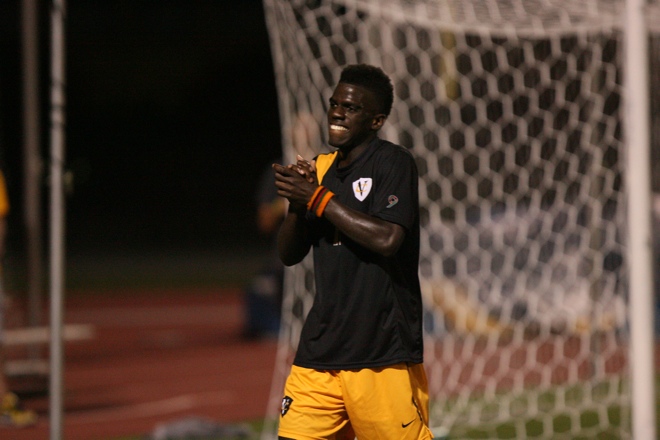 Later this year, MLS will likely designate between six and eight high school and college players as members of the Generation Adidas (GA) class. According to Giffard and the website Soccer By Ives, Johnson may well be one of those players–becoming the first VCU player selected for the distinction (a spokesperson for VCU Athletics said Johnson would not speak publicly about the GA until after the MLS draft).

The purpose of GA, said Giffard, is to “provide an avenue to entice the top young players in the country” to play professionally before they graduate college. MLS teams recommend players to the MLS League Office, who then in-turn offer contracts to the top players. Those who accept enter the MLS SuperDraft held on January 17, 2013 in Indianapolis, Indiana.

Not only do GA contracts offer salaries above the league minimum ($44,000 in 2012),2 but Giffard said the contracts also provide players an “education stipend to then be able to go back and finish their degree” within 10 years. Most GA contracts offer players two guaranteed years with an MLS team with two option years, a valuable stepping-stone into professional soccer.

“Obviously, it’s an exciting opportunity for [Johnson]… [he’s] one of the top players in the country.” If anyone would know, it’s Giffard.

Before taking the coaching reins at VCU in 2010, Giffard coached the University of Akron’s Men’s Soccer team. He coached and recruited 36 players that went on to play professional soccer, including the No. 1 overall pick in the 2010 MLS draft and two past members GA. He said that Johnson exceeds the past talent he’s coached.

“I’d put him on top of that list,” he said, saying that Johnson is “someone who has the potential to move on from the MLS to Europe” to play in leagues that showcase the world’s best soccer players.

VCU ended the 2012 season with 12 wins, the most for the team since 2007 (and the most under Giffard). The team also earned double-digit wins in back-to-back years for the first time since 2003-04. This year’s success earned the team an at-large bid and 14-seed in the NCAA Tournament, the team’s first appearance since 2004.3

“We want to turn VCU into an annual contender for the national championship,” Giffard said. “We’re going along the path we need to be on…we’ve made significant strides and gains.”