Kinda like Sixth Street Marketplace, but in the opposite way! Photo by: Casey B. Gibson

If the UCI World Championship was your first foray into the world of professional cycling (as it was for many of us), you might have not know what all the hubbub was about when Slovakian champion Peter Sagan tossed his helmet into the crowd and strode around, charmingly high-fiving spectators and cyclists alike.

It’s understandable. If you don’t know the history of how all these guys interact, it just seemed like this one Slovakian rider just made his way out of the peloton, threw himself up 23rd Street faster than everybody else, and then won the rainbow jersey. And, actually, that is pretty much what happened. So why did the crowd go completely nuts?

Former pro cyclist, current Richmond Cycling Corps Director of Development, and my new favorite person to chat with on the phone, Matt Crane clued me in yet again!

One quote I heard the commentators say as Sagan was sprinting towards the finish line particularly confused me and went something like “If the Americans could have anybody win except them, this is who it would be!”

It turns out, pro cyclists don’t always have the best personalities. Matt Crane puts it a little more nicely when he says, “Most of the humanity of the riders is expressed on the bike. You see it in the suffering and the drama in the race, but there’s a real lack of guys showing humanity off the bike.” In other words, they spend so much emotional and physical energy in this sport that demands etiquette, consideration, and cooperation, that in real life, they can be real dicks.

Jacques Anquetil, legendary French cyclist and first five-time winner of the Tour de France1, was quoted as saying, “To prepare for a race, there is nothing better than a good pheasant, champagne, and a woman.” That kind of attitude doesn’t help dispel the stereotype of cycling being an inaccessible aristocratic sports. And maybe it is, maybe it isn’t, but it certainly won’t become LESS so without some help.

“Peter Sagan is probably the best of his generation,” says Crane of the 25-year-old. “He’s always up to antics off the bike, he’s really accessible, and he’s a real showman. His victory celebration when he threw his arms in the air at the finish line was totally unheard of. He handed off his bike right away–nobody does that! He just has his own flair.”

He’s also won a ton of other races in the U.S., so Americans have had a chance firsthand to get emotionally involved. I dunno, maybe our cuisine agrees with him. American cooking: propelling cyclists to greatness?

Check out his winning combo of confidence, shyness, humor, and earnestness in the post-race press conference:

Not just known for popping wheelies at the finish line of races he wins, Sagan rides the ride as well as talks the talk. The man is a physical paragon.

“It was a testament to the course,–let’s say you’re watching from Libby Hill and then on the Jumbotron, if you’re watching the last lap, you’re watching a showdown. There had been three significant moves before the last lap but then everything came together–whoever’s got it in the legs, it’s time to go,” remembers Crane. “And really you can tell by the way that he won the race, he was by far the strongest rider. It was mano y mano on the 23rd street climb. He had made zero moves the whole race, then he made just one attack and executed it perfectly. He just blasted up 23rd street, no one could stay with him, and he just held it to the line. It was just raw strength, it was him versus everyone behind him and he just simply outrode them. Everyone at Libby Hill was chanting his name [when we were watching his last attack]. I had goosebumps, it was incredibly emotional. He did it with pure courage and emotion. He won it in absolutely the best way possible.”

This video has a lot of great Sagan moments from his entire season, including the charge up 23rd Street, the finish on Broad, and the progression of his hair. Give the man a tattoo and he will basically be adopted fully by Richmond, Virginia. We love anybody who throws us a helmet and slaps us a high-five.

I’m the baby, gotta love me

Despite being young as all get-out (remember Crane’s prediction that it would have to be somebody old and salty who’d win the race?), Sagan has embodied a lot of the great principles of cycling as well. You can see in finish line footage the delight and excitement of the guys who were his competitors mere seconds before.

It may be rare that such a young and fresh rider commands the level of respect and genuine affection of his fellow athletes that Sagan has, but it does jive with the rest of cycling’s overall vibe. “The competitor may have won, but there’s so much respect for each other, and the first thing you do when you get beaten is congratulate them,” Matt Crane says. “There’s a feeling that you’ve shared in a common peril. I really love that about cycling. Yeah, we’re competitors, and we’ve just been trying to kill each other on the bike, but at the end of the day we’ve gone through this hellacious endurance experience together.

“It’s almost like you see a barfight and then the next minute they’re best friends. It’s a post-battle sort of euphoria. But Sagan especially, both with the fans and the other riders, he’s extremely well-regarded.”

Those of us who live and work in Richmond had mixed feelings about the race, and those feelings have most likely shifted in multiple directions over the past few weeks, months, or even years. Our publisher, Ross Catrow, said over and over in the past year: “I feel like it’s not going to be that big of a deal, inconvenience-wise, and it’ll just be a fun thing for us to do.”

I’m sorry to admit that I had my doubts–and probably a lot of them were caused by just media burnout. We get tired of writing about the same topic for month after month, and even though we might amuse ourselves by making up nicknames for the race2, there’s a lot of fatigue. And then, cynicism starts to creep in (I’ve never been good at keeping it out), and you find yourself just hoping it’ll all be over soon so you can focus on something else.

If I may make a cringe-inducing parallel, on the last lap, I found my energy by forcing myself to pay closer attention to the race itself instead of treating it like a snowstorm and covering the fallout of it. And I definitely wasn’t alone–Richmonders seemed to realize that not only was using one exit over another exit something that could be done, but that it feels good to have a common thing to cheer for. Not just in the “Olympics are fun because we’re all on Team USA” way, but also because we got to be the VIPs. Team USA is in OUR hood. They think WE are really interesting. They’re riding on OUR streets.

Yes, we will see some hard data at some point (estimates currently number onsite spectators topping 645,000) and a forthcoming economic impact study will certainly get people grumbling for one reason or another. They’ll fire up the Facebook app on their phone and tap out a long thing about how obvious it is that the city should have done it this other way or how they heard some anecdote of someone having to swim across the river to get to work.

I think we, as citizens, are right to ask lots of questions and put the city to task. I do not think we, as citizens, should exult in the city’s failure and resent its success. I don’t know where that mindset comes from, but it turns any potential progress into a paradox. Do we want it to fail, so that we can prove a point about how everything fails? What good does that do anyone? So that we can load up our Twitter with the jokes we’ve been working on really hard in the shower?

But I think that moving forward, we will understand a little better that the big cities, the hardier cities, the ones who get more fun things to do–they’re all used to this sort of thing. We show our provinciality by moaning and groaning. We will stay small if we think small.

Says Matt Crane, “I was getting text messages from friends from out of town and my old teammates that Richmond was amazing. The spectacle on Libby Hill and on 23rd Street was so positive, people really turned out for this thing. The riders were really, really impressed. Yeah, there was this dialogue in town about traffic delays how this is bullshit or whatever, and I would think ‘What the hell, people, are we just never going to have events in town just so you don’t have to sit in traffic for 20 minutes?’ Look at any video of the Fan or Libby Hill from the races–there’s no argument against that.”

I asked him a few times over the course of our conversations if he felt any sadness about not being part of the national team and not riding this course. But oh, ride the course he did. Crane took the Richmond Cycling Corps kids on the course as part of Friday night’s “Conquer the Cobbles” ride.

“We didn’t think it would work out, but at the last minute we enlisted CapTech, Dominion, and Sports Backers, and we got 11 kids out there,” he says. “It was raining, it was night, everyone had blinking lights on, and we’re blasting through the city through the closed course. The kids were stoked. I raced the world championships 11 years ago almost to the day, and then 11 years later I’m out on the world championship with the kids I coach–these amazing kids from public housing on this European sports race course.” 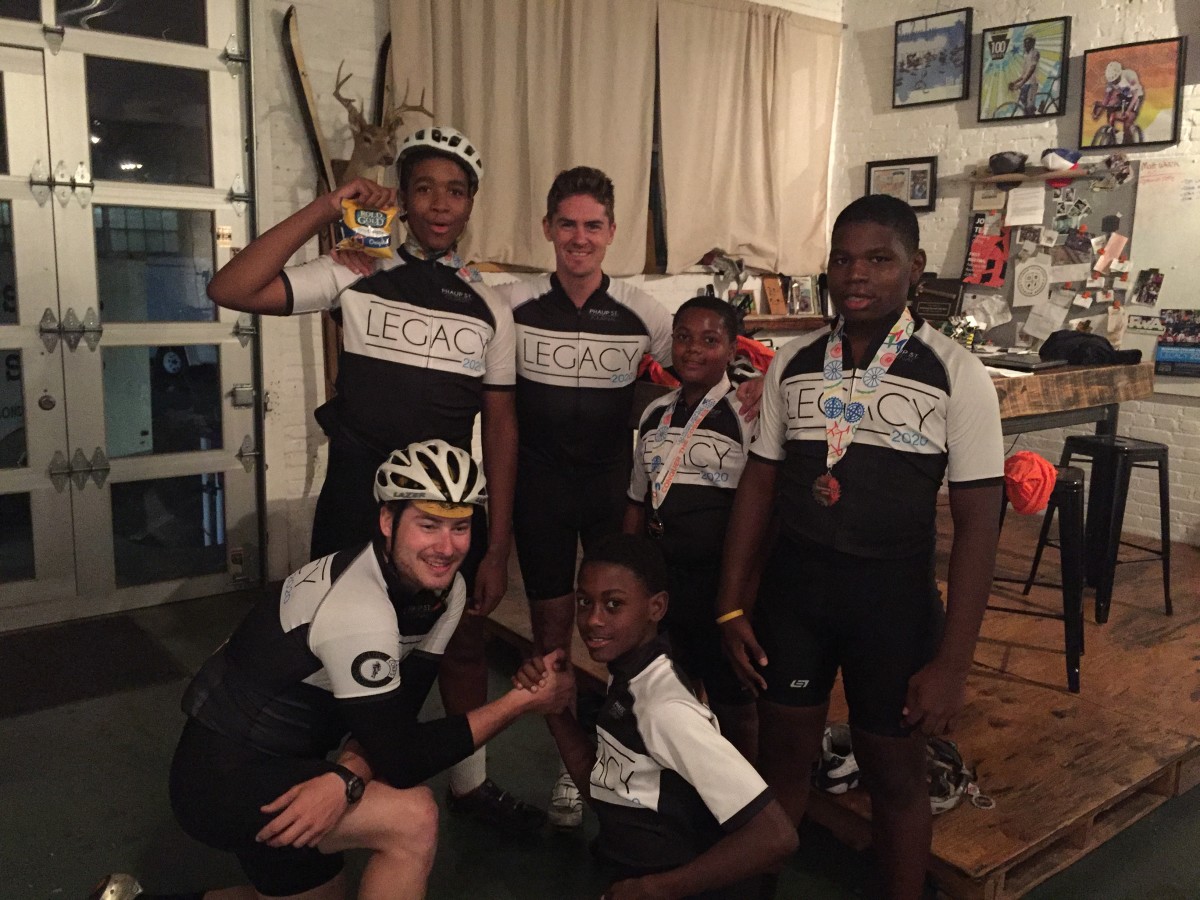 I detected no sadness in that voice. In the end, people like Matt Crane wanted us to be excited about something he feels is good for the world. And we were. He wants our city’s kids to know that people want them to succeed, and they do. And he wants it all to happen again, because it was awesome.

“I feel like Christmas is over,” he sighed.”No–like nine Christmases ending at once, since there were nine races. But…we did something unconventional and weird, and we didn’t know what was going to happen. And now, what should we do next? Maybe we’ll start moving forward from here.”

You may help out Matt Crane and Richmond Cycling Corps by donating, getting involved, or coming out to see the kids race. It’ll be worth it.