Guys, I love college football, and attending a practice is one of the cooler (not temperature-wise due to the sweltering sun-heat) things my job has permitted me. And what better way, I ask you, is there to inaugurate the 2010 football season than by attending a practice!?

Yesterday was opening day for UR football training camp, and it was as hot as the surfaces of two suns — like big ones, supermassive giants. I showed up for my first UR football practice as “press” and instantly began sweating. This is why I always wear an undershirt. After listening to Coach Scott and taking a few pics, I retreated up to the shaded — and seated — North Stands. 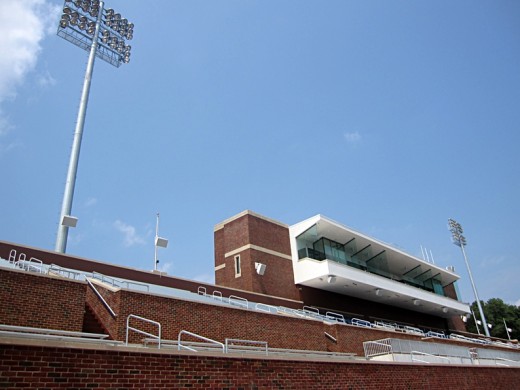 Guys, I love college football, and attending a practice is one of the cooler (not temperature-wise due to the sweltering sun-heat) things my job has permitted me. And what better way, I ask you, is there to inaugurate the 2010 football season than by attending a practice!? 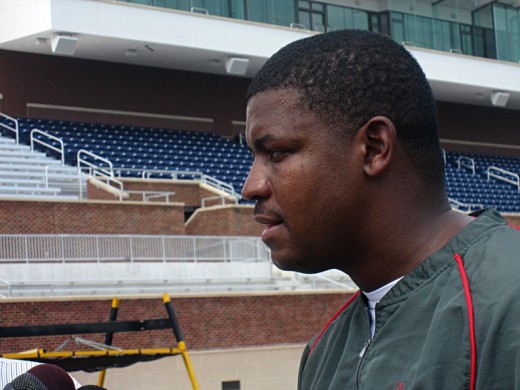 Anyway, back to the North Stands. I grabbed a seat, took out my pretentious iPad, and began to write down some OF THESE VERY THOUGHTS. As practice continued several grizzled football veterans/parents/ex-players or some combination thereof joined me. Topics of conversation ranged from vacation spots to how much weight the offensive line has gained since December (a lot). It was quite the little community. Everyone was wonderfully pleasant.

The new stadium is pretty pro: lots of collegiate gothic UR-defining brick and concrete, the scoreboard is framed by tall pine trees, and the luxury boxes are glass and modern*. The field is that artificial stuff with the fake black rubber dirt. Everything is shiny and new and waiting to be used. Note: The thing was built to be expanded; seats in the West End Zone are an inevitability. 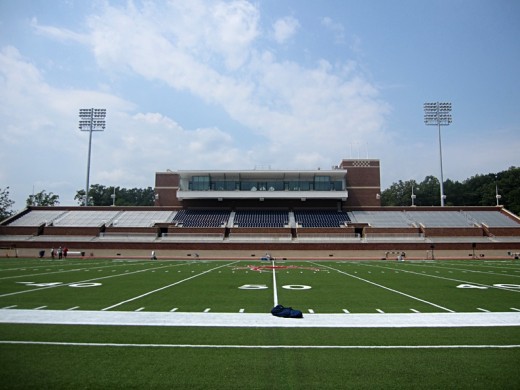 The most popular question facing the Spiders, although maybe not the most important one (here’s a good one: there’s only one starter returning on the offensive line?), is who will replace Eric Ward at quarterback? We’ve got two options: golden-boy USC transfer Aaron Corp, and redshirt sophomore John Laub. Corp was due to inherit the signaling calling mantel at USC (they literally have a mantel there**) before injury derailed that plan. And, here is what I know about John Laub: he is a redshirt sophomore, he is from Pennsylvania, and he was 9-18-1 (attempts, completions, interceptions) last year. YOU DECIDE.

Honestly, neither of them looked incredibly sharp, but that’s expected for the first practice.

Corp seemed a little more consistent in his passing and I did see lots of REALLY tall balls (that’s what she said) thrown by Laub — most of them while he was rolling left. Coincidence or not? YOU DECIDE. Full disclosure: I had to leave before full team drills, these were just passing drills.

I wrote down #80 Matt Scherer’s (WR, rFr) number a couple of times. He had one nice leaping catch on a high pass from Laub. Also #43, Brandon Scott (DE, rFr) is monstrous.

I’m hoping to head back to the next open practice and stay a little bit longer. Go Spiders!

* How much does that sentence feel like a food review?
** No they don’t.