So…what’s the deal with the pirate at Flying Squirrels games?

The swashbuckler has traded in the keys to his helm to help Nutzy rally the team. He’s traded his former life of pillaging and plundering on the high seas to become one of he Flying Squirrels‘ most interesting mascots. His name is Captain ARRR VA, and he came aboard The Diamond back in April.

Captain ARRR VA takes the helm on a scissor lift just beyond the right field wall whenever the Squirrels are at bat. “He stays closer to the ground in the beginning and as Squirrels start to get on base, he starts to rise higher and higher,” Semonich said. The Diamond’s graphic boards display “SCORRRE” and “We need an RRR-BI” to help him rally the crowd. He also fires a cannon whenever the Squirrels first score or hit a home run.

In addition to his rallying duties, Captain ARRR VA also visits birthdays parties in the tailgate zone, signs autographs in the autograph hut at the top of the first inning, and mingles with the crowd by the front gates before and after games.

Captain ARRR VA isn’t the only non-squirrel related mascot the Flying Squirrels have. The team also employs the services of Victor the Viking.

At least Nutzy now has some friends to keep him company between games. 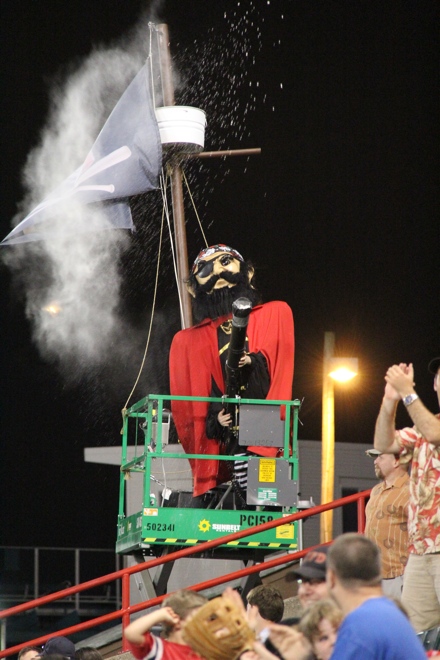 The Flying Squirrels resume play at home on Tuesday, August 20th at 5:35 PM against the Harrisburg Senators.