Safety on the James: high water levels heading into fall cause concern The James River is known for its beauty and elegance, its adventurous rapids, and its lively shores for sunbathing and swimming with friends. But it can also be a deadly nightmare.

Each year, as many as three people die in the James within the Richmond city limits. The Richmond Fire Department’s Water Rescue Team answers between 70 – 80 calls for rescues each year, and in 2012, the team rescued 73 people from the river waters. From June through August the rescue teams are on high alert and have answered 26 calls this summer already.

“What gets people in trouble the most is the fact that the flowing water is so powerful and most inexperienced people who haven’t been out in the river before…they underestimate the power of the water,” said Captain William Vytlacil of Station 24 Water Rescue team.

The James River Park System encompasses nearly 600 acres in the city of Richmond. Last year, between 600,000 and 1.5 million people visited the park. With the river hitting far above average heights for this summer, safety risks become a huge concern during the river’s prime visitation season.

The force of the water increasing exponentially with the rise in the water, which can create deadly situations for visitors and the water rescue teams.

“Every time we go out on the water we are in danger,” Vytlacil said, adding that nearly every time the team is on a rescue a firefighter slips or is hurt.

Richmond is located on top of the southern portion of the Piedmont-Coastal Plain fall line, a 900-mile ridge formed from continental shifts millions of years ago. From Bosher’s Dam to 14th street, uneven rocks are pushed up into the river, making some of our most fun and also potentially dangerous places to swim.

“One of the biggest issues we’ve been seeing this year especially with the increased flow of water has really been a lot of folks just not respecting the power the river actually holds,” said Nathan Burrell, James River Park manager.

Burrell has been telling people for weeks to be careful around the river during times when the water is high. But the as temperatures rise, the urge to take a dip becomes much more tempting, “and that’s the time when people start getting into trouble,” Burrell said.

Each day, signs are posted near every entry point onto the river that tell park visitors how high the water is that day. At 5 feet, a lifejacket is required to swim in the water; at 9 feet, only users with permits are allowed on the water; 12-foot water is considered flood stage.

With the summer now headed into tropical storm and hurricane season, there may be a lot more water to come for the James.

Although he can’t predict how long the high levels will last, Burrell recommends to take extra precautions when visiting the river: bring a PFD or lifejacket, always put children in life jackets, and respect the power of the river.

“It’s kind of selfish of some people to go out, to play in the river at levels that we have signs…when they decide to ignore that information that’s out there for the public’s good they put other people at risk,” Burrell said.

This image shows the current water level in the James as measured at the Richmond-Westham gauge. That gauge is located just upstream from the Huguenot Bridge. 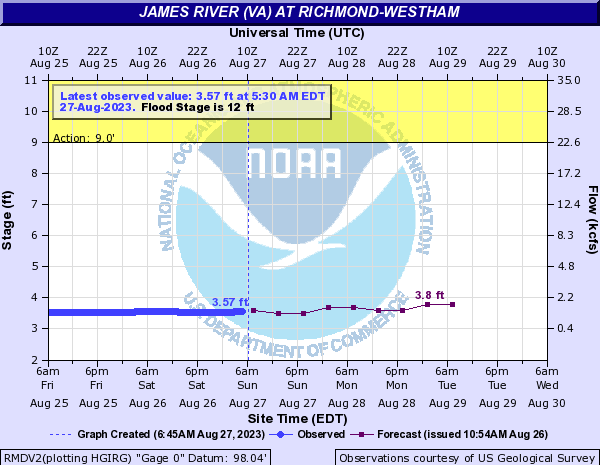