We know kids love to climb, but so do adults. Luckily, Richmond is a great place for them. “Before I started climbing I was very scared of heights,” said Aaron Williams, a VCU student who also covers VCU men’s basketball for RVANews. He’s been rock climbing for over a decade, and learned to do so here in Richmond. “For me, a huge part of the rush I used to experience when climbing was attacking that fear. It’s a unique sport. A climber doesn’t have to be a certain height or weight to be really good.”

He began climbing when he was 8-years-old at Peak Experiences in Midlothian, one of the largest indoor rock-climbing centers in the US. After taking classes and joining a competitive climbing team, he grew to prefer climbing outdoors. While he loves the places that basketball can take him, they’re never as good as being in the outdoors. “Rock climbing…happens in amazing places like Looking Glass, North Carolina; Joshua Tree, California; and Grand Teton National Park, Wyoming.” All places he’s been to.

While perhaps not in the same league as those places, Richmond has its own share of rock-climbing locales. Two are in the James River Park System: the Manchester Climbing Wall and the quarry wall at Belle Isle. 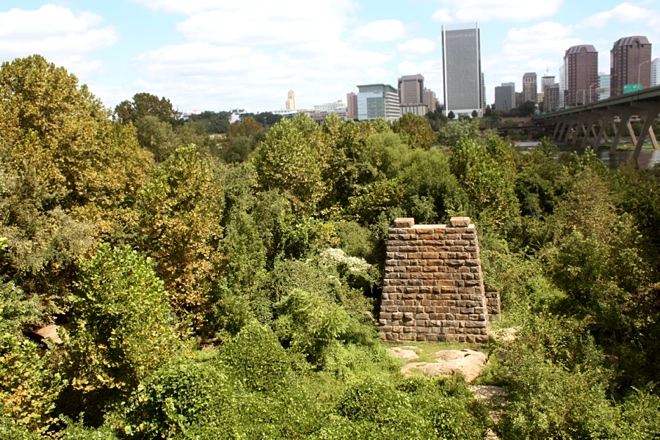 The Manchester wall,1 a remnant of an old railroad bridge, is made of granite with a peak that tops at 60 feet. Its difficulty level ranges from a 5.4 to 5.11a,2 which means climbers should use top ropes to ensure safety.

The Belle Isle wall is located on the north side of the quarry pond. The 35-foot limestone wall is accessible upstream from the Hollywood rapids. It has an average difficulty of 5.7, also requiring the use of top ropes.

Although there’s such a thing as competitive climbing, it’s typically a solitary sport. Any competition is with yourself. “Winning isn’t a score, it’s conquering a fear or pushing oneself to the next level,” Williams said.

But if outdoor climbing makes your knees tremble, you can always visit Peak Experiences in Midlothian to learn and acclimate yourself to rock climbing. VCU also offers a 35-foot indoor rock wall for its students, staff, and faculty inside the 18,000 square-foot fitness center on Cary Street. There’s also a shorter bouldering wall for gym users uneasy with attempting the 35-foot climb.

“Climbing is a big part of the gym here,” said Joey Parent, assistant director of VCU’s Outdoor Adventure Programs. “You have a lot of people who are not as interested in lifting weights or swimming in the pool.” The walls gives gym users an alternative workout.

Parent said the wall also introduces newcomers to outdoor rock climbing3 and other recreation beyond the indoors. “The climbing wall is a really good way to get people into the outdoor program.”

But rock climbing is just one outdoor recreation that VCU students and other Richmonders have at their disposal. There’s also kayaking, mountain biking, outdoor runs, and more. All of these things, Parent says, are important in shaping Richmond’s identity. “Richmond has a very strong outdoor community,” he said. “There’s a lot of really great things that are right here and are accessible.”

Aaron Williams agrees. “Richmond is a great outdoor sports town. The river and the parks surrounding the river offer really unique opportunities in urban areas especially for kayakers, climbers, and bikers,” he said. “People can leave their nine-to-five jobs and be kayaking by 5:20 PM or rock climbing by 5:15 PM.”