Redskins vs. Raiders: Victorious in Oakland

After going down 0-14, The Redskins score 24 unanswered points to get their first win of the season. Victory is always possible for the person who refuses to stop fighting. Napoleon Hill

This season, the Redskins losing had almost become as certain as Eric Cantor calling Barrack Obama a socialist. Well, maybe not with that absolute certainty, but still: the team had not won a game.

Through three games, the defense had given up the the most yards (1,464) since 1951 when the New York Yanks gave up 1,494 to opposing offenses (the Red Strader coached team finished the season 1-9-2). The offense wasn’t much better. They couldn’t move the ball, they turned the ball over, and they made stupid mistakes. Not surprisingly, their yin and yang of porous sieve and timid flaccidity has kept renditions of Hail To The Redskins to a minimum this year.

Going into Oakland yesterday, the Skins needed to play against the Raiders and not against themselves. 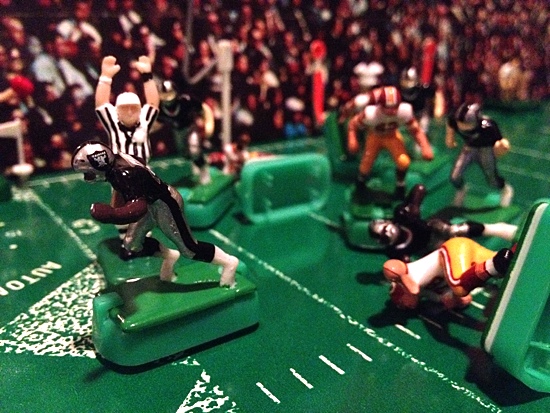 Jeremy Stewart recovered Rashad Jenning’s blocked punt of in the end zone to make the score 6-0 early in the first quarter.

And that was the first thing they did. After trading opening offensive ineptitudes, the Raiders scored the first points of the game recovering a blocked Seth Rocca punt in the end zone. It was an inauspicious start; the Skins have been outscored 67-21 in the first half this season. 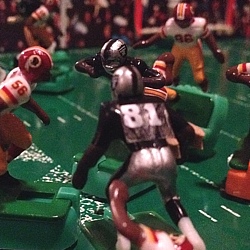 Adding to the dread, after another failed Redskins’ offensive series, back-up Raiders quarterback Matt Flynn (filling in for concussed starter Terrelle Pryor) led the team on a leisurely 10-play, 80-yard touchdown drive before the end of the first quarter. As my favorite Polish-born American football placekicker Sebastian Janikowski made the score 14-0 to the roaring approval of the black hole, my wife and daughter walked into the house.

“Are the Redskins winning daddy?”

“No baby, they are losing”

Neither of us were surprised.

On the next Skins drive, Griffin lead a no huddle offense that showed promise. Things were clicking, and a crisp selection of runs and passes had the Raiders on their heels. On 2nd-and-4 at the Raiders’ 4-yard line, the drive got sidetracked when Griffin was flagged for intentional grounding–pushing them back to the 18. Pierre Garcon almost made up for it with a beautiful catch and run, but they had to settle for a 25-yard John Potter field goal. The drive–easily one of the best of the season–was run too well to only walk away with three points.

At that point, I didn’t know the Redskins defense wouldn’t let the Raiders score another point. 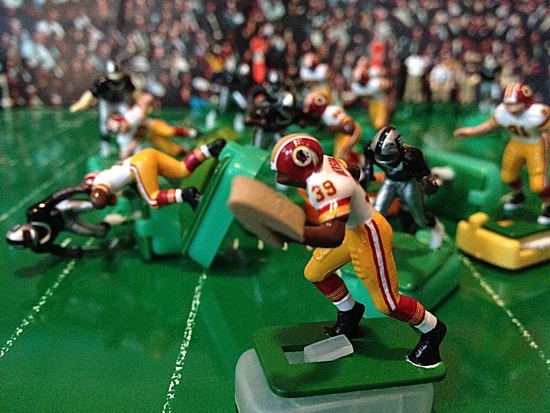 20-year old rookie cornerback David Amerson scores the Redskins first touchdown of the game on a 45-yard interception return of a Matt Flynn pass early in the 2nd quarter.

With momentum neutralized by the field goal concession, the defense took the field needing to stop the Raiders. On 3rd-and-5 on Oakland’s 43, David Amerson stepped in front of a Matt Flynn pass intended for Denarius Moore and got the six the offense couldn’t get. His first and the Redskins’ third interception return for a touchdown this year, the interception invigorated the team. It was the most important play in the game. After that, Matt Flynn didn’t play like he was trying to win, he played like he was trying not to lose. 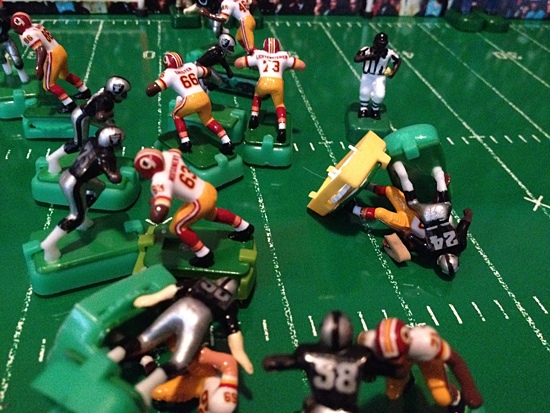 On their next drive, the Skins moved the ball as they had before. On 4th-and-3 at the Raiders 39 with three minutes left in the half, Griffin was sacked by Charles Woodson on a safety blitz that not only stopped the drive, but put pushed the Redskins out of field goal range. This was the second straight drive that ended before its time. Going into the half down 10-14, the team had successfully changed the tide of the game even without the points. Raiders went into the half with their starting offensive backfield, running back Darren McFadden and Pro Bowl fullback Marcel Reece, sidelined with injury and their back-up quarterback playing like a backup quarterback. If the Woodson doesn’t make the sack on Griffin, the team would have been going into halftime either tied or behind. 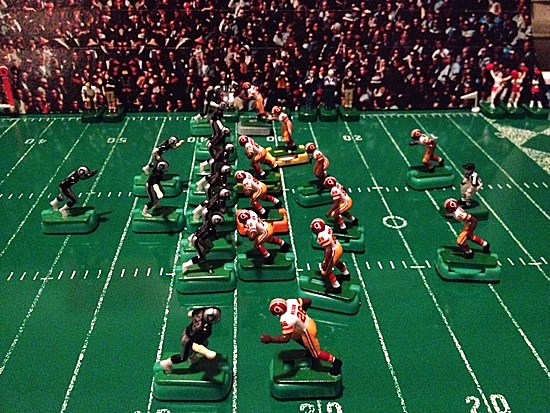 The Redskins start the 2nd half on defense behind 14-10.

A constant struggle, a ceaseless battle to bring success from inhospitable surroundings, is the price of all great achievements.Orison Swett Marden

The third quarter started off ugly. After the Raiders 2nd 3-and-out, Robert Griffin connected with tight end Logan Paulsen on a 3rd-and-9 deep in their own territory. Logan is stripped of the ball after the catch and the fumble is recovered by the Raiders on the Redskins 42. Like Griffin’s fumble run in last week’s loss to the Lions, the play was systematic of the team’s annoying habit of making it easier for the other team to beat them. It was on the defense to not let the Raiders take advantage of the turnover.

And that they did. They held the Raiders, and my favorite Polish-born American football placekicker Sebastian Janikowski missed a 52-yard field goal wide left. Unlike previous turnovers this season, the Skins came out unscathed by what could have been a very costly mistake.

And on their next offensive series, they made sure that the Raiders were the ones to suffer the consequences of failed opportunities. 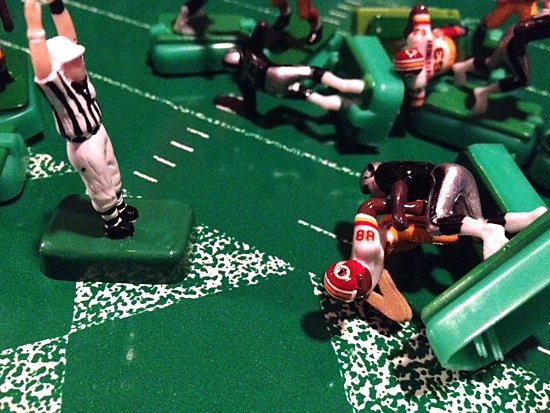 Pierre Garcon 5-yard TD pass from Robert Griffin capped a 8-play, 48-yard drive that gave the Redskins their first second half lead of the season with 2:58 left in the 3rd quarter.

The offense scored their first touchdown of the day late in the 3rd quarter. Alfred Morris had 29 of his 71 rushing yards of the day on the drive. After a crucial 17-yard catch-and-run by Leonard Hankerson on third down put the Skins on the Raiders 12, Morris injured his ribs on the next play and did not return to the game. The drive ended two plays later with Pierre Garcon’s 5-yard touchdown catch from Griffin.

With the score, the defense could do something they haven’t had the luxury of doing all year: Play the second half with a lead. 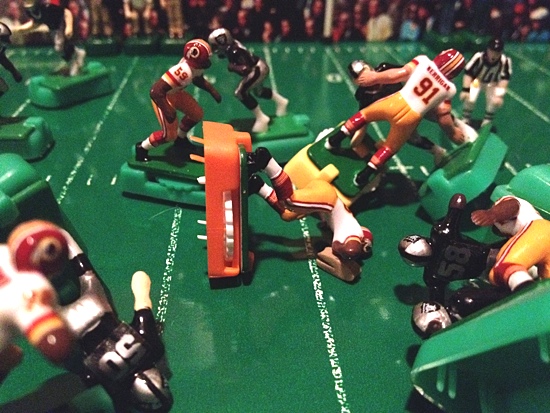 Ryan Keirrigan continued his pro-bowl play this year. In the 4th quarter, he caused Matt Floyd to fumble and the ball was recovered by the Redskins at midfield. For a unit that has been ridiculed for their play, the defense kept the team in the game. They sacked Flynn seven times, caused two turnovers, and scored as many touchdowns as the Raiders offense did (one). For the first time all season, they dominated a team.

The offensive did the rest. 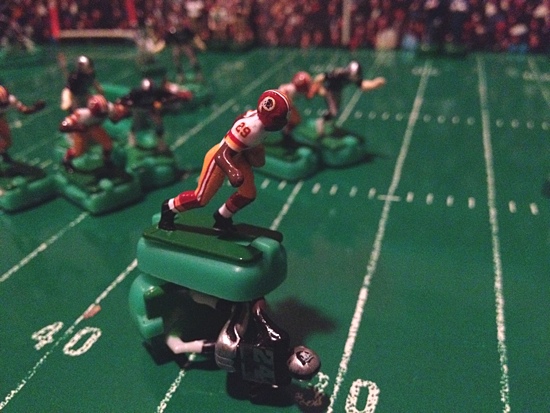 Roy Helu Jr.’s hurdles a defender after catching a pass from quarterback Robert Griffin III for a 28-yard gain.

All it took was two Roy Helu Jr. touches to put the game out of reach. The first, a dazzling catch and run, was an instant classic with Helu hurdling a hapless Oakland defender to put the Redskins on the Raiders 14. On the next, he bobbed and weaved the final 14 for the game’s final score. With Morris out of the game, Helu contributed 84 total yards (41 rushing , 43 receiving) and the game’s clenching touchdown. 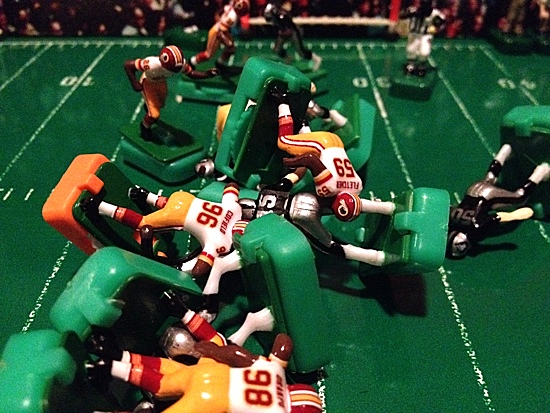 The defense stops Oakland on 4th-and-1 to secure the Redskins first victory of the season with 3:23 left in the 4th.

With the win, the Skins finally got their first “W” of the season. It came against a weak team playing with a back-up quarterback, but in the NFL, it doesn’t matter who you beat: all that matters is that you beat them. At 1-3, their dismal September is behind them. They go into their bye week on a high note before they travel to Dallas to play the Cowboys on October 13th. Despite their sluggish start, the NFL East remains wide open. The Cowboys, Eagles, and the hapless Giants all lost yesterday, and a win at Dallas will put the Skins one game out of first place in the division.