Redskins vs. Packers: Limp in Lambeau

Another listless effort by the Burgundy & Gold. Nothing is so fatal to religion as indifference. Edmund Burke

I was psyched for yesterday’s game. After catching last week’s Monday night loss to the Eagles in pieces, I didn’t have any prior commitments to interfere with my football viewing. The wife and kid were at the RVA Street Art Festival, so I had the house all to myself. It was primed to be a banner day all right; all that needed to happen was for the Redskins to beat the Packers and it would have been a perfect day. 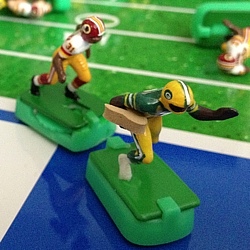 Jemichael Finley caps a 6-play, 90-yard drive with a 3-yard touchdown pass from Aaron Rodgers that made the score 24-0 going into halftime.

For the second week in a row, the Redskins stunk up the field. They played befuddled ball, bumbling and stumbling around Lambeau with the structural integrity and grace of a three-legged table. They were beaten in every facet of the game. It wasn’t even close. It got so bad, I stopped screaming profanities after the Packers went up 17-0 with 11:40 left in the second quarter. By the time Rodgers threw his third touchdown of the half (a leisurely 3-yard toss to Jermichael Finley to make the score 24-0 after a Mason Crosby extra point) a few minutes later, I was laughing. It was a dismissive sort of cackle too, a mocking giggle uttered in indifference.

I spent the second half switching between the Packers making the Redskins look silly and NFL Red (Crack) Zone. I saw some of the garbage time, second half points, but I cared more about how my fantasy teams were doing than watching the lost cause. 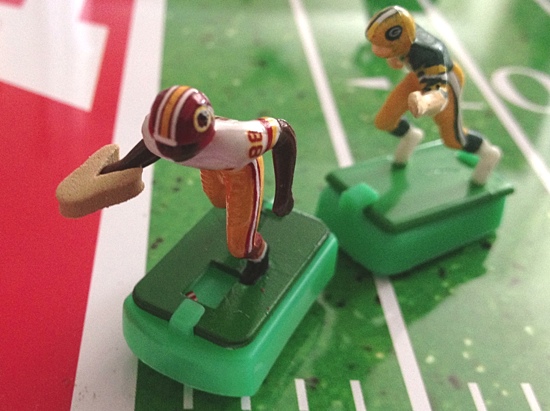 Pierre Garcon finally puts the Skins on the board with a tip-toe, 6-yard pass from Robert Griffin in mid-3rd quarter action. He finished the day with eight receptions for 144 yards.

It may be only the second game of the year, but given the breathtaking ineptitude they’ve displayed so far (they’ve given up 1,023 yards in eight quarters of play), it’s looking like the Skins will not only be a bad team, they could be one of the worst in the NFL.

Let’s look at the one thing they’ve proven themselves to be good at: making the other team look great.

At the end of 2012-13 season, the Redskins were ranked fifth in total defense. Two games into the new season, they have transformed themselves into the number one enablers in the league. 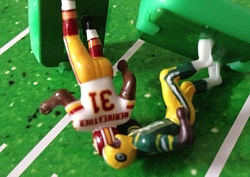 Sunday’s game marked the fifth failed comeback attempt for Brandon Meriweather, a former two-time Pro Bowl player the Redskins signed as a free agent in 2012. He left the game with a concussion after he tried to tackled Packers running back James Starks along the Green Bay sideline 10 seconds into the 2nd quarter. In 19 games since he signed (including the playoffs) Meriweather has only played three quarters of actual football for the Skins.

Quarterback Aaron Rodgers went 34-of-42 for four touchdowns and no picks in yesterday’s 38-20 dismantling of the Redskins. His 480 passing yards tied a franchise record set by former teammate and current Oakland Raiders’ bench warmer Matt Flynn on Jan. 1, 2012, against the Lions. Backup running back James Starks had an all-pro game as well. He ran 20 times for 132 yards and a touchdown becoming the first Packers running back to run for more than a 100 yards since 2010 when Brandon Graham ran for 115 yards in an overtime loss to—survey says: the Washington Redskins. With those two performances, The Packers became first team in NFL history to have a QB throw for 450-plus yards and have a player rush for 125-plus yards in the same game.

There is no ghost so difficult to lay as the ghost of an injury. Alexander Smith 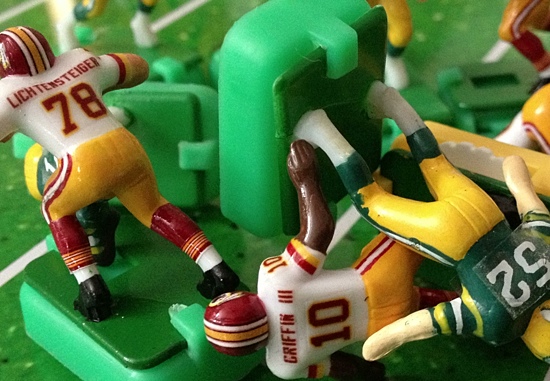 Robert Griffin getting hit by Linebacker Clay Mathews in the second quarter.

In (violent) contrast, Griffin completed only six of 13 first-half passes and threw incompletions on all but one lone third-down play that came up short. 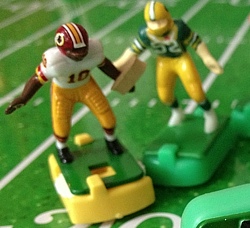 Robert Griffin III ran four times for total of a single yard in yesterday’s thrashing by the Green Bay Packers.

His final numbers for the day look impressive on paper (26-0f-40 for 320 yards, three touchdowns, and a pick), but he is simply not the player he was last year. Gone is the bold confidence and element of surprise; he plays now like a player trying to protect an injury. It’s not as bad as watching Patrick Ramsey twitching shell shocked in Steve Spurrier’s it-doesn’t matter-if-the-quarterback-dies offensive, but despite what he may say, it looks to me as if RGIII is having a crisis of faith out there. And after seeing what we’ve seen so far, not having Kurt Cousins start the season under center may very well prove to be the blunder of the season.

I know that would not have been the popular thing to do, but considering the severity of the injury to the knee he’d already injured in college, the money invested in him, and Kurt Cousins’s abilities, it’s looking more and more like that would have been the right thing to do. 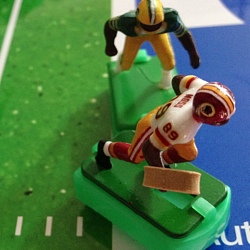 Griffin connects with Santana Moss for his third touchdown of the game late in the 4th.

Even if the team lost their first two games with Cousins at the helm, it would have given Griffin that much more time to heal and reacquaint himself with the game. Is it too early to tell if starting him was the wrong thing to do? Mercifully, yes. With the Cowboys, Eagles, and Giants all losing yesterday, the NFC East is looking like a toss up once again, so if Mr. 3’s knee is indeed fine (doubtful) and the team can string together some wins, they have as good a chance as anyone to take the division or wild card spot.

Faith is the great cop-out, the great excuse to evade the need to think and evaluate evidence. Faith is belief in spite of, even perhaps because of, the lack of evidence. Richard Dawkins 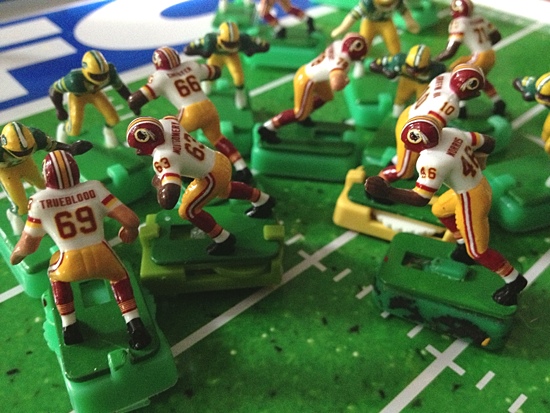 Alfred Morris had 120 yards (107 rushing, 13 yards receiving and no fumbles) of total offense in a losing effort.

Hope is not lost, but let’s be frank: the team has yet to give us any meaningful reason (other than the odd Ryan Kerrigan moment) to be hopeful. At this point in the season anyway, believing the Skins will turn things around against the Lions (who lost a heartbreaker to the Cardinals 25-21) next week is belief based entirely in faith.

The data does not support the desired conclusion.