The team plays better, but the result is the same. The Redskins lose to the Lions 27-20. This law represents a cornerstone in a structure which is being built but is by no means complete. It is a structure intended to lessen the force of possible future depressions. It will act as a protection to future Administrations against the necessity of going deeply into debt to furnish relief to the needy. The law will flatten out the peaks and valleys of deflation and of inflation. It is, in short, a law that will take care of human needs and at the same time provide for the United States an economic structure of vastly greater soundness. From Franklin Roosevelt’s statement on signing the Social Security Act August 14, 1935

Two months after FDR signed the Social Security Act in 1935, the Lions beat the Redskins. Since that 17–7, October 13, 1935 victory over the Boston Redskins at Fenway Park (then-owner George Preston Marshall moved the team to Washington two years later), Detroit lost the next 21 times they had to play the team on their home turf.

Despite ending what was the second longest streak in the NFL (The Lions 22-game losing streak in Lambeau being the first), it wasn’t all bad for the Redskins yesterday: it wasn’t a total blow out. Unlike previous weeks, the game was always within in reach. This is the team that I fell in love with last year during their 3-6 start. Despite all the missed tackles, dropped balls, penalties, and turnovers, you could see that they were getting better. No doubt losing sucks, but I’ll take that type of loss–a loss by a very young team slowly but surely becoming a better team.

Still, 0-3 is 0-3, and their once-promising season could already be over. 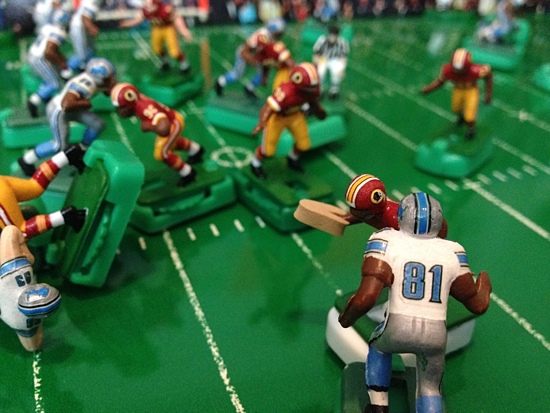 DeAngelo Hall’s 17-yard interception return made the score 6-0 early in the first quarter. It would be the Redskins’ only lead of the game.

After a century of striving, after a year of debate, after a historic vote, health care reform is no longer an unmet promise. It is the law of the land. Barack Obama at signing of The Patient Protection and Affordable Care Act (PPACA) March 23, 2010

Things started off promising enough. On the Lions’ first play from scrimmage, London Fletcher sacked Matt Stafford for a 7-yard loss. They got the Lions off the field. After the first Redskins drive fizzled on their own 49, DeAngelo Hall took a pass intended for Calvin Johnson to the house. His second pick six of the year, the play put the Skins on the board first, and momentum was on their side. The crowd at FedEx was behind them, they had the lead, and the team, fired up by Hall’s interception, seemed primed to right the wrongs of the year’s previous outings.

I went to a bookstore and asked the saleswoman, ‘Where’s the self-help section?’ She said if she told me, it would defeat the purpose.George Carlin 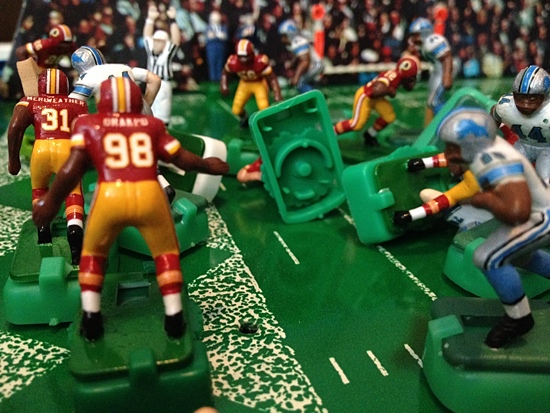 After that promising start, Matt Stafford led the Lions on a leisurely 8-play, 48-yard touchdown drive. Joique Bell, filling in for an injured Reggie Bush, broke three tackles on his 12-yard TD run. And that was one of themes of the day: missed tackles. The Redskins seem to have forgotten how to do it. And after another 3-and out for the Skins, they let the Lions do it again. 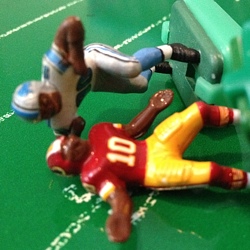 Enabled by poor Redskins tackling and costly penalties on successive 3rd downs, the Lions took the ball from their own 8-yard line and marched down the field for another touchdown. The secondary gave up 55 yards on three straight Stafford passes.

That’s an ugly trend. They held the Lions to 63 yards on the ground, but they gave up 378 yards in the air. 201 of the Lions’ 441 yards came on just six plays (through three games, the Redskins have given up 10 plays of 30 yards or more and 1,464 of total offense). Receivers were wide open. Nate Burleson and and Calvin Johnson made mince meat of the secondary, and both went over the century mark in receiving for the day (Burleson 116 yards; Johnson 115 yards and a touchdown). 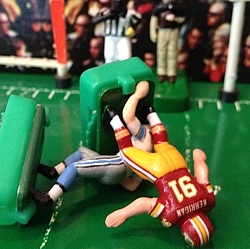 Ryan Kerrigan stops tight end Tony Scheffler on 3rd and 1 for a 1-yard loss to force the Lions into a 3-and-out following the interception.

After Fauria’s touchdown, the Skins put together a good looking drive. Starting form their own 20, Griffin moved the team confidently down the field with a mix of passes and runs. On 1st and 10 on the Lions 19, an ill-advised pass from Griffin to Pierre Garcon was intercepted by Chris Houston. The Redskins defense forced the Lions into a 3-and-out following the turnover. Back on the field, Griffin led the offense on a 7-play, 71 yard drive that culminated with Alfred Morris’s 30-yard touchdown run to tie the score up at 14. 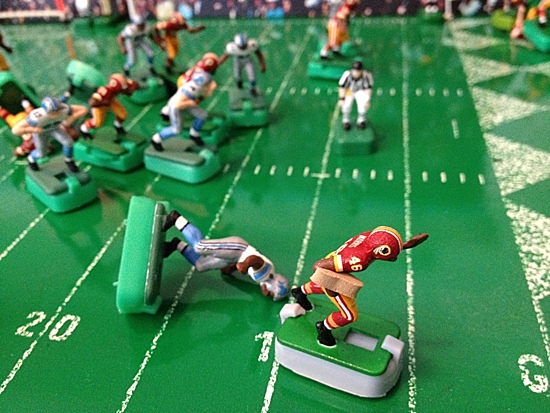 Following Morris’s touchdown, the defense went soft and allowed the Lions to get a field goal to make the score 17-14 at the half. After two quarters of play, the Skins were down by 3 (their lowest margin of the year), Griffin seemed to have the offense clicking and they looked like they might get their first win of the season.

I love the irony. I’m perceived as being really young and yet I have the clinical condition of an old man. Michael J. Fox 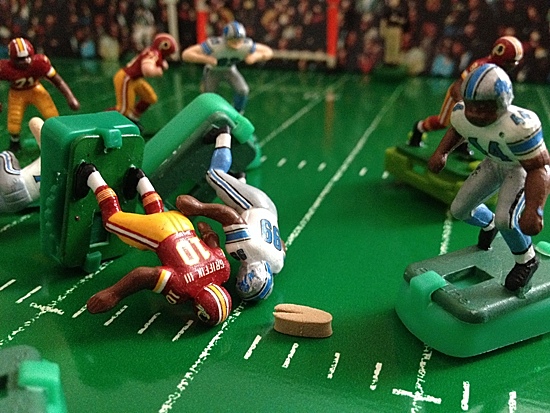 Robert Griffin’s 21-yard run ends with a fumble on the Lions’ 29 early in the 4th quarter. His 2nd turnover of the day would prove costly for the Redskins.

The Redskins took the opening drive of the 3rd quarter down the field and tied the score at 17 on a 43-yard field goal by John Potter (who was filling in for the injured Kai Forbath for the 2nd straight week). After that, the quarter was a back and forth affair. In one of the biggest plays of the game, early in the 4th quarter, on 1st and 10, Griffin broke out of the pocket with speed, made people miss, and showed why he is (when healthy) one of the most electrifying players in the NFL. It was his first real exciting moment of the year, the one everybody has been waiting for. It was the one play this year he truly looked like he was back.

And then, as he concluded the run with an ugly and awkward, head-first slide, the ball popped out and was recovered by the Lions. If he had slid feet first and the ball popped out when he hit the ground, the play would have been called dead, but because he went head-first, it was a fumble. That was the second most deflating moment of the game. The most deflating moment would come on their next offensive series 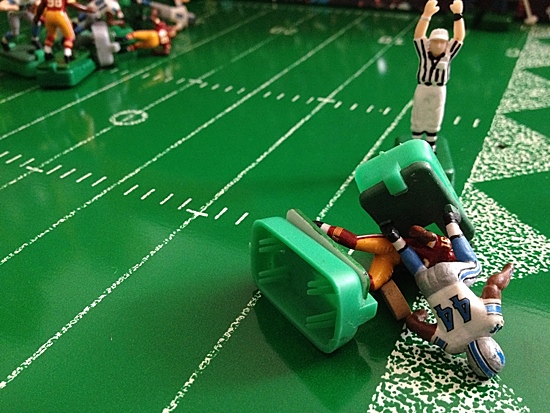 Aldrick Robinson’s touchdown catch was overturned by an instant-replay review.

Empowered by their good fortune, the Lions took the ball and put three points on the board to go ahead for good. On their next drive after the fumble, Griffin would again be foiled on the cusp of success. On 1st and 10, he let lose a beautiful 57-yard bomb to a streaking Aldrick Robinson. The play was initially called and a touchdown, but after review, it was ruled that Robinson had failed to maintain possession of the ball as he tumbled to the turf in the end zone. The team didn’t recover from that bummer.

The Lions put the game out of reach with Calvin Johnson’s 11-yard touchdown pass on their ensuing drive, but this is the play when the Redskins lost the game. 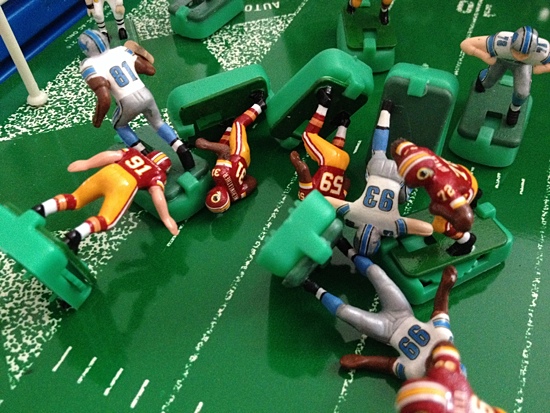 There is no better than adversity. Every defeat, every heartbreak, every loss, contains its own seed, its own lesson on how to improve your performance the next time. Malcolm X

The best the Redskins can hope for is a 1-3 September. In order to do that, they’ll have to win next week in Oakland with a defense ranked worst in the league and second worst in points (32.7) allowed (floundering divisional revivals the Giants are the worst giving up an average of 38.3 points a contest). The Raiders aren’t particularly scary, but when you haven’t won a game, nobody is all that scared of the Redskins either. Griffin and the offensive are getting better, and as bad as the defense was on Sunday, they did play well enough to keep the team in yesterday’s game. What’s missing from the defense is their ability to create turnovers. Last year, the Redskins were plus-17 in the turnover differential. It was a big part of their success. This year, they’re minus-2 through the first three games. Without that big play ability, all the missed tackles and blown coverage’s really hurt.

Also hurting this year’s team is that they aren’t running the ball. In order to run that offense, you need to be able to run and pass. Blowout losses kept them from running the ball, but if they are to succeed, Alfred Morris needs to touch the ball a minimum of 20 times a game (something he has yet to do this year). As much as the offense needs Griffin to succeed, it needs Morris and the running game to keep defenses from keying in on him. They were able to run the ball yesterday (Griffin, Morris, and Garcon ran for a combined 120 yards) and it showed. If they can continue to run the ball and stop the turnovers, their fortunes should improve.

At 0-3, they should get better, because it can’t get much worse.