Redskins vs. Giants: The 2014-15 offseason has officially begun

With consecutive losses to the 49ers and Giants, the Redskins are out of playoff contention. I don’t have high expectations anymore. Maybe they’ve just been beaten out of me.Elisabeth Shue

Of many of beat downs I have witnessed at Fedex over the years, last Monday night’s was by far the worst. To call what happened between the 49ers and Redskins a “game” is to suggest that actual competition took place. That did not happen. It wasn’t a game; it was annihilation. 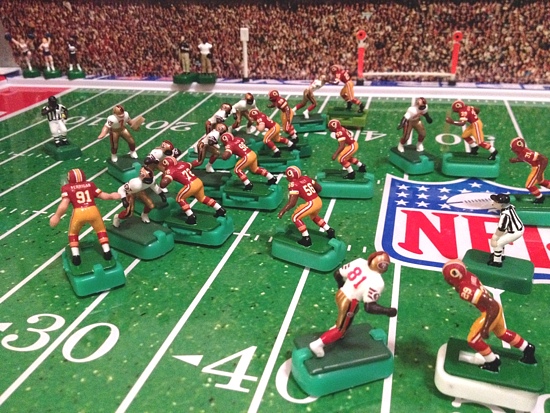 Colin Kaepernick completed 6-of-9 passes to five different receivers on play action last Monday night against Washington. He finished the game 15-24 for 235 yards and three touchdowns in the 49ers’ 27-6 drubbing of the Skins.

I did have a cushy free ride to and from the slaughter in a chauffeur-driven bus, but it was still a great big giant bummer. That’s why I hate going to the games. Only if the Skins win do I have a good time, and even then I would rather be at home no matter how much my ass is pampered. And at home when they lose, I can get over it quickly, but when I go to the games and they lose, it sucks so much I can barely stand it.

And boy, did it suck. 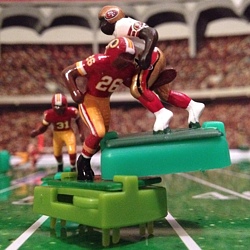 Last Monday’s game was Anquan Boldin’s first game with multiple touchdown catches since Week 14 of 2012. Here he catches a 32-yard pass from Kaepernick over Josh Wilson in the 3rd quarter. Boldin ended the day with five receptions for 94 yards and two touchdowns.

The Skins were crippled from the onset. All day, the four of us that went up to the game tried to muster some hope, but we knew we were just kidding ourselves. Still, we did our part. We sacrificed 10 hours of our day, we wore our colors proudly, and we screamed, yelled, and cursed when we were supposed to. It didn’t matter. The Redskins were simply outmatched. Making matters worse, as we sat there watching the carnage unfold, we had to endure the play-by-play by various Niners’ fans sitting around us. One in particular–a rail-thin, short, drunken dude with a toothy grin–just kept talking and talking and talking.

“Yo, yo, yo, the Redskins ain’t shit man. It’s like taking candy from a baby out there.”

I couldn’t argue with him.

Again, I couldn’t argue. He did look hurt. And if he wasn’t hurt going into the game, it looked like he would be after it. He was taking a lot of punishment.

“But who cares about him? Kaepernick is da man, motherfuckers!” he said with a high-pitched whine as he high-fived the cluster of Niner’s fans sitting around him,

“Shit. This game ain’t even fun to watch.” 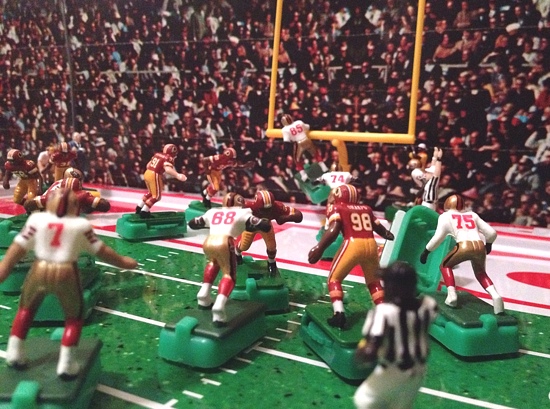 Tight end Vernon Davis celebrates his 1-yard touchdown catch from Kaepernick that gave the Niners a 24-6 lead late in the 3rd quarter.

It wasn’t. And after Vernon Davis’s touchdown made the score 24-6 late in the 3rd quarter, I decided to stop watching it and went to the bar to get a drink. I ordered two shots of Maker’s Mark.

“Really? 26 bucks for two shots of whisky?” I don’t know why I was surprised, but looking at the two minuscule shots she had laid out on the counter, I couldn’t help myself.

“Yeah baby, its 26 dollars,” the kindly, overweight, black woman with bad
teeth replied. She seemed embarrassed. “Ever since they raised the prices this year, I don’t get tipped as much. Everybody is mad about it.”

As I paid her, the apology continued.

“Make sure Daniel Snyder doesn’t get any of that”

“You don’t have to worry about that, baby,” she giggled slipping the four one dollar bills quickly into her bright pink bra, “God bless you, honey, God bless you.” 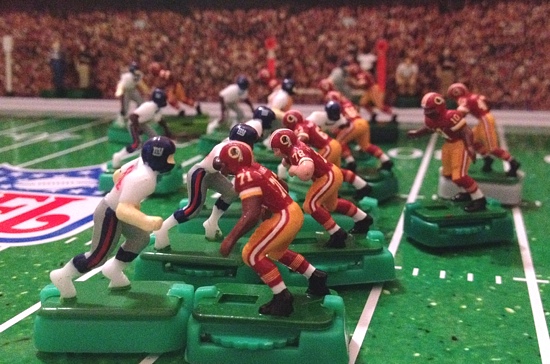 Because I want to see. I’ve got to know what’s going to happen while I’m still enough in control to be able to do something about it. Daniel Keyes Flowers for Algernon

Despite being shellacked by the Niners just six days before, I liked the Redskins’ chances against the Giants. Like the Skins, the Giants are a bad team having a miserable season. After a 0-6 start, the Giants had managed to put some wins together, but after last week’s loss to the Cowboys, their playoff goose was pretty much cooked. Amazingly though, even as bad as both teams have played this year, both still had a glimmer of hope of making the post season if they won Sunday night’s game. Lose it and the season is over. 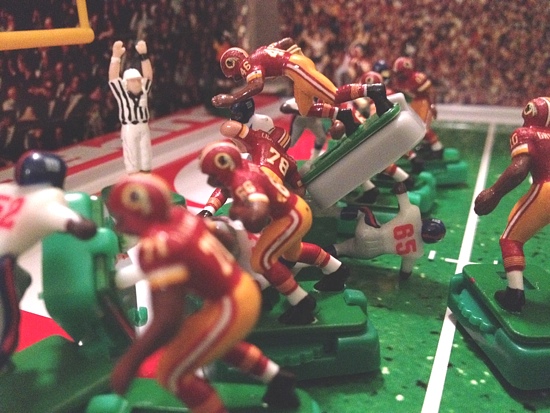 Alfred Morris’s 1-yard touchdown gave the Skins a 7-0 lead over the Giants in the 1st quarter.

Going into the game with the number one rushing offense in the league, I figured the Redskins had the upper hand. And on their first drive of the game, they did. They drove down the field and scored their first TD of the year on an opening offensive drive. It was a 15-play, 73-yard thing of beauty too. Griffin connected on all five of his passes, and he and Alfred Morris ran the ball well in the no huddle offense. At the end of the first quarter, the Redskins were up 7-0 and the Giants had amassed a total of five yards on six plays. 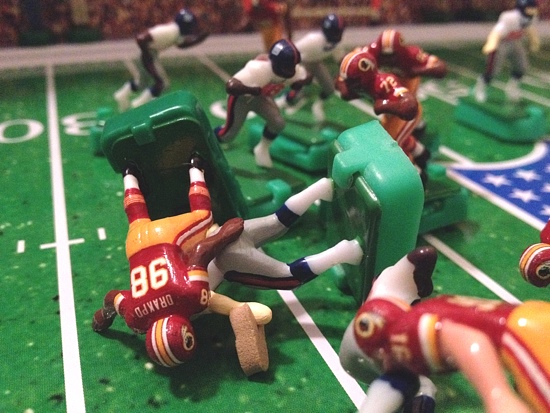 Brian Orakpo sacks Eli Manning on the Giants first offensive play of the game for a nine yard loss.

And then they did it again. Culminating with Logan Paulsen’s 18-yard touchdown catch, the 8-play, 59-yard drive put the Skins up 14-0 early in the second quarter. Sav Rocca and the special teams pinned the Giants on their own 1-yard line, the defense forced a 3-and out, and the offense put six on the board. They were dominating the Giants like the Niners had dominated them. They were playing like the team they were supposed to be and not the 3-8 team that they were. 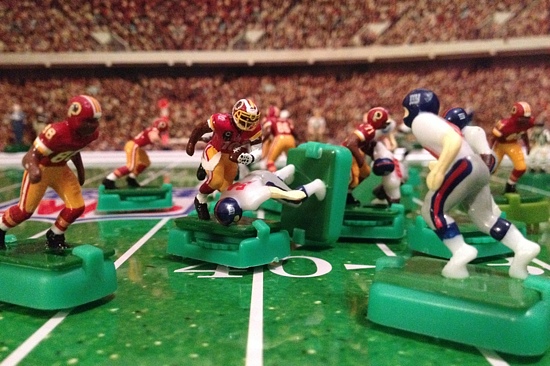 Robert Griffin runs for 15 yards on the Redskins scoring drive in the 2nd quarter.

That’s when it all went to shit.

The fucked up thing about it is that I wasn’t surprised. I expected it. Up by 14 is prime time for a Redskins failure, and sure enough, that’s what they did. After Paulsen’s touchdown, the Giants scored twice in the second quarter to tie the score at 14 going into half time. I knew it when tight end Brandon Myers scored on 22-yard pass from Manning to tie the score with 35 seconds before the half: the Redskins were going to lose this game. 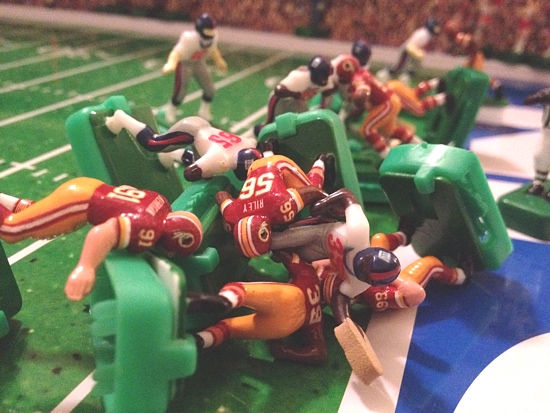 Andre Brown’s 23-yard touchdown run made the score 7-14 Redskins with 8:46 left in the 2nd quarter

I don’t know what happens to them. Moments of dominance are followed by long descents into incompetence. They can’t sustain drives when they need to, they can’t stop anybody when they need to, and the special teams can always be counted on to make a critical mistake. It’s a recipe for failure. Worse still, the Giants tried to lose the game. Brandon Meriweather intercepted Manning and returned the ball to the Giants 12-yard line. The Skins had three shots to get six and had to settle for three. That was a pivotal series. If they get the touchdown, it changes the course of the game. Forcing the Skins to settle for three gave the Giants room to breathe.

The Giants scored the last 10 points of the game. As is their nature, the Skins fucked up on special teams when Sav Rocca fumbled the snap from center and whiffed an 18-yard punt that gave the Giants the ball on the Redskins 46 yard line. Four plays later, Andre Brown scored to put the Giants ahead 21-17 after Josh Brown’s extra point. 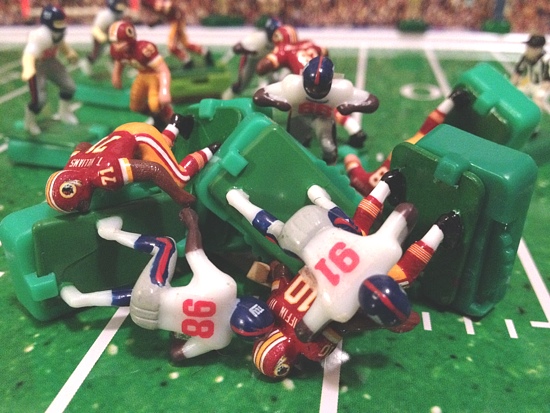 Justin Tuck sacked Griffin four of the five times the Giants got the Redskins quarterback in the 2nd half.

The Redskins had plenty of time to get back into the game but they couldn’t stop Justin Tuck. The defensive end almost single-handedly beat the Skins. He sacked Griffin four times and each of them came at critical moments. It was a career high for the two-time Super Bowl champion, and the Skins had no answer for him. When Griffin did have time to throw the ball, Paulsen and Pierre Garcon dropped easy passes. A lot will be made about the poor officiating at the end of the game (Washington thought it had a first down when it was actually third-and-1), but that doesn’t change how poorly the offensive played in the second half. When Will Hill wrestled the ball away from Pierre Garcon on 4th-and-1 with 1:21 remaining in the game, the Redskins off-season had officially begun 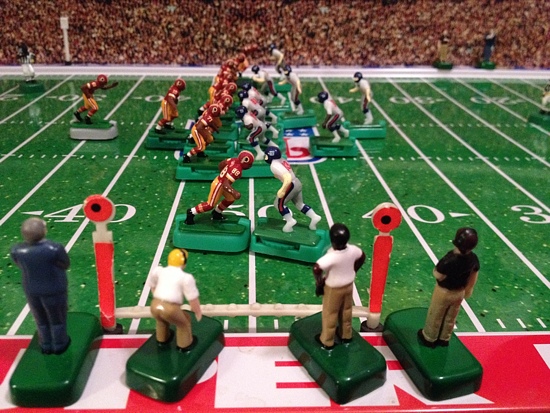 For time and the world do not stand still. Change is the law of life. And those who look only to the past or the present are certain to miss the future. John F. Kennedy

At 3-9, everything about the Skins will be securitized, questioned, and second-guessed. Personally, I think the team is fine. Are there problems? Yes, lots of them, but that doesn’t mean that you have to do anything as rash as firing Mike Shanahan as I’ve heard some people say. Firing him now would be stupid. I wouldn’t fire Kyle either. All of the people calling for his head were the same people calling him a genius last year, and just because you have a disappointing season with a very young and very promising team doesn’t mean the Skins should freak out and get rid of him. You give coaches three years and next year will be the then fully healed Mr. 3’s third in the Shanahan system. That will be the make or break year. If next season doesn’t show results, then you think about firing the Shanahans–but not now, not after what they’ve been able to assemble. If they get some good linemen and have a little luck, the Shanahan offensive could be deadly.

And keep Kirk Cousins on the bench. Robert Griffin is the Redskins quarterback. End of story.

Defensive coordinator Jim Haslett should be fired immediately, though. I bet he already has his bags backed. Thankfully, whomever Allen and Shanahan get to run the defense after Haslett is canned won’t be starting from scratch. There are pieces there to build on. With the right coach and a few key additions in free agency (something they couldn’t do going into the year), the defense should improve. The nice part about that is when you are ranked 31st in the league in overall defense, there is no place to go other than up.

Until then, the Redskins have four more games to play against the Chiefs, Falcons, Cowboys, and Giants until their 2013 season is over. It will interesting to see how these games play out because how they play in these next 16 quarters will tell you who will be in burgundy and gold next year and who will not. Think of them as the pre, pre-season for 2014-15 season, the year the Redskins go to the Super Bowl.

Remember, you heard it here first.