Redskins vs. Falcons: The Blunder Bowl

The Falcons beat the Redskins 27-26 in the most exciting meaningless game of the day. Every man’s life ends the same way. It is only the details of how he lived and how he died that distinguish one man from another. Ernest Hemingway

The big news leading up to the game was the announcement that Kirk Cousins would be replacing Robert Griffin as the Redskins’ starting quarterback. Shanahan’s reason for the change was that he didn’t want Griffin to take any more hits in a season that’s already over. With three games left, it’s hard to disagree with his decision. The only thing surprising about it is that it came during a week that everyone (including myself) was sure that Shanahan would be fired. It’s still a possibility, but Mike Shanahan spent the week telling everybody that he wants to be the head coach of the Washington Redskins next year, so who knows?

I’m not privy to what goes on behind closed doors in Snyderland, but I do hope Shanahan stays. He got us Alfred Morris, Jordan Reed, David Amerson, and Kirk Cousins–and despite this dismal season, the team is the 2nd-ranked rushing offense in the league. The whole system doesn’t need to be flushed. With new defensive and special teams coordinators, a couple of free agents and draft picks, and, most importantly, a healthy RG3, the Skins could/should be good. It will be interesting to see how Cousins does in these last games and what the Redskins decide do with him. He’s under contract, but with such parity at the position around the league, someone is going to make the Skin’s an offer they can’t refuse no matter how he plays. When that happens (and it will), the Redskins will have three options: keep Cousins as insurance for Griffin, trade him for the picks they gave up to get their benched star, or (and this is the least likely scenario) trade Mr. 3 and keep the promising backup. No matter what happens, Shanahan’s decision to draft Cousins has proven to be a wise choice. For that alone, I believe he should be given another year.

All that will have to wait though. The current season isn’t over yet. 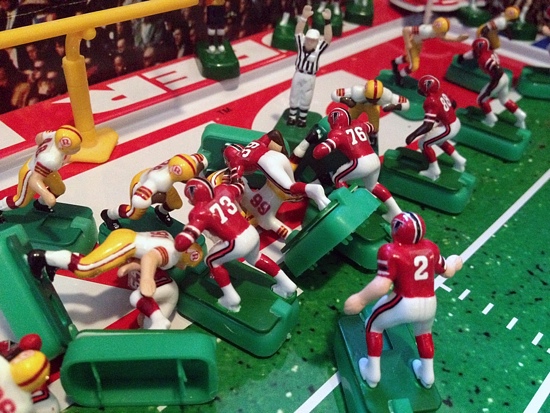 For a meaningless game, yesterday’s match-up of 3-and-10s was pretty entertaining. It was an ugly contest (nine total turnovers) between evenly matched bad teams, but it was full of action, and it went down to the wire. And that’s all I want when I watch football: a battle between equals.

It didn’t start off that way, though. It looked like the Falcons were going to blow the Skins out, scoring effortlessly on their first two offensive possessions. When Steven Jackson scored on the Falcons’ opening 14-play, 83-yard drive, I wasn’t surprised. How can you be when you allow the opposing team to convert on three straight 3rd downs? And besides, the Redskins like to spot the other team a couple of first-quarter touchdowns so it makes it easier for the team to beat them. It’s what they do and they do it well. And to prove it, they let the Falcons score again. Matt Ryan hooked up with future Hall of Famer Tony Gonzalez for a 13-yard touchdown after Cousins’s first series of the season as the Redskins’ starting quarterback ended when he fumbled after being sacked by Osi Umenyiora. Down 14-0 with almost four minutes left in the 1st quarter, the game was looking like your typical, run-of-the-mill Redskins’ blowout.

And then, despite their need to beat themselves, they rallied back. 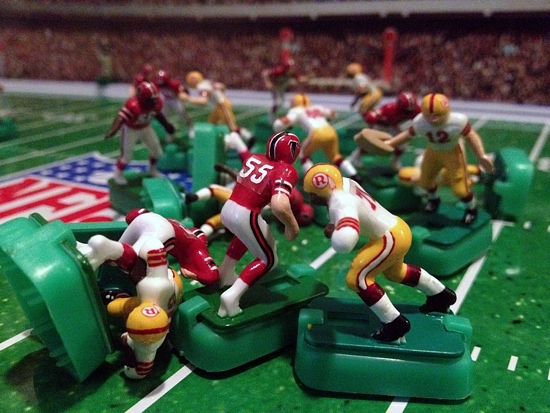 Down 14-0, Kirk Cousins drops back to pass on 3rd-and-3 on the Washington 27-yard line. They would score three plays later when he connected with tight end Fred Davis for a 23-yard touchdown.

Cousins threw for 248 yards and two touchdowns, and the Skins went into halftime with a 20-17 lead over the Falcons. Despite four turnovers (one each by Cousins and Alfred Morris, two by 13-year veteran Santana Moss), the Skins were still in the game. Pierre Garcon’s 58-yard touchdown catch and run was the team’s longest offensive play of the year. Yesterday’s game was the first time this season the Redskins had two 50-plus-yard completions in a game; against Atlanta, they had two in the first half. The first, a 62-yard catch by Aldrick Robinson, was followed by an unforced fumble by Morris. On the next play, Ryan Kerrigan forced Matt Ryan to fumble and Brian Orakpo recovered the ball for the Skins. On 1st-and-10 at the Atlanta 27, Cousins connected with Moss only to have him turn the ball right back over to the Falcons.

Those three plays sum up the Redskins and Falcon’s seasons as the comedy of errors they have become.

The Falcons started five rookies on defense, including three in the secondary. Watching Cousins rack up the numbers against them, you couldn’t help but wonder if things would have turned out differently for the Skins this year if Cousins had started the season under center. In the 1st half, he played with a poise and confidence that Griffin hasn’t shown all year, and the Skins were dictating policy. It did come against a 3-10 team, but he did look good. Even the defense was playing well. 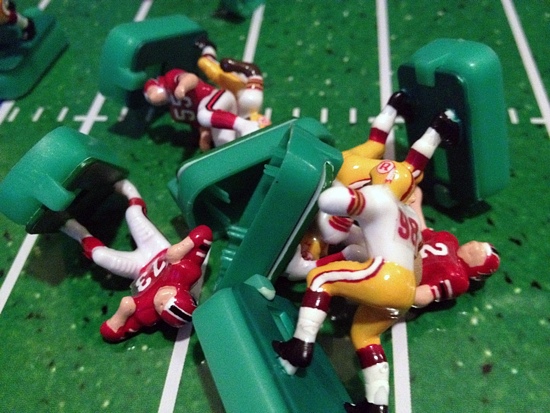 Brian Orkapo sacks Matt Ryan for a 9-yard loss on 3rd-and-4 forcing the Falcons to punt. 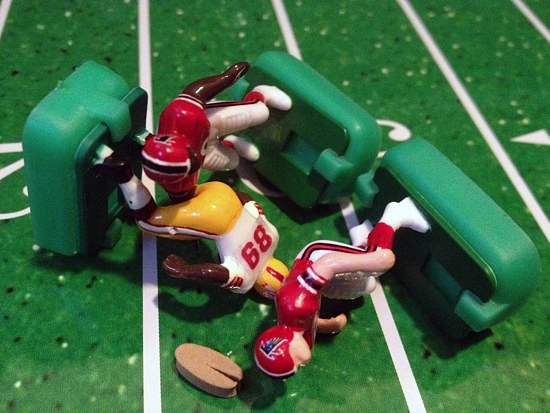 On the ensuing kick, Santana Moss fumbles the ball and Atlanta recovers on Washington’s 14-yard line. The drive stalled on Washington’s 2-yard line, and the Falcons had to settle for a 20-yard field goal by Matt Bryant. 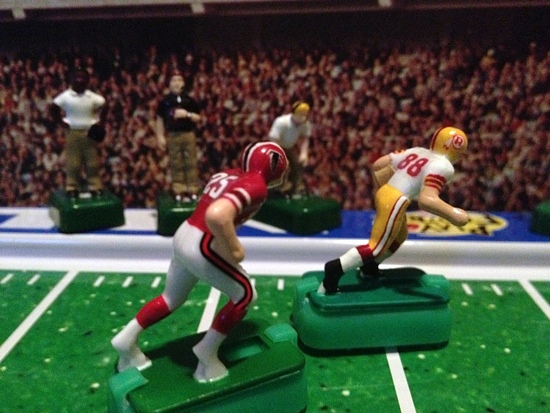 After the Skins’ next drive ends with another Santana Moss fumble, Cousins connects with Pierre Garcon on their following possession for a 58-yard touchdown to make the score 14-17 in the 2nd quarter. The wide receiver finished the day with seven receptions for 129 yards and a touchdown. 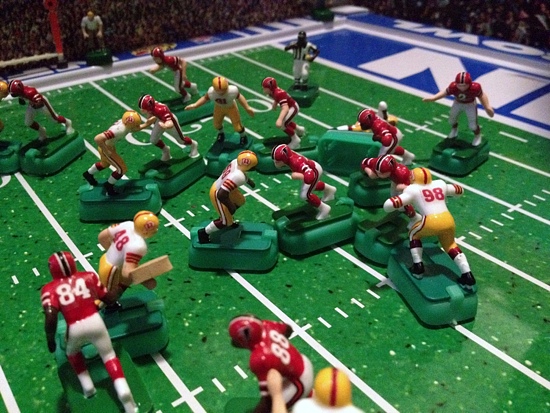 Rookie safety Jose Gumbs’ interception of Matt Ryan’s pass to Harry Douglas set up Kai Forbath’s 37-yard field goal that put the Skins up 20-17 over the Falcons at halftime.

But as with all good things for the Redskins this year, the good times don’t last. 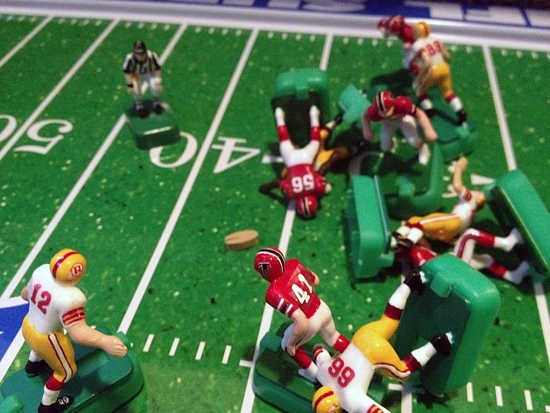 With the Redskins driving early in the 4th quarter, Alfred Morris fumbles the ball for the second time, and the Falcons recover the ball on the their own 14-yard line.

In the second half, the offense disappeared. Their first four drives of the third quarter went like this: three-and-out, interception, three-and-out, three-and-out. They gave up the lead and never got it back. The interception is what killed them. On 1st-and-10 on their own 1-yard line, Cousins was picked off by William Moore, and Steven Jackson got his second touchdown of the day on the next play. That was the play on which the Skins lost the game. With seven turnovers on the day, it speaks to Atlanta’s ineptitude that the game was even close as neither team really deserved to win. It was a game of who would fuck up least, and that’s what the Falcons did. They fucked up least. 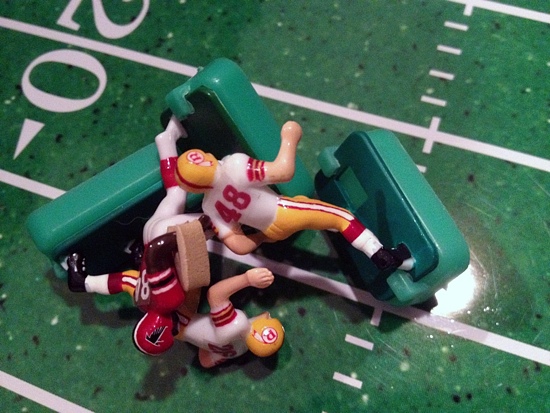 Matt Ryan connects with Rodney White for a 12-yard gain late in the 3rd quarter.

The Skins did make it interesting though. Down by seven with 3:25 left in the game, Cousins led the team on an impressive 13-play, 80-yard drive that ended in a Santana Moss touchdown with 18 seconds left on the clock. All they needed was a successful extra point, and the game would have gone into overtime. Shanahan said fuck it. Why go into overtime when we could just get this thing over with now? I liked the call. Win or lose, it didn’t matter. And so, they went for the 2-point conversation, failed in the attempt, and lost the game.

No big deal. Let the Falcons turd-polish the victory, the Redskins are just practicing for next year. 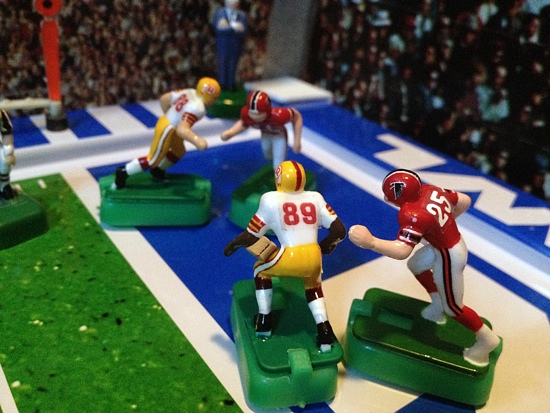 Santana Moss’s touchdown catch put the Skins within a point of the Falcons with 13 seconds left in the game. Shanahan decided to go for the victory with a two-point conversion attempt, but Cousins failed to connect with Garcon, and the Skins lost the game.

Every man has his own destiny: the only imperative is to follow it, to accept it, no matter where it leads him. Henry Miller

That two-point conversation call is why I hope Shanahan comes back next year. Like his benching of Griffin, it showed that he’s thinking of the future of the franchise. Cousins finished the game 29-of-45 for 381 yards, three touchdowns, and two picks. Two more games like that and people are going to be beating down the Redskins’ door to sign him. Playing at home against the Cowboys (who suffered a soul-crushing loss to the Packers on Sunday), the Redskins have a good shot at beating their division rivals if Cousins plays well and the rest of the team can manage not beat themselves. Those are big ifs, but if the Skins do beat Dallas this weekend (it is possible), not only will head coach Jason Garrett be out a job, but Jerry Jones might very well be in the market for a new quarterback.