Redskins vs. Eagles: The not ready for prime time players Expectation is the mother of all frustration.Antonio Banderas

After all the hoopla, hype, and fevered expectation, The Redskins took the field Monday night and laid a great big giant egg on national television. Not only did they play badly, they were bullied and pushed around by a fleet-footed Eagles team that ran circles around them. Add to that the Redskins’ inability to hold onto the ball and you have a recipe ripe for failure. And that’s what happened; as much as Chip Kelly’s Eagles outplayed the team for the majority of the game, the Skins beat themselves with a series of uncharacteristic blunders. When they did finally start playing as they were expected to in the second half, they had dug themselves a hole too big to climb out of. 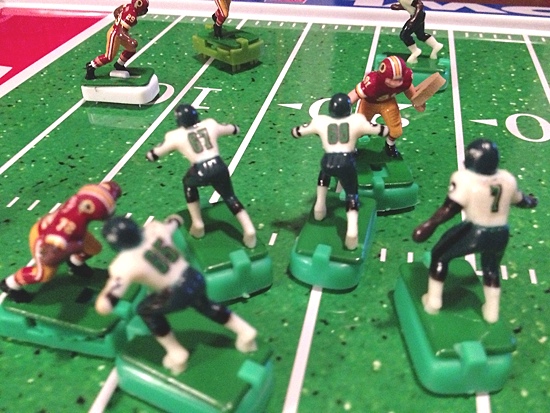 Michael Vick‘s screen pass gets batted down by Ryan Kerrigan and taken 75 yards for a touchdown by DeAngelo Hall, giving the Redskins an early 7-0 lead.

Things did start off promising enough. As I juggled the desire to watch the game with the responsibility of making sure people telling stories about coming out of the closet were heard properly, the first game action I saw was in the Lombardy Market when Ryan Kerrigan knocked down a Michael Vick lateral pass that resulted in the Skins’ first points of the game. Little did I know as I ran back to Balliceaux to look after Secretly Y’all, that was going to be the last cheering I would do for the night.

From there, the wheels came off. Alfred Morris fumbled on the Skins’ first offensive play from scrimmage and followed that blunder with a dropped end zone exchange with Robert Griffin that resulted in a safety. It was ugly. Worse then Morris’s self-inflicted wounds was the team’s first half ineptitude against an aggressive Philadelphia offensive. Though the Skins did manage to apply some pressure on Vick, Philadelphia ran 53 plays and amassed 21 first downs by halftime. 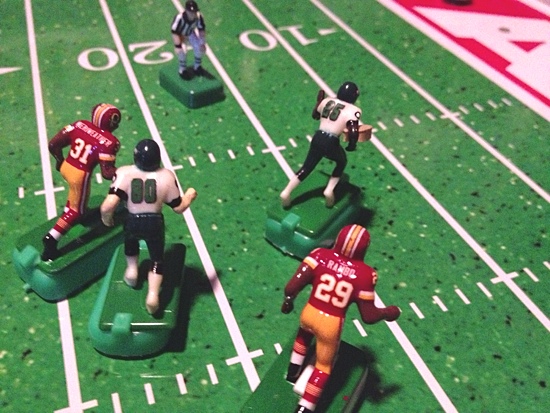 LeSean McCoy ran for 184 yards on 34 carries and a touchdown.

To put that into perspective: the Eagles had as many first downs as the Skins had offensive plays in the first half. As bad as reading that telling stat is, the reality was much worse. During the course of the game’s first 30 minutes, not only was the game lost, the Skins were made to look like boys playing a man’s game. With the height of expectations at a fever pitch for the Skins’ season, their first-half performance was an abysmal failure. 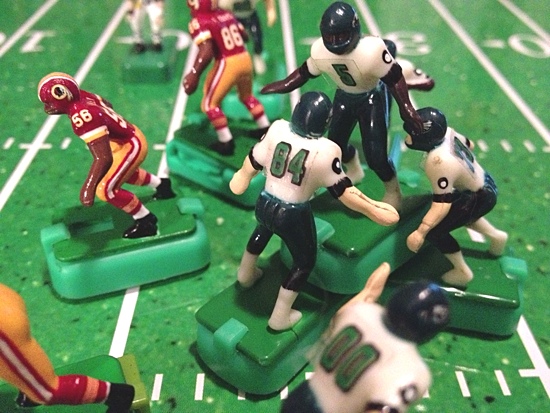 All is not lost, the unconquerable will, and study of revenge, immortal hate, and the courage never to submit or yield.John Milton

As bad as they played in the first half, they did manage to make it a game of it in the second half. Griffin, who started the game playing as if he was drugged, managed to put together some scoring drives. He finished the game going 30-for-49 for 329 yards with two touchdowns and two picks. The defense played better as well. After being initially confused and bewildered by the blitzkrieg pace of the Eagles’ offense, they settled down and surrendered only seven points in game’s last 30 minutes. Some of that had to do with the Eagles taking their foot off the gas, but they did play markedly better. Because of these things, a game that had no business going down to wire, finally ended when the Eagles recovered an onside kick with 1:14 left in the game to secure the 33-27 opening-day victory. 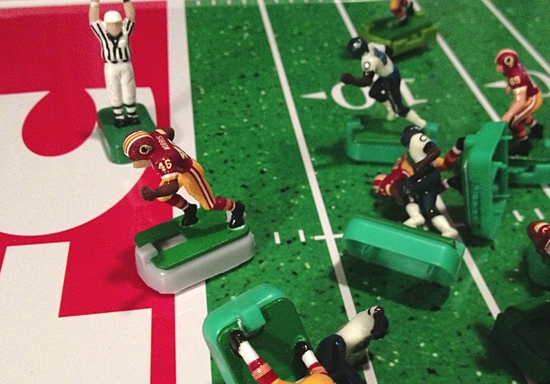 And with that, game one of the Redskins season is in the books. As they prepare for their next game against the Green Bay Packers, fans can take a measure of solace in the fact that they didn’t give up when all looked bleak. It’s a long season. Don’t forget that last year’s dream team started the season 3-6 before their magical run, proving that it’s not about how you start but how you finish. While there are some glaring areas of concern (the porous defense, Kerrigan leaving the game in the fourth quarter with concussion symptoms, DeAngelo Hall’s annoying proclivity for acting like an idiot, Griffin’s knee, etc), the team, as evidenced by their second-half effort, has proven to be resilient, and they have all the tools to be legitimate contenders.

Either way, one things for sure. It’s going to be riveting viewing.