The Cowboys beat the Redskins 31-16 on the strength of their special teams. Every man is more than just himself; he also represents the unique, the very special and always significant and remarkable point at which the world’s phenomena intersect, only once in this way, and never again. Hermann Hesse

You know who the quarterback was who led Tucker High School to a 10-1 record and a Regional 6-AAAA championship in 2005? Dwayne Harris. The same Dwayne Harris who beat the Redskins last night.

In a league that puts a premium on showcasing it’s stars, it was a little-known, 6th round draft pick that was the difference in the game. Even with his stellar performance, the victory was a total team win for Dallas. The Cowboys played the majority of the game without starting running back DeMarco Murray and defensive end DeMarcus Ware and won a game they lost on paper.

They lost the time of procession by almost 10 minutes (25:28-34-32) and gave up 433 yards of total offense, but they forced the Redskins to settle for field goals instead of touchdowns in a game in which they never trailed. Football is a total team sport, and when you can win despite not playing your best game that’s the type of victory that separates good teams from the not-so-good ones. With the win, the Cowboys put last week’s heartbreaking loss to Denver behind them and move into a first place tie with the 3-3 Eagles (who beat the hapless Tampa Bay Buccanneers 31-20) for first place in the NFC East. 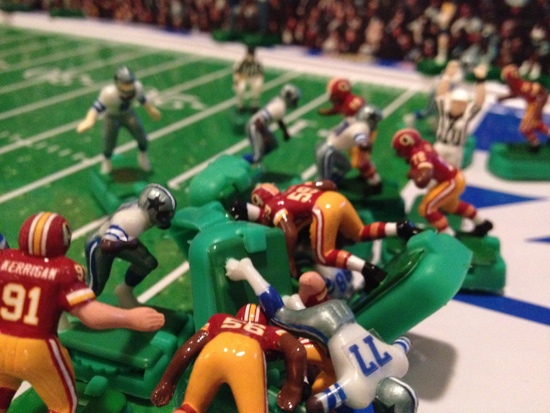 On their first drive of the game, Tony Romo led the Cowboys down the field on a 10-play, 80-yard drive that culminated with DeMarco Murray’s 4-yard touchdown score up the middle to make the score 6-0 early in the 1st quarter. 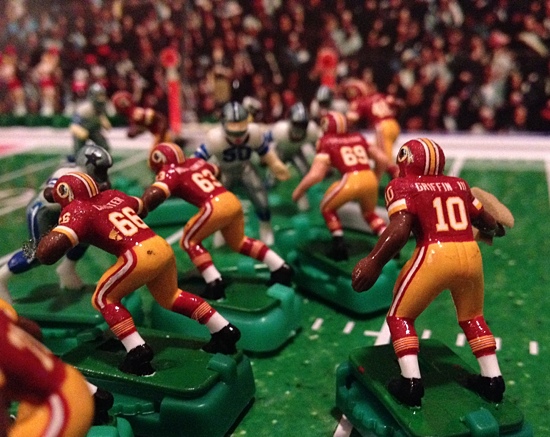 In what would turn out to be the story of the Redskins’ game, Robert Griffin took the offensive to the doorstop of six only to settle for three. On 3rd-and-9 on the Cowboys nine yard line, linebacker Sean Lee tackled Robert Griffin two yards short of the end zone. Kai Forbath’s 20-yard field goal made the score 3-7 with 1:38 left in the quarter.

After intercepting Tony Romo on their next offensive series, the Redskins failed to take advantage of his mistake and had to punt the ball five plays later. On their next offensive series, Dallas lost running back DeMarco Murray for the rest of the game with a sprained knee after a 6-yard run. Soon after, all-pro defensive end DeMarcus Ware followed Murray into the dressing room with a right quad injury. Right when it looked like things couldn’t get any worse for the Cowboys, things turned to their favor. 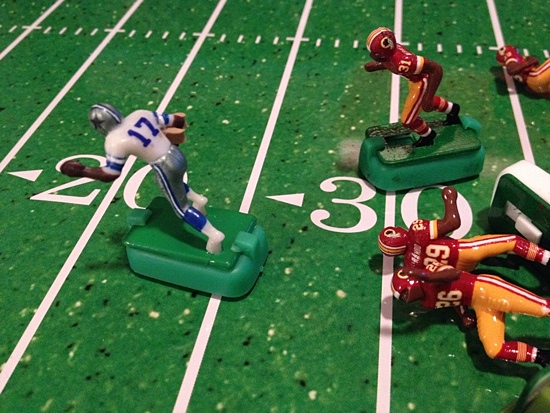 People will say Dwayne Harris’s 86-yard punt return for a touchdown was the play of the game, but they will be wrong. The play of the game came before it when Sav Rocca’s 44-punt was called back because of an illegal motion penalty on Jerome Murphy. Dallas could have opted to keep the ball on their 16, but they elected to make the Skins’ punt the ball again. If they don’t make that call, this play never happens.

The Redskins got the ball back with 2:26 left in the half and all three of their timeouts. Despite moving the ball down the field, they settled for a 32-yard Forbath field goal when the drive stalled on the Dallas 17 with time running out. This was a pivotal series in the game. If they get a touchdown on this drive, they go into the half down 10-14 and it’s anybody’s game. Instead, the Skins squander the opportunity with questionable clock management that allows precious time to needlessly tick off the clock. They do get three out of it, but going into the half 6-14 instead of 10-14 keps the momentum in Dallas’s favor. 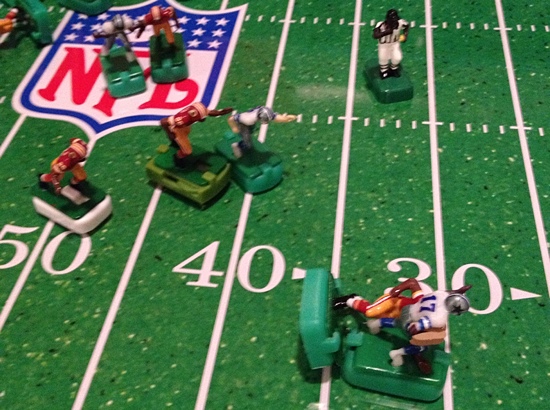 The Skins took the opening drive of the 2nd half to the Cowboys 9-yard line and yet again have to settle for a field goal. On the kickoff, Dwayne Harris took the ball all the way to the Washington 15 before he is tackled by E.J. Biggers. Two plays later, Tony Romo connected with Terrance Williams for his only touchdown of the game (He finished the day 18-30 for 170 yards with a TD and a pick) to make the score 21-9 after Dan Bailey’s successful extra point. 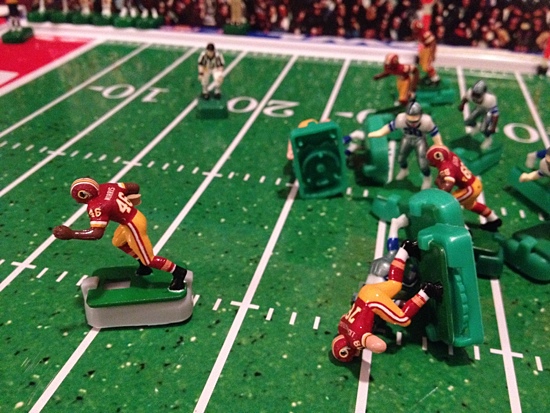 The Redskins answered the score with their first (and only) touchdown of the game two drives later on Alfred Morris’s 45-yard run on 1st-and-10. The touchdown put the Skins within striking range, down 16-21, with less than four minutes left in the 3rd quarter. 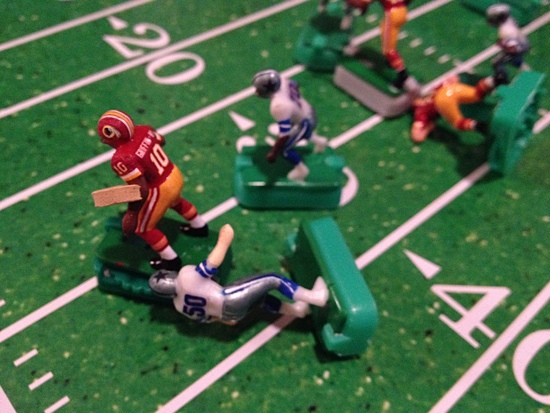 Down by five, Robert Griffin (who had 77 yards rushing on nine carries for the game) had the team moving, but the Skins’ drive fizzled on the Dallas 31. Forbath missed the 49-yard attempt. If he makes the field goal, the score is 19-21 and all the team needs is three points to take the lead for the first time. Instead, the Cowboys get the ball with good field position on their own 39, and the Redskins let another scoring opportunity go to waste. 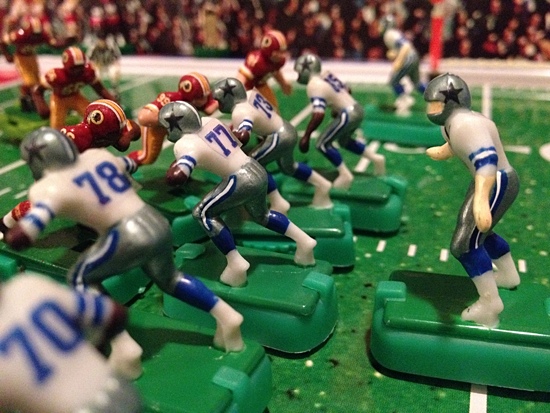 On the next Redskins offensive series, The Cowboys put the game out of reach. 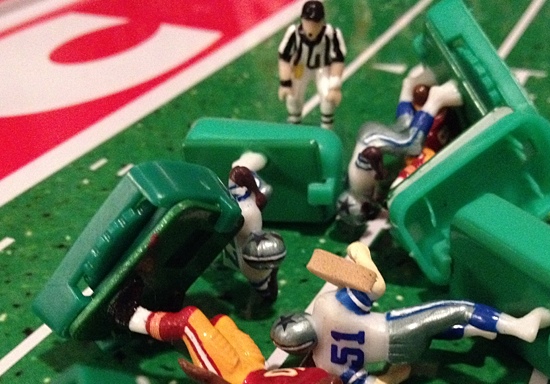 With the ball on the Skins’ 11-yard line, defensive end Kyle Wilber forces Robert Griffin to fumble and Dallas recovers the ball on the 3-yard line. Joseph Randle’s touchdown two plays later put the Skins in the hole 30-16 with less than nine minutes left in the game. 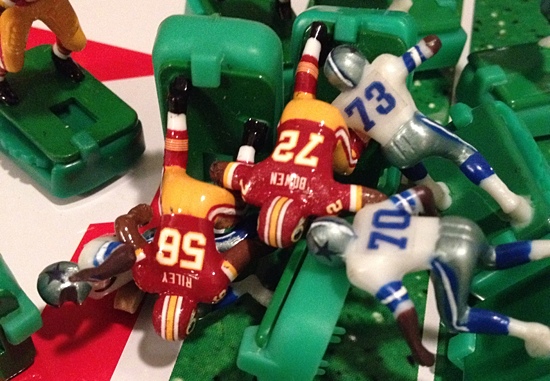 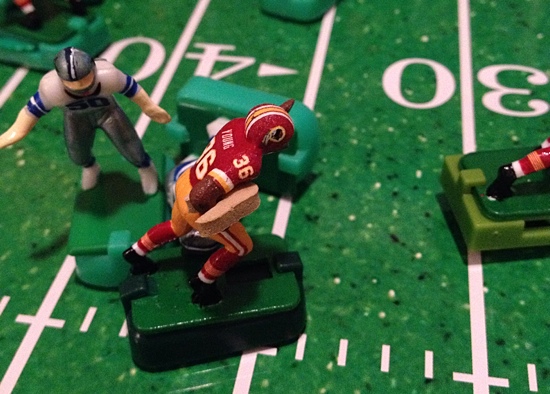 Down by two scores, the Skins drove to the Dallas 26 on a 19-yard run by fullback Darrel Young. It was his first run of the season, and it put the Skins in scoring position with plenty of time left in the game to mount a comeback. On 2nd-and-7, Orlando Scandrick sealed the win for the Cowboys when he intercepted Griffin in the end zone.

With the loss, the Redskins drop to 1-4 for year and more importantly, 0-2 in the NFC East. If the Redskins are to make the playoffs this year, the only way they are going to do it is if they win their division. For any 1-4 team down 0-2 in their division to think they have a legitimate shot at making the playoffs is usually a laughable pipe dream, but with the once mighty NFC East still up for grabs (except if your team’s name is the Giants), a playoff birth still remains within the realm of possibility for the Skins.

Griffin and the defense continue to improve, but time is running out on their season if they don’t start racking up some wins soon. Next week’s home game against the Chicago Bears (who are well-rested after making mince meat of the 0-6 New York Giants last Thursday) is a must-win game.

1-5 after next week and you can start thinking about next season.