Redskins vs. Chiefs: Now that was funny

With the season in shambles, it is only a matter of time before Mike Shanahan is fired. Tragedy is when I cut my finger. Comedy is when you fall into an open sewer and die. Mel Brooks

The Redskins-Chiefs game? Now that was funny.

At this point in the season, I’ve gone through all the stages of grief: denial, anger, bargaining, depression, and, finally, acceptance. I have come to terms with it. The Redskins are awful.

On the bright side, they don’t half-ass sucking. They’ve elevated sucking into a high art form. After the game, Robert Griffin said that he was frustrated. Frustrated? Dude, give up. The rest of the team has. Besides, you’re a young, handsome multi-millionaire who plays a game for a living. Sure, this season was a miserable failure, but there will be more. Just get through the next three games, and it will all be over.

And take it from me; since I gave up on the Redskins season, I’ve never been happier. I suggest you do the same. Just rehab the knee, spend some quality time with your new wife and get your head straight for next season. They’ll be a new coach and a whole new system to learn, but you’ll be fine.

Let’s start the healing process by looking at some of the “highlights” from yesterday’s game. 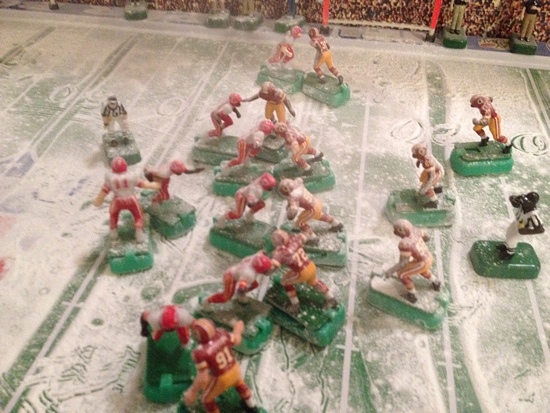 Alex Smith hands off to Jamal Charles for an 8-yard gain on 1st-and-10 on the Chiefs first play from scrimmage.

The best part of the game was the fact that it was snowing. That’s why I like football. Other than a lighting storm, games don’t get called due to weather like they do in other sports. It’s that aspect of the game that separates the men from the boys, and it’s a big reason why football is the most successful professional sport in America.

As Kai Forbath kicked the opening kick off, my phone buzzed with a text message.

“How bad do you think we are going to suck today?”

“We are going to suck AWESOME,” I typed back.

And that they did; The Redskins sucked AWESOME. 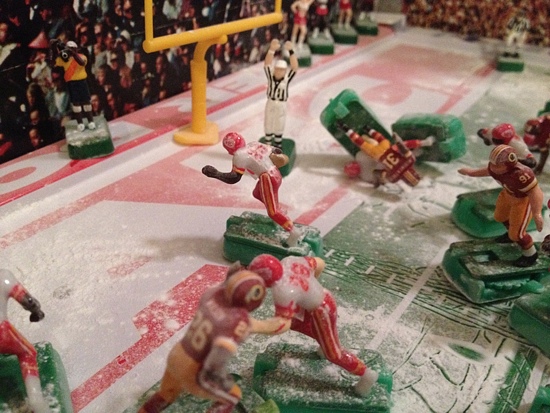 Jamal Charles’ 2-yard touchdown run was set up by Dexter McCluster’s 60-yard punt return that put the Chiefs on the Redskins’ 13-yard line. 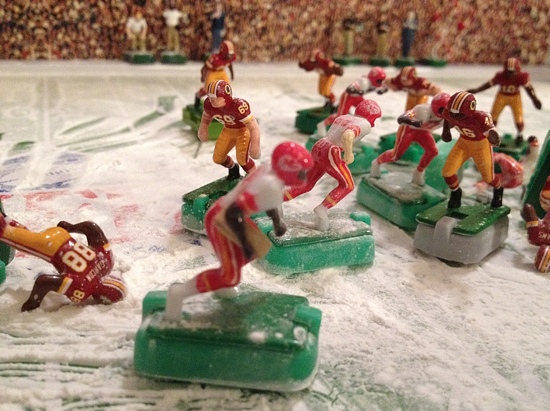 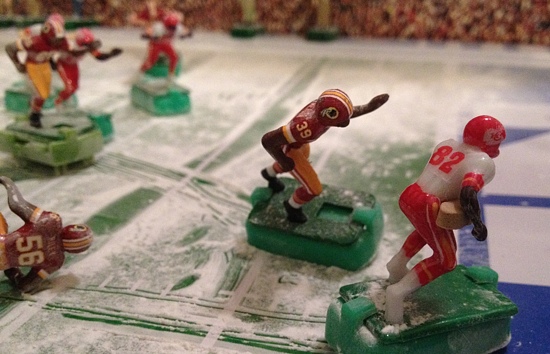 Three plays later, Alex Smith connects with Dwayne Bowe for a 21-yard touchdown to make the score 16-0 Chiefs late in the 1st quarter.

When Dwayne Bowe scored to put the Chiefs up by 16 with a little over a minute left in the 1st quarter, I started giggling.

“What happened?”, my wife said startled by my laughter. She seemed worried.

“Yes! It’s unbelievable! Nobody sucks better than the Redskins!”

I was in a good mood. So good in fact that I broke out into song.

“Hail to The Deadskins! Hail Misery! Braves on the warpath! Die For Ol’ DC!” 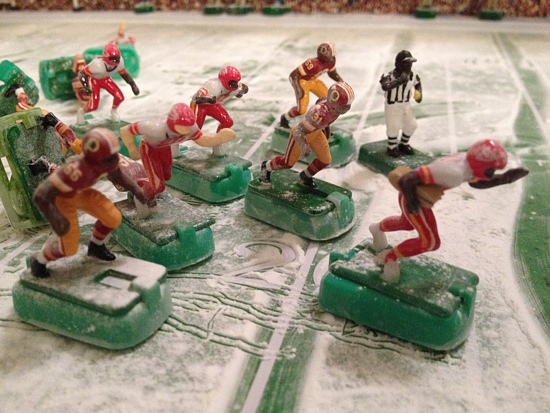 I was really enjoying myself.

“Why are you happy the Redskins are losing Daddy?”, my daughter asked.

“Oh, it doesn’t matter, baby girl. I’m just having fun being here with you and mommy.”

And that was no shit. The three of us don’t get to hang out enough together. They were decorating our Christmas tree as I watched the game and offered ornament-placement advice from the couch.

“Why are the Redskins so bad?”, she asked as she hung an ornament on the tree.

“I don’t know, but it sure is funny. You and mommy are doing a great job on the tree”

“It is the most beautiful Christmas tree ever, ” she said stepping back to consider her and her mother’s work.

I looked over and agreed. That was no shit either. The tree does look awesome. 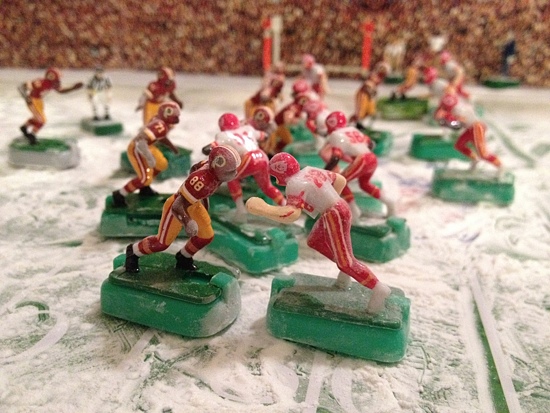 After Dexter McCluster’s punt return for a touchdown made the score 31-0 Chiefs, the Redskins started their next drive with a 2-yard run by Alfred Morris. They would score six plays later when Griffin connected on a 7-yard pass to tight end Logan Paulsen for Washington’s only touchdown of the game. 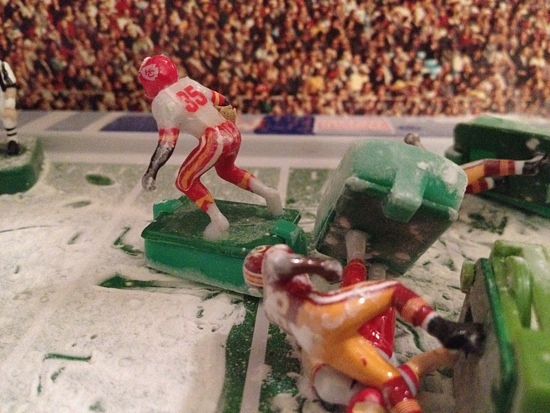 The Chiefs answered the score on the following kick off when Quintin Demps returned Kai Forbath’s kick 95 yards for a touchdown.

I have to admit that after Skins scored on a 7-play, 80-yard drive to make the score 31-7, there was a tinge of hope they might turn the game around. I knew it was silly, but I couldn’t help it. Thankfully, the Skins’ special teams didn’t let that thought linger. After giving up a punt return for a TD prior to the Skins’ scoring drive, they let Quintin Demps run a kick off back to end any thoughts of a Redskin comeback.

“Nina! Nina! Look at this.”, I called out to her as they were replaying the run, “look at that guy go.”

She ran over and looked at the screen. “Wow.”

The Skins did manage to get a field goal before half, but that runback was the end of the game. Fans couldn’t get out of Fedex fast enough. It was a ghost town in the stands in the 2nd half. And who can blame them? As I lied on the couch after a long week of work, eating cookies under my warm comfy blanket, I pitied them.

At that point, I started watching NFL Red Zone to see actual competition. 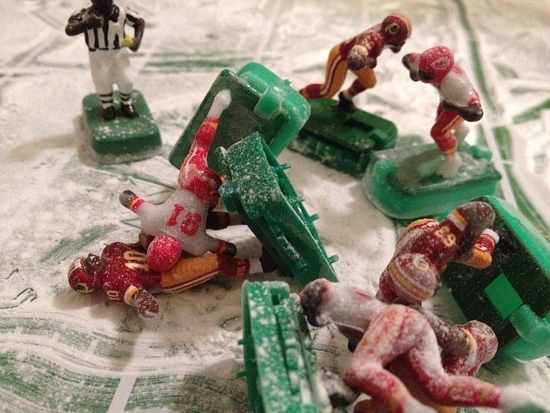 Tyson Jackson sacks Robert Griffin midway though the 3rd quarter. Mr. 3 finished the day 12-of-26 for 164 yards, a touchdown, and a pick. He ran for 29 yards on four carries and was sacked four times before Kirk Cousins relieved him in the 4th quarter.

Wow do you see this Skins game. Unbelievable. Is Shannahan next to go? There has been a lot leak out of that organization. I told you so.— Donovan McNabb (@donovanjmcnabb) December 8, 2013

With the season in shambles, it is only a matter of time before Mike Shanahan is fired. Prior to yesterday’s game, I thought (and hoped) he’d be around for another year, but after the way they played and all the rumors swirling around about his situation with the organization, I’d be surprised if he wasn’t shit canned by the time this report hits the web.

“This team is an embarrassment right now, to the organization and to the league,” Comcast SportsNet’s Chick Hernandez said after the game.