Down 21-7, the Denver Broncos scored 38 straight points to beat the Washington Redskins 45-21. I had a stick of CareFree gum, but it didn’t work. I felt pretty good while I was blowing that bubble, but as soon as the gum lost its flavor, I was back to pondering my mortality.Mitch Hedberg 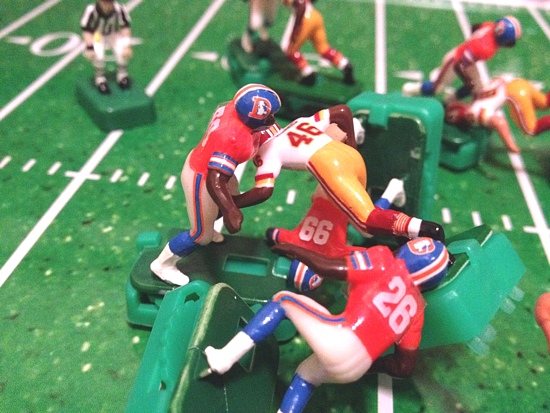 On 1st-and-10, Alfred Morris runs up the middle to the Denver 15 for a 4-yard gain early in the 3rd quarter. He finished the day with 93 yards on 17 carries and a touchdown.

Talk about a game of two halves. In the first, the Skins went toe to toe with arguably the best team in the NFL and had a 21-7 early in the 3rd quarter.

“It was like a blur,” DeAngelo Hall told ESPN reporter Eddie Pells after the game. “Someone asked me, ‘What went wrong, what happened?’ To be brutally honest, I don’t remember. I looked up t one point, 21-7, felt good, everybody smiling.”

Yes, things were looking good. Hall had just taken Payton Manning’s pass intended for Demaryius Thomas to the house to give the Skins a 20-7 lead. With the pick-six, Washington had a two possession lead and the momentum. At that point nobody would have guessed that Kai Forbath’s extra point would be last point the Redskins would score for the day. 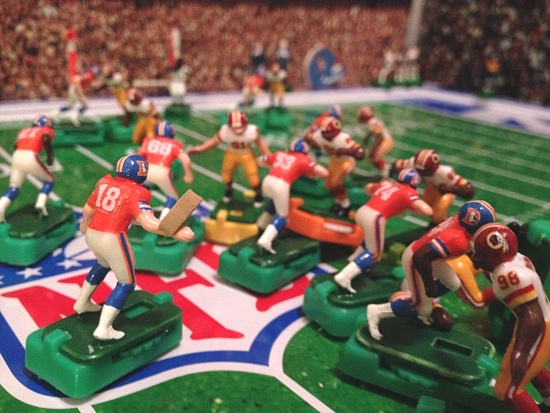 Payton Manning overcame four turnovers, and Denver overcame a two-touchdown deficit Sunday to score the last 38 points of the game.

Down by 14, Payton Manning and Broncos then rattled off 38 unanswered points to win the game 45-21. The defense kept the highest scoring offense in check for as long as they could, but the offensive and special teams kept giving Manning a short field to work with in the second half. The future first-ballot hall of famer took advantage of it: Manning finished the day 30-of-44 for 354 yards, four touchdowns and three interceptions. While nobody really thought the Skins would come out of Denver with a victory, Washington made a game of it longer than anyone could have imagined. 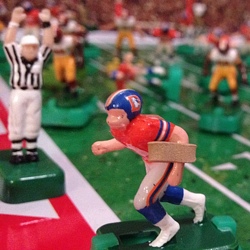 Wes Welker scores on a six-yard touchdown pass from Manning on the Broncos first drive of the game. The Redskins defense held the Broncos to their lowest first-half point total (seven) of the year.

Their piecemeal secondary kept the Broncos receivers off balance for most of the day in defensive coordinator Jim Hasslet’s physical press-based scheme. Just the fact that they held the Broncos to seven points as long as they did is impressive. Safety Jordan Pugh–signed Tuesday after starters Brandon Meriweather (suspension) and Reed Doughty (concussion) were sidelined for the game–had an interception and he, rookie Bacarri Rambo, Jose Gumbs, and converted cornerback E.J. Biggers harassed Broncos wideouts all day.

Manning figured out how to beat the coverage in the second half with screen passes run underneath the man coverage on the outside and on crossing patterns run into an exposed middle. Still, the defense forced four turnovers and continue to improve as a unit. The 45 points the Broncos hung on them wasn’t all their fault. The offense and special teams bare the burden of that blame. 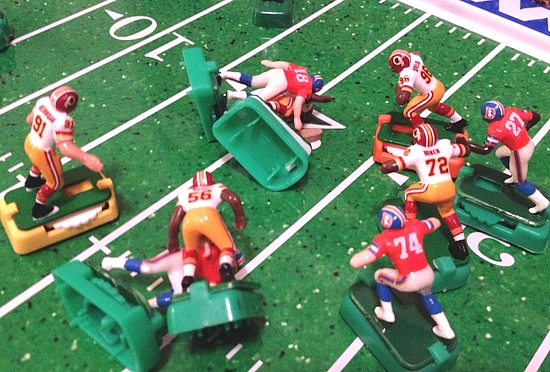 Brian Orakpo recovers a Payton Manning fumble in the 3rd quarter. Manning was called for holding for the first and only time in his career when he tried to keep Orakpo from recovering the Ryan Kerrigan-forced fumble.

I have no idea why Kyle Shanahan decided to stop running Afred Morris when they had Denver down 21-7. Doesn’t he know that you don’t fix what ain’t broke? With a 14-point lead and the run game clicking, Kyle called 10 pass plays and four running plays on their next four drives. During Washington’s first three drives of the tied fourth quarter Alfred Morris touched the ball once. It makes no sense. He kept trying to hit one deep instead of milking the clock with a combination of Morris and Helu. Failing to hit the big one, the Skins gave the ball right back to Manning and he got six for the Broncos every time they did. 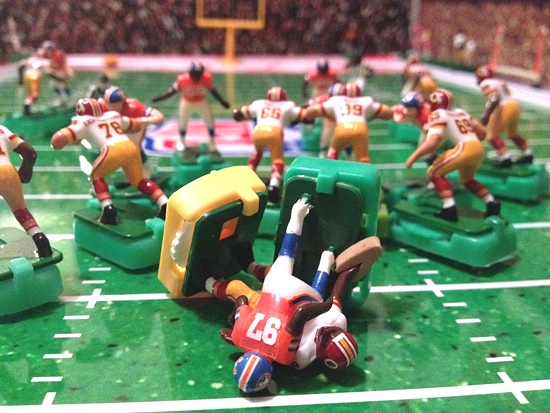 Robert Griffin throws his second interception and leaves the game with a knee injury when he is sacked late in the 4th quarter.

Another reason to run the ball (beyond the fact that it was working) would have been to spare your quarterback unnecessary punishment. Griffin was brutalized all day. He took a lot of hits that could have been avoided if Shanahan had stuck with the run. The Broncos got to Griffin up the middle on almost every pass attempt, and he left the game in the 4th quarter with his twice surgically-repaired left knee injured after getting hit by Malik Jackson (apparently he’s OK). For the day, he went 15-30 for a paltry 132 yards, a touchdown, and two picks. Rookie tight end Jake Reed and wide receiver Pierre Garcon had impressive plays, but the Skins receiving corp failed to separate from man coverage for most of the day. Coupled with the porous pass protection, the receivers consistent failure to get open makes Shanahan’s abandonment of the run in the second half all the more puzzling. 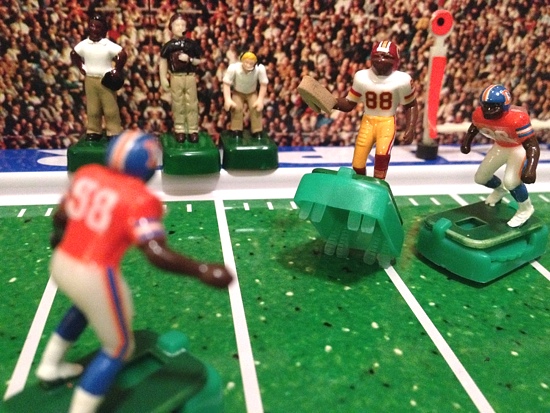 Wide receiver Pierre Garcon’s spectacular one-handed grab in the second quarter. On the next play, Griffin fumbled, and the team was forced to punt.

The Skins’ special teams once again contributed a play that made it easier for the other team to beat them. Tied at 21, Sav Rocca kicked a 15-yard punt. On the next play, Manning gave Denver the 28-21 lead with a screen pass to Knowshon Moreno for a 35-yard touchdown. That was the play of the game. After that, Denver proceeded to score and never looked back.

At 2-5, the Redskins are still in playoff contention behind the 3-5 Philadelphia Eagles and 4-4 Dallas Cowboys in the NFC East. A win this week against the 4-3 San Diego Chargers at FedEx is possible–depending on which Redskins team shows up. If the one that played the first half of this game shows up, there is a good chance they could beat the Chargers. But if the one that played in the second half takes the field, it is an absolute certainty that they will lose. And that’s how they’ve played this season. They’d end up winning more games if they didn’t first beat themselves.