RGIII quashes speculation that Coach Shanahan’s plan to keep him out of preseason games has caused a rift between the two. The amount of speculation surrounding my romantic life is astounding. It’s strange how involved people get: invested and angry, really disappointed.Sienna Miller

Coverage of the Redskins during the last 48 hours has been akin to listening to teenage girls gossip. What is causing these suffocating speculative pontifications? You guessed it. Mr. Robert Griffin. On Monday, he said this:

If you can’t watch the video (or if you did and still can’t tell what caused the onslaught of superfluous fluff), this is what caused it:

“I can’t BS that answer, nope. I don’t like it,” Griffin said during his Monday press conference when asked for the millionth time how he feels about Coach Mike Shanahan’s decision not to play him during the preseason, “I don’t understand the whole plan at all. I can’t lie about that.”

Now, even though he is laughing, people took this simple declaration to mean that, maybe, just maybe, what he was really trying to tell us is that he hates his coach’s guts. I didn’t hear it that way, and neither did Leroy, the exceedingly friendly volunteer working the entrance to the camp press room.

“Aw man, that ain’t nothing,” he dismissively observed, “I don’t know why they keep asking him about it.”

I always make it a point to talk to Leroy. He’s why I love the Redskins and the NFL.

All who call on God in true faith, earnestly from the heart, will certainly be heard, and will receive what they have asked and desired.Dr. Martin Luther King Jr. 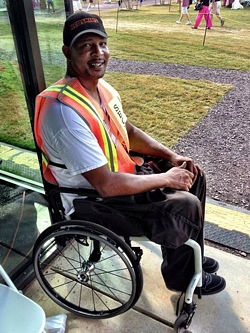 “I see us going 12-4” he says when I ask him how the season will go for the Skins, “If we can stay healthy, I think we can make it to the Super Bowl.”

This is what every Redskins fan thinks; this is the year we go to the Super Bowl. Being one myself, I’ve tried to make myself believe it, but with guys like Danny Wurfell, Jeff George, and John Beck under center for the Skins over the last 20 years, only the most committed zealots actually believed it. “You guys sound like a bunch of battered wives” a fellow Redskin friend’s wife said listening to us discuss yet another crushing loss during those long, dark years. And she was right too. We embraced every winning moment with a gratitude befitting the cure for cancer, and we took every needless indecency with the stoic resignation as if we deserved it.

“You guys are stupid” she told us more than once.

Things have changed though. Since Mike Shanahan and Bruce Allen took over operations, believing the Redskins had a legitimate shot at going 12-4 in the regular season is no longer the laughable pipe dream that it once was.

Leroy is a believer. If you wanted a partner in the shallow end of the pool to talk Redskins with as I did, you’d be hard pressed to find a better companion.

“He’s got a good solid family,” he answers when I marvel at how well Griffin handles all his notoriety, “And with family, anything is possible.”

I don’t know how Mr. 3 does it. His every word is scrutinized, dissected, and analyzed. People scream when he simply walks onto the field. In a world of fetid egos, he maintains an air of confident modesty despite the sometimes-creepy obsession that surrounds him.

“He’s a baller, man, with a good head on his shoulders. We don’t have to worry about him. He can handle it. As long as the knee is OK, we’ll be fine.”

At this point I make my daily point about the importance of Kirk Cousins.

“He’s the most important person on the team other than Robert.” I call him Robert as if we are close personal friends. I do believe it though. If Robert goes down, the Redskins won’t necessarily be­–as most teams are when their starting quarterback is sidelined–­totally fucked with Cousins as the number two.

This lead to a discussion about the Dallas Cowboys and who their back-up quarterback was. No one knew. Even the guys with official Redskins badges that started shooting the breeze with us couldn’t say who it was. “Kyle Orton, It’s Kyle Orton,” I said after checking the internet, “he’s just like Rex Grossman: a constant disappointment.”

After rehashing last year’s 7-week run of victories with an emphasis on their wins against Dallas (“It was the best Thanksgiving ever,” Leroy remembers with a twinkle in his eye), I wonder off to the practice field.

“You going to be here tomorrow?” I ask Leroy as I make my exit. 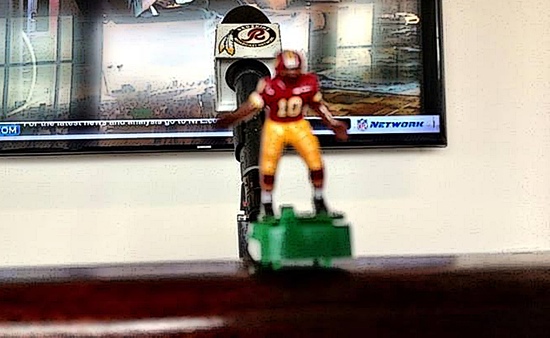 RGIII makes a surprise appearance at Mike Shanahan’s Tuesday afternoon press conference to dispel rumors of a rift between the two regarding his rehabilitation.

As far as actual news to come out of training camp this week, there’s not much of it. Robert Griffin made a surprise appearance at Shanahan’s usual afternoon press conference to assure everybody that he did not hate the coach’s guts for not playing him.

“Just want everybody to know if there’s any questions about if there’s a rift between me and Coach, or if there’s a conflict, there is no conflict,” Griffin said. “Coaches coach. I’m the player. Coach has a plan, and I’m abiding by that plan. I’m doing everything the coaches are asking me to do. I trust those guys. They want me to have a long career. And that’s what part of this plan is about.”

He handled himself with his usual grace, but as you can tell by looking at the photo, he seemed mildly disgusted. I liked that. It proved that he is human.

On the field, he went 12-of-15 in seven-on-seven snaps yesterday. His 35-yard zinger to Niles Paul hit the receiver in stride. It was a thing of beauty.

In Grossman news, his pass intended for Pierre Garcon was taken to the house by safety Jordan Pugh.

Cornerback Richard Crawford tweaked his right leg coming down awkwardly after trying to defend a pass intended for Lance Lewis. He left the field and later returned only to come up gimpy once more attempting to knock down a pass.

Left tackle Trent Williams’s injured left wrist is a continued concern. He looks to be in pain every time he has to use it, and that’s not good. A left tackle with one functioning wrist isn’t what you want for your offensive line going into a season.

I’ll be at camp today watching the team and talking to Leroy. And for the sake of all the unpaid volunteers working the camp, don’t freak out when Griffin comes to the sidelines.

It makes them nervous.