Redskins report: A superhuman knee and rookies looking to make an impact

This week the Redskins prep for their Thursday night exhibition game against the Tennessee Titans. For those who aspire to live in a high cost, high tax, big government place, our nation and the world offers plenty of options. Vermont, Canada, and Venezuela all offer you the opportunity to live in the socialist, big government paradise you long for. Marco Rubio

Whenever people tell me that socialism doesn’t work, I always say that it works great for the NFL.

Fans know everything about the NFL, but what most don’t know is that the National Football League is the most successful and profitable socialist organization on the face of the earth. Bill Maher astutely pointed this out in 2011, but in fairness to myself, I’ve been telling people that for years.

Walking around Redskins training, I wonder how many people realize that they are watching commie ball.

Jesus was the first socialist, the first to seek a better life for mankind. Mikhail Gorbachev

I got my first up close and personal moment with RGIII, and boy, is dudeman a physical specimen. It was actually kind of unnerving. Even on a field of chiseled physiques, Mr. 3 stands out; it was like standing next Michelangelo’s David as he lived and breathed.

Put in this way: he’s so beautiful that he makes everybody’s knees (mine included) quiver.

Speaking of knees, as he walked away, people started talking about how good his knee, the most talked about knee in modern sports, looked. “He’s superman I tell ya,”a young black woman with the longest fake eyelashes I’ve ever seen says to a older woman fighting a losing battle against getting mud on her shoes. “That knee is fine; he’s gonna take us to the Promised Land.” 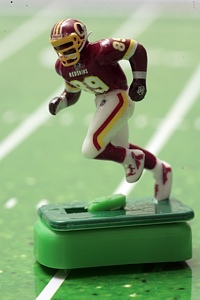 Watching him throw perfect 15-yard corner passes to Santana Moss and running back Chris Thompson, nobody worries about his arm. “He is a freak, man. He has yet to miss one yet” a guy tells his friend and hits him in the arm as I walk up to the quarterback session. “How’s Cousins looking?” I ask and they both look at me as if I just fired them for no reason. “Who cares about Cousins?” the other guy tells me rubbing his arm, “RG is looking great.”

The staff is more guarded in their optimism. “He is such an athlete, it’s hard to gauge what normal recovery is for him,” a guy with full Redskins credentials tells me as he hustles to get on the field, “We are taking every precaution with his recovery.” I wished him luck. “Thanks. We all have our fingers crossed” he smiled ducking under the rope to the sideline.

The gods had condemned Sisyphus to ceaselessly rolling a rock to the top of a mountain, whence the stone would fall back of its own weight. They had thought with some reason that there is no more dreadful punishment than futile and hopeless labor. Albert Camus

I feel for are the guys that won’t make the team. Watching Pat White is like watching a man who knows he’s about to die. With Cousins and Grossman ahead of him on the QB depth chart, he’s not long for the team–barring injury or stunning preseason performance. To even be on this field you have to be pretty damn special, but the gods play no favorites. You may have been the best player in high school and college, but here in NFL, you are just adequate: a preseason arm to huck passes before the inevitable ax falls. Nothing is written in stone, but if this guy makes the team, it will be akin to peace in the Middle East.

Leroy–the muscular, wheelchair-bound volunteer assigned to checking press credentials at the main facility–loves being around the Redskins. As I walk up to the entrance, his gold-tooth smile is beaming. “How are you doing today, sir,” he says like he won the lottery. I asked him how he liked working for the team. “Man, being here is like a dream come true. I mean, it’s the Redskins, you know what I mean?” I assured him that I did.

“So what do you think about the team this year?”

“It’s been a long time coming that’s for sure. We ain’t been good in a longtime, but with what happened last year, we actually have a team.” he says contemplating nearly two decades of gridiron disappointment. “We ain’t had a team in years!”

It was then that we started to run off the sad list of quarterbacks that the Skins have had under center before Mr. Griffin. “Tony Banks? Damn, I had totally forgotten about him.” he says in disbelief, “What about Patrick Ramsey? I thought he was going to die out there with all those hits he took.”

That was hard to watch. Ramsey was repeatedly smeared across the field during the Steve Spurrier error.

“But all that’s over now. We got Griff behind center, a good young team and a great coaching staff. I believe our time has finally come.”

DeAngelo Hall looked good, and despite tweaking his ankle was on the field for a second consecutive day. He caught a series of laser beams fired from the Jugs machine with only his left hand. It was amazing to watch. Apparently, the brash defensive back dislocated his heavily wrapped right ring finger on Monday when he and tight end Logan Paulsen started beating on each other. Because of the altercation, the passes he caught with two hands caused him to wince. It didn’t really seem to bother him all that much though. He seemed to be enjoying himself.

Good habits formed at youth make all the difference. Aristotle

Near the end of the day, rookies Phillip Thomas, Bacarri Rambo, David Amerson (who had an impressive, leaping interception of a Rex Grossman pass), and Chase Minnifield were in the defensive backfield with forth-year pro E.J. Biggers serving as the nickelback. Rambo and Thomas will make their NFL debut Thursday in Tennessee as the first-team free and strong safety. If–and this is a big if–these two rookies can contribute to the team immediately, the defense should improve by leaps and bounds. Both continue to impress, and this will be their first chance to show what they can do during an actual game.

I firmly believe that any man’s finest hour, the greatest fulfillment of all that he holds dear, is that moment when he has worked his heart out in a good cause and lies exhausted on the field of battle–victorious. Vince Lombardi

And now, after a couple of weeks of beating on each other, the team finally gets to beat on someone else. The Titans, lead by third year coach Mike Munchak, are in the same boat. They want to kill people too.

Training camp is meant to be hell; it is a brutal process of weeding out. In the words of Marv Levy, “When it’s too hard for them, it’s just right for us.” And for a team to shine through the exhaustion so it’s just right for them, they have to have the mental and physical fortitude to do it. You can see it in the player’s faces. They look like they are being pounded into rocks.

Add to this, the desperation of players trying to make their respective team’s rosters, there will some serious drama going down at LP Field Thursday night.

It’s the only reality TV I watch.