Choosing athleticism over showmanship, Mother State Roller Derby works to redefine perceptions of the popular spectator sport. You won’t see these women picking fights or clotheslining their opponents… but that doesn’t mean they can’t kick some butt out on the track. (Includes video!)

Late Monday night, as a few straggling customers exited through a single swinging door to Skateland of Richmond, they found themselves crossing paths with the eight young women of the Mother State Roller Derby (MSRD) league arriving for one of their three-hour evening practices.

Most donning all-black from head-to-toe, the eight infiltrated the vast arena that would soon house a fast-paced, high-contact — and intense, to say the least — sport that is steadily gaining recognition across the nation.

In a revival of a speed-on-wheels movement, the spectacle-turned-sport of roller derby has come a long way since its start in the 70s and early 80s, according to The Women’s Flat Track Derby Association (WFTDA), the international governing body for women’s roller derby.

The girls of MSRD said they are concerned that while a majority might perceive derby as a “spectator sport,” the emphasis is still being placed on “spectator” and not “sport.”

Now, the league along with their coach, Mike Maines, said they are taking an alternative approach to derby — bringing it back to its athletic roots.

“We’re helping the sport move forward,” Maines said. “Many other derby leagues are more concerned with the sociological aspects that are part of the derby culture. Yes, we are friendly — but it’s ultimately secondary to our purpose.”

Maines, who has been coaching MSRD since he and a small group of current members started the league in January 2010, explained that while they value the relationships they have made from derby, their objective is to break the stereotype that derby is purely entertainment.

“You’ll see derby leagues with vulgar names or funny outfits — we don’t put on a show in that way; we put on a show out on the track,” Maines said. “We approach the sport very seriously and we’re interested in improving it as such, not the social perks and fun.”

According to Maines, he and some of the girls began MSRD because of the differences in their views and approach to derby.

“I believe, and my girls believe, that a wider variety of people could enjoy derby if it went back to athleticism,” Maines said. “The general public gets pigeonholed into this stereotype that derby can be offensive or funny — and so, it’s not taken seriously.” 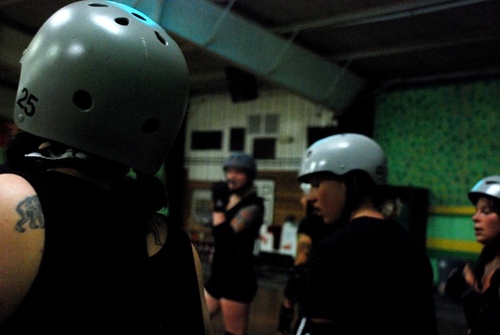 As the former coach of the River City Rollergirls (RCR), Maines said he split from the other Richmond-based derby league because some league members were more interested in the aesthetics of derby and not its athletics.

At the start of 2010, Maines and a small group of girls (formerly RCR league members) broke away from RCR and began recruiting for their newly-formed league, MSRD, which has played in about four scrimmages against other nearby teams in and around the Richmond and Washington, DC areas and remains undefeated.

“We wanted to form a team that was really focused on the sportsmanship and bring it to more people’s attention as a real sport,” said MSRD league co-founder Nikki Towner. “You see a lot of leagues that wear the tutus and have their derby names, which is fine — there’s a time and place for that — but we wanted to bring the athleticism out and really show the sports side of it.” 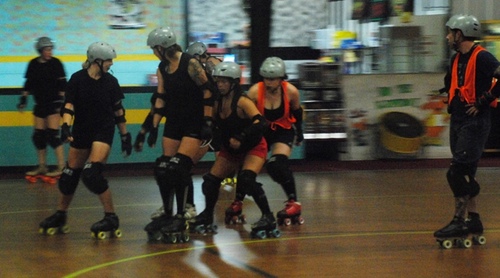 Towner, who has been skating for four years, said she thinks much of the public views derby as old school derby.

“I think people, the first think of when they hear when they hear ‘roller derby’ is of derby back then — when people got their legs taken out from under them and clotheslined others, but that’s not the case anymore,” Towner said. “Derby has definitely evolved more and developed more into a sport.”

According to fellow MSRD league co-founder, Lisa Kincade, derby rules can get complicated, but the basic objective is fairly simple.

The WFTDA website states the basic outlines of derby consist of:

To score points, the WFTDA states:

Kincade said there strategies and tactics to use in order to stop a jammer from scoring, but these tactics have changed along with the sport. For example, as Kincade pointed out, elbowing, tripping, punching, and a number of other overly aggressive moves are against rules and regulation.

“There’s no fighting allowed,” Kincade said. “I’ve only seen one fight ever and I’ve been playing for three-and-a-half years and event then it was pretty intense because you’re just saying to yourself, ‘I can’t believe this is happening.’”

As for tactics that are acceptable, Kincade said whipping (when a player throws their arm out against an opponent to slow or stop them) and jumping over fallen opponents are commonly used.

“It’s definitely one of the best spectator sports because people can get into it — they’re right there next to the track,” Kincade said. “The action and its fast pace make the sport a lot of fun.”

Despite mixed feedback from their fundamentalist approach to derby, coach Maines said MSRD is currently practicing for their first home bout against the DC Cherry Blossoms on Sunday, September 19.

Maines said the MSRD league is always recruiting new players. Skating experience is not a requirement, but any previous experience is a plus.

“When it comes down to it, all you need is the drive,” Maines said. “These girls, they all want the same thing and have the will to do it.”

The MSRD’s first bout will located at Skateland at 5521 Hull Street Road. For this bout and for the league in general, MSRD looks for sponsors and volunteers. Sponsors provide the league with uniforms, travel expenses, rink time, and bout preparations, among other things.

For more information about joining or volunteering for MSRD, contact Lisa Kincade at lisak@motherstaterollerderby.com or visit the MSRD website.

To view roller derby rules and regulations and to learn more about the WFTDA, visit their website.

Take a look at some footage of the ladies of MSRD practicing, meet some of the team members, and learn more about the ins and outs of roller derby: